Secrets from the set of ‘Big Bang Theory’ 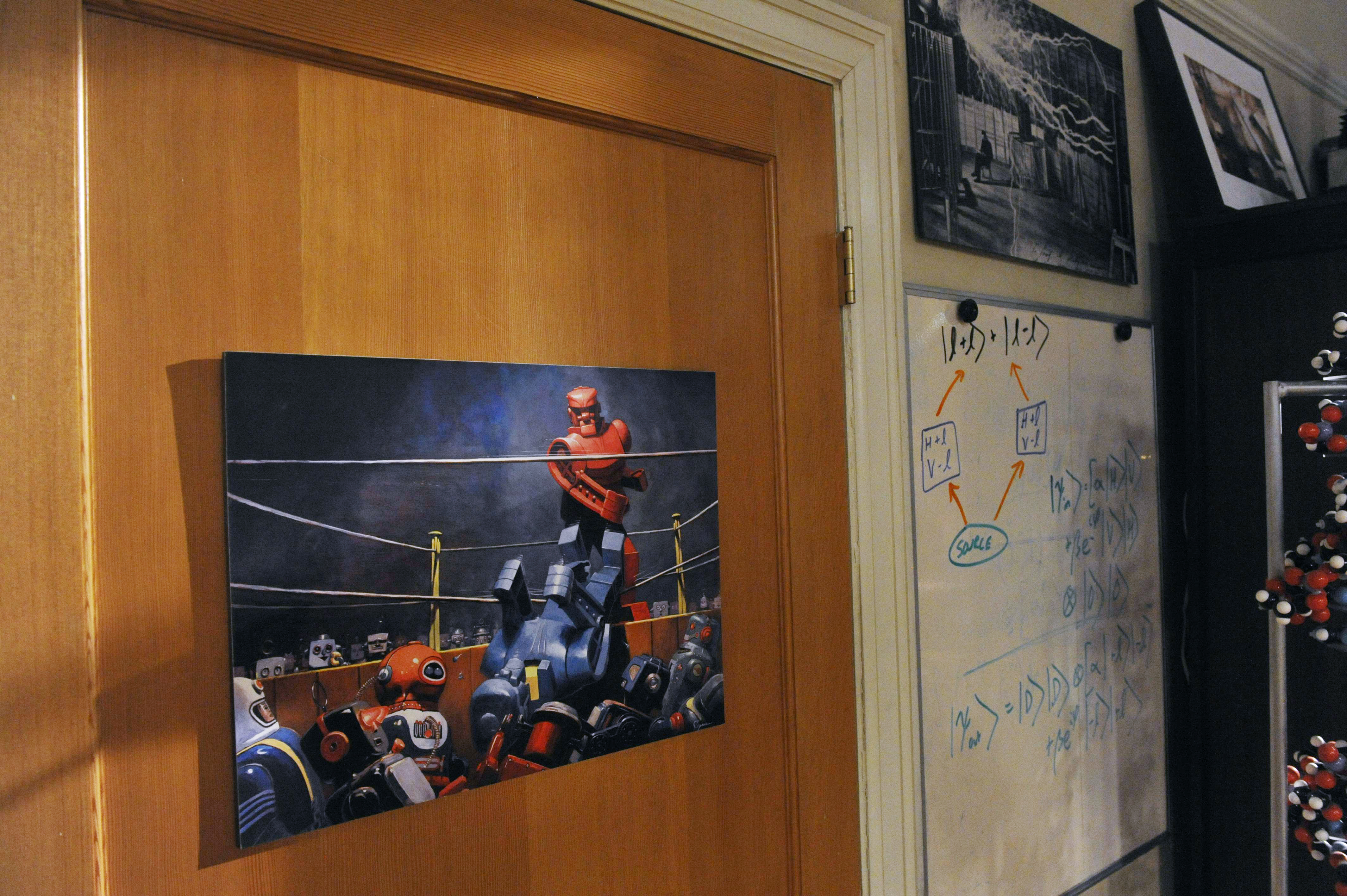 (CNN) — It’s one of the most famous sets on television right now.

On the hit CBS comedy “The Big Bang Theory,” a group of scientists and their friends and neighbors go through the ups and downs of nerd life, while surrounded by memorabilia that would make any collector drool.

“Being on those sets, seeing the detail and production design — they’re all authentic,” actor Simon Helberg (Howard) told CNN while visiting the set as the cast and crew prepared to film this Thursday night’s episode.

Jim Parsons, who plays uber-nerd Sheldon Cooper, is not quite as informed on all manners science and comic books, but can appreciate the details.

“I know that clouds make rain and that Superman dated Lois Lane and after that, I kinda dry up for what else to say,” he admitted.

“But you don’t have to understand all of it to feel the excitement of so much creativity and passion and work and the objects on our set all vibrate with that kind of energy. It really informs the whole pace of the room.”

The cast, as well as fan favorite guest star Wil Wheaton, spoke to CNN backstage (which is something of a museum of nerddom all its own, with toys and comic book character posters everywhere) about some of their favorite parts of the elaborate set, including some things viewers at home might not pick up on right away.

(“The Big Bang Theory” is from Warner Bros. Television, which is owned by CNN’s parent company, Time Warner.)

CNN: What’s it like being constantly surrounded by all of these representations of nerd culture?

Mayim Bialik (Amy): I’m a scientist, so I like all that nerdy stuff. That was one of the things that struck me was the attention to detail. Our set dressing and props department are really important to us, and that’s important to the producers as well.

Kaley Cuoco-Sweeting (Penny): It’s like a theme park walking onstage. I’ve spent a lot of time in that living room set, so I know a lot of the stuff in there — I like how the prop department lines the hallways with all the things we’ve used. It puts me in the mood when I’m here at work.

Wheaton: I feel like I’m walking through my own house. I have a lot of the same action figures and comic books.

CNN: What are some of your favorite pieces of the set?

Johnny Galecki (Leonard): The “Star Wars” stuff brings me back because I was a huge “Star Wars” fan growing up as a kid. There’s really two camps here: “Star Trek” or “Star Wars.” I’m very much entrenched in the “Star Wars” camp. As a kid, I had dozens of “Star Wars” figurines. That’s how I told stories and in a way I’m still doing that, using myself as the vessel instead of the figurine.

Wheaton: When we work in the comic book shop set, I want to take a lot of the books home with me. There are some incredible DC archive collections that are just used as set decoration. I walk in like Indiana Jones, “This belongs in a museum.”

Helberg: I am a big “Game of Thrones” fan — that sword is a real sword and that was cool. There are also some very racy figurines — these women are really decked out. One is sort of a sadomasochistic fever dream.

Melissa Rauch (Bernadette): When we’re doing stuff in Howard’s room, there’s a lot of action figures in there. I was always very intrigued by how detailed the action figures are, especially the women. They are very, very detailed — they’re like miniature blow-up dolls.

Parsons: I do have a unique relationship with (Sheldon’s spot) on the couch. We do a lot of scenes in that apartment set and, as an actor, one of the first things you figure out is where you will physically start a scene on the stage and, nine times out of 10, I start on the spot on that couch. It’s as close as I think I’ll ever get to Archie Bunker’s chair.

Cuoco-Sweeting: I love being in Penny’s apartment. Being in the kitchen, drinking wine, feels like what I do at home.

Galecki: I have a bit of a superstitious tradition of decorating my dressing room with things the character would have, so I took quite a lot of set dressing for my dressing room. In Season 4, I thought this is enough. I started tripping over board games.

CNN: Are there any little details that fans might not be aware of right away?

Galecki: Guests are always interested in the stairwell, and that it only goes down about seven steps and there’s a wall there. You’d think they would have given us more room. We really have to pack ourselves like sardines to be out of the camera’s view — the Hollywood magic that is never quite as glamorous as one might imagine.

Cuoco-Sweeting: People always ask if we eat the food (during scenes). I must be the only one who really eats the food. I save my appetite until we do those scenes — I want to look real, man!

Bialik: One of my actual genetics textbooks is in the guys’ apartment.

Nayyar: At the back of the guys’ apartment is a “Star Trek” communicator. You can’t see it but it’s a big deal. It’s really cool — if you look carefully enough you’ll see it.

Wheaton: One of my favorite things I noticed two seasons ago, is in Sheldon and Leonard’s apartment, all the way upstage where the window looks out into Pasadena, they have action figures up there and one of them is Aquaman, who is articulated so he’s doing the Vulcan “Live long and prosper” salute. And it’s super-rad because it will never read on television. I think it’s such an awesome little detail that of course one of these guys would have done that — because I would have.