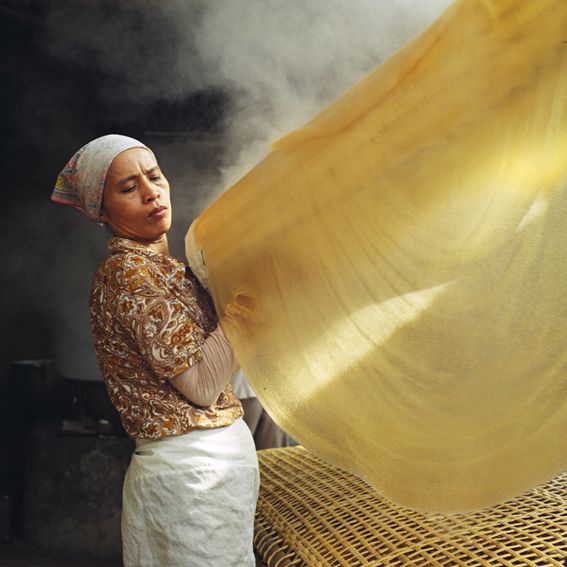 (CNN) – A woman, her face a mask of concentration, hefts a huge sheet of translucent dough into the air as sunlight and steam – or perhaps flour dust – fill the air.

This atmospheric moment, captured in a village in Vietnam by British photographer Tessa Bunney, was awarded the prize for best food photography this week in a competition that attracted more than 6,000 images from around the world.

The Pink Lady Food Photographer of the Year competition showcased dozens of entries that showed that some travel photos offer a feast for the stomach as well as the eyes.

Another, by Jonathan Gregson, showed steam rising as a worker roasts coffee beans in Rwanda — a photograph you can almost smell as well as see.

His image, which shows dirt-blackened pigs in a sty surrounded by garbage, was presented a “politics of food” award for showing the realities of food production.

Bunney, who is based in Laos, picked up $8,400 for her noodle-making image.

“There were 6,000 images entered internationally and the standard was phenomenal.

“Tessa’s image stood out from the rest, however, for its beautiful composition, the expression of utter absorption on its subject’s face, and the capture of a perfect moment in time as the noodle dough flies through the air.”