Virginia Beach Police are looking for a man involved in an abduction attempt that occurred on Sunday afternoon.

Police say the victim reported that she went to Sunday's Blue Box tanning salon in the Holland Plaza Shopping Center. After finishing her session, she walked to her car on the side of the building.

At this time, police say the victim was approached by a man who forced her into the passenger seat of her car while he got into the driver's seat and began heading south on South Plaza Trail.

The man demanded money from the victim. They arrived at Navy Federal Credit Union in the 4000 block of Virginia Beach Boulevard at 4:00 p.m, where the victim was forced to withdraw an undisclosed amount of cash.

The suspect then got into the passenger seat of the car and demanded that the victim drive him around at his discretion for several hours.

Eventually, the man directed the victim to the Timberlake shopping Center and parked the car in a side parking lot.

The man then tied the victim up and left her in the car as he walked away into the Timberlake Shopping Center.

Police are asking for anyone with information about this crime to call the Virginia Beach Crime Solvers Office at 1-888-LOCK-U-UP. 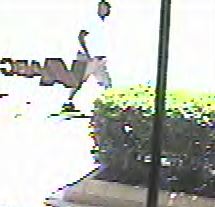