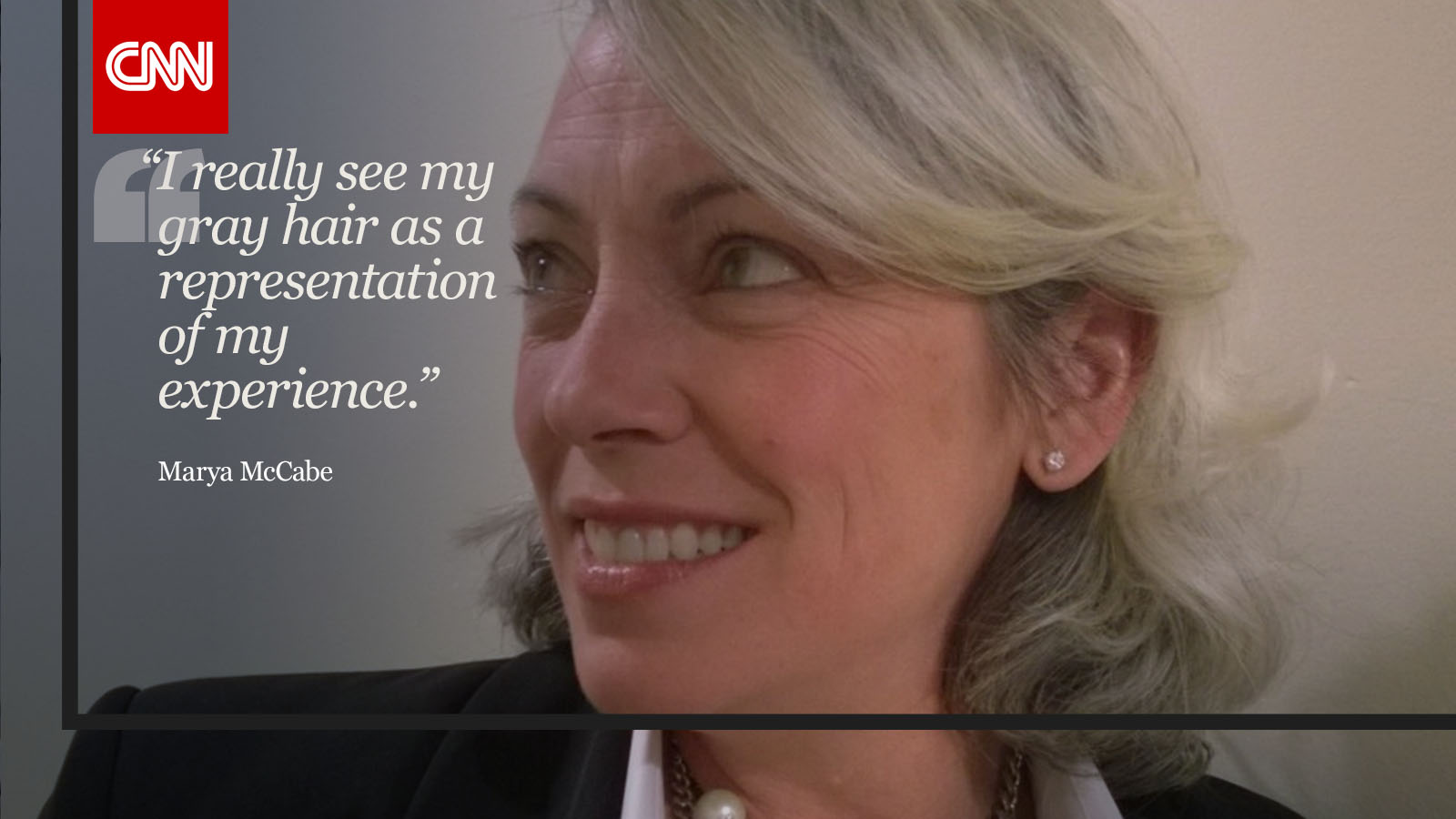 (CNN) – Our mothers and the women we look up to offer our first lessons in beauty and personal maintenance.

They tell us whether it’s acceptable to leave the house without a painted face, well-coiffed hair or shaved legs. They send those messages both indirectly, through their own beauty rituals, and directly, with a well-placed, “No, you are not going out looking like that!”

Ultimately, what we decide to do as adults comes down to individual choice and evolving beauty ideals, but mom’s old routines can stick with us as we age, especially when it comes to gray hair. Even as fashion, makeup and hairstyles change, the pressure for women to cover up gray hair endures, no matter how many lists or articles tell us to embrace natural beauty.

And yet, there’s hope! Take it from these women who chose to stop covering their grays in their 20s and 30s. They have nothing against women who choose to color their hair, but this is what works for them. They shared their most compelling reasons for embracing the look. Let us know in the comments what you would add or dispute!

Watching her mother fret over finding the right color and hairstylist made Kelly Barrows want to do the exact opposite. She never understood why her mom did not appreciate her thick, beautiful curls, which Barrows herself coveted.

“She’s so beautiful and all she sees is what she could change,” she said.

While Barrows, 27, can’t influence her mother’s attitude toward aging or appearance, she can change her own. Her grays are just starting to come in, but she’s looking forward to more, and she has no plans to hide them.

“I like showing my mom that I can take pride in it and it’s not something to be ashamed of.”

Christine Candelaria also has vivid memories of how the women in her life were tied to the messy rituals of dying their “canas” every few months at home: stains, chemicals running down their foreheads, accidentally choosing an unflattering shade.

“I clearly remember sitting on my mom’s bed in eighth grade, watching her hair ritual, and declaring out loud that I would NEVER dye my hair. I remember thinking to myself that I wanted to grow old gracefully and naturally.”

Or, you can honor the silver foxes in your life

Ty Alexander’s mother and father never colored their hair, so she was used to seeing adults own the look with confidence.

“For me it was just what our family did. It wasn’t a second thought,” said 37-year-old Alexander, who stopped coloring her grays when she was 25. “I knew I would stop dying it because that’s what we all did.”

Larissa Pissarra, 42, also took style cues from her mother’s natural approach to personal maintenance. Her mother wore minimal makeup and never colored her hair, not even when it started graying.

“She looked great no matter what,” she said. “When she started graying, she didn’t do any color, and she didn’t seem to care.”

It’s cheaper than being a “slave” to the stylist

Pissarra didn’t pay much attention to her grays as they started coming in in her 20s. But when the odd strand turned into streaks, her stylist gave her an ultimatum.

“She said, ‘You have to decide right now. You either start coloring now, or you never start, because after you start you become a slave to it,'” Pissarra recalls.

It was an easy decision for Pissarra, who didn’t wear much makeup or do much with her hair to begin with. Her hair was healthy, so why mess with it?

“At first it was more of a financial and practical thing. I thought it would be reasonable for me,” she said. “Then I started reading about chemicals and stuff and realized I didn’t want all that in my head.”

You can still play around with products and styling

Alexander’s hair has been through just about every style and color since she began experimenting with her look at age 14. By the time she reached her mid-20s, her hair was getting brittle from all the experimentation.

By then, the gray streaks that her parents passed on had become visible. She decided to stop coloring before her hair fell out, but that didn’t mean she had to stop experimenting.

Alexander tries different shampoos, conditioners and DIY remedies to keep her color from getting dull or brassy. Her go-to method is a mixture of peroxide, water and conditioner to strip product from her hair and keep the color bright.

It’s all about perspective, and those who embrace their grays often see them as badges of honor that reflect experience and wisdom accumulated over the years.

“Obviously part of it is genetics, but I also feel like it’s part of who I am,” said 49-year-old Marya McCabe, who stopped coloring her hair in her early 30s.

Three years ago, the married mother of two left Microsoft after more than a decade to start her own consulting firm. She thinks her gray hair lends “credibility” to her background, both personally and professionally.

“I really see my gray hair as a representation of my experience,” she said. “I did something to earn these grays.”

For Kelly Barrows, her first few grays validated the stress she felt from motherhood. Barrows suffered from postpartum depression after the birth of her first child, though she didn’t realize it at first. She was overwhelmed by the new responsibilities and anxious over losing her identity, but struggled to see it as something more than “run-of-the-mill” experiences of any new mother.

“To come out of it gray-haired is affirming that the stress is real and that the struggle is real,” Barrows said. “I have real visual evidence to show that it’s been hard. It wasn’t in my head or invented.”

It makes you stand out

Apart from her silver sheen, McCabe considers herself pretty average for a Seattle woman; she skips makeup and wears jeans on most days.

“I’m very vanilla in every other way, but my hair makes me unique,” McCabe said. “My hair makes me stand out physically and because I’ve chosen to do something different it has become sort of an identifier for me.”

When Alexander was preparing to launch a lifestyle blog in 2010, she knew after more than a decade of experience that her hair would be the first thing people noticed. Her blog, “Gorgeous in Gray,” celebrates her look while dishing on the latest in style and beauty news and trends.

“It’s the first thing people see, which is also one of the marketing reasons I chose it,” she said. “I use my hair to keep my name in people’s mouths.”

Strangers will compliment you

Alexander swears that not a day goes by without someone stopping her in the street to talk about her hair. Usually, it’s a compliment followed by questions about her age, her history with hair care and how she maintains it.

Larissa Pisarra says she gets more compliments from strangers on her hair with each passing year; some even ask if her silver highlights are the product of a salon.

“Women come up to me and say ‘You inspire me.’ That makes me feel good,” she said.

“Guys make compliments, too. They don’t seem to care as much about our hair as we do. It’s more in our heads than it is in theirs.”

Another reason going gray is one more option to add to your beauty toolbox: You can always change your mind!