Facebook rolls out its own dinosaur: Meet the ‘Zuckasaurus’ 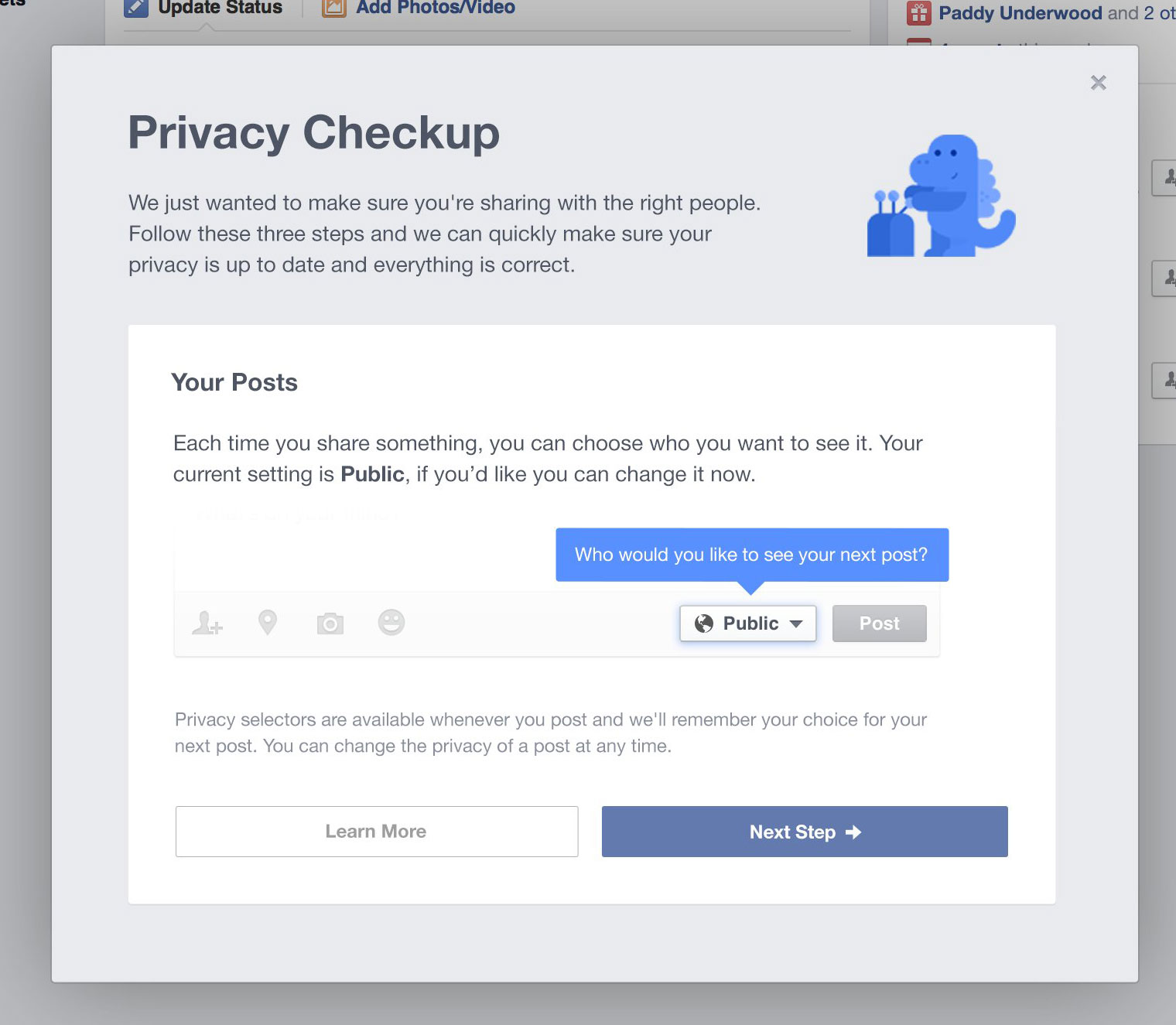 (CNN) – It’s been a big week for dinosaurs. With “Godzilla” still rampaging at the box office, Facebook also rolled out some privacy changes along with a friendly blue dino to help explain them all.

In addition to making settings for all new users default to “Friends Only,” Facebook announced Thursday it will prompt existing users to review their privacy settings.

Your new guide to the intricacies of controlling your personal info on the world’s biggest social platform? A blue cartoon dinosaur with a snaggletooth, tapping away at a laptop that looks like some kind of Macbook.

“Hi!” reads one of the new pop-up windows, presumably relaying the sentiments of the new Mesozoic spirit animal. “Sorry to interrupt. You haven’t changed who can see your post lately, so we just wanted to make sure you’re sharing this post with the right audience.”

Fair enough. It’s part of an effort that Facebook has been undertaking for months to clarify and tighten privacy settings, something critics have dinged the site for in the past.

But why a dinosaur?

“Our team looked at a few different characters, saw the dinosaur, and just thought he was the friendliest and best choice,” said Raylene Yung, an engineering manager on Facebook’s privacy team. “Once we tried him out, we saw some great results and welcomed him to the team.”

Dubbed the “Zuckasaurus” by The New York Times in a nod to Facebook CEO Mark Zuckerberg, the (thankfully) un-Barney-like creature joins an ever-growing pantheon of tech mascots.

From TiVo’s smiley, leggy TV guy to Google Android’s android, there has been no shortage of cutesy characters introduced by Web and tech companies to reinforce brand identity or help set themselves apart from the masses.

As a species, they’ve provoked a wide variety of reactions.

Some, like Reddit’s beloved Snoo, the Twitter bird and the early Web’s Ask Jeeves butler invoke warm feelings among users. Even Twitter’s “Fail Whale,” which showed up years ago whenever the platform was over capacity, had its fans.

Other mascots weren’t so lucky.

Clippy, Microsoft’s talking paper clip, became one of the computing age’s most mocked, if not reviled, characters. Early Windows users were forced to click him out of existence over and over again as he popped up to give advice of sometimes questionable value. Plus, he’s a talking paper clip. Kind of creepy.

Then-CEO Bill Gates retired Clippy in 2001, though he was brought back in 2011 for a Microsoft Office tutorial — but only if users chose him.

Then there was the Pets.com sock puppet. Amusing enough at first, the puppet’s schtick had already started getting old by 2001, when the site went belly up, its once-ballyhooed stock worth a whopping 22 cents a share.

Will Facebook’s privacy dino catch on? Or will he (or she) be mocked into extinction? Only time will tell.

On Twitter, some users Friday were calling the creature a “safeasaur” or a “privasaurus.”

The New York Times said the Zuckasaurus “could suffer the cruel fate of other tech industry cartoon characters if Facebook slips on its promise to be more mindful of users’ privacy.”