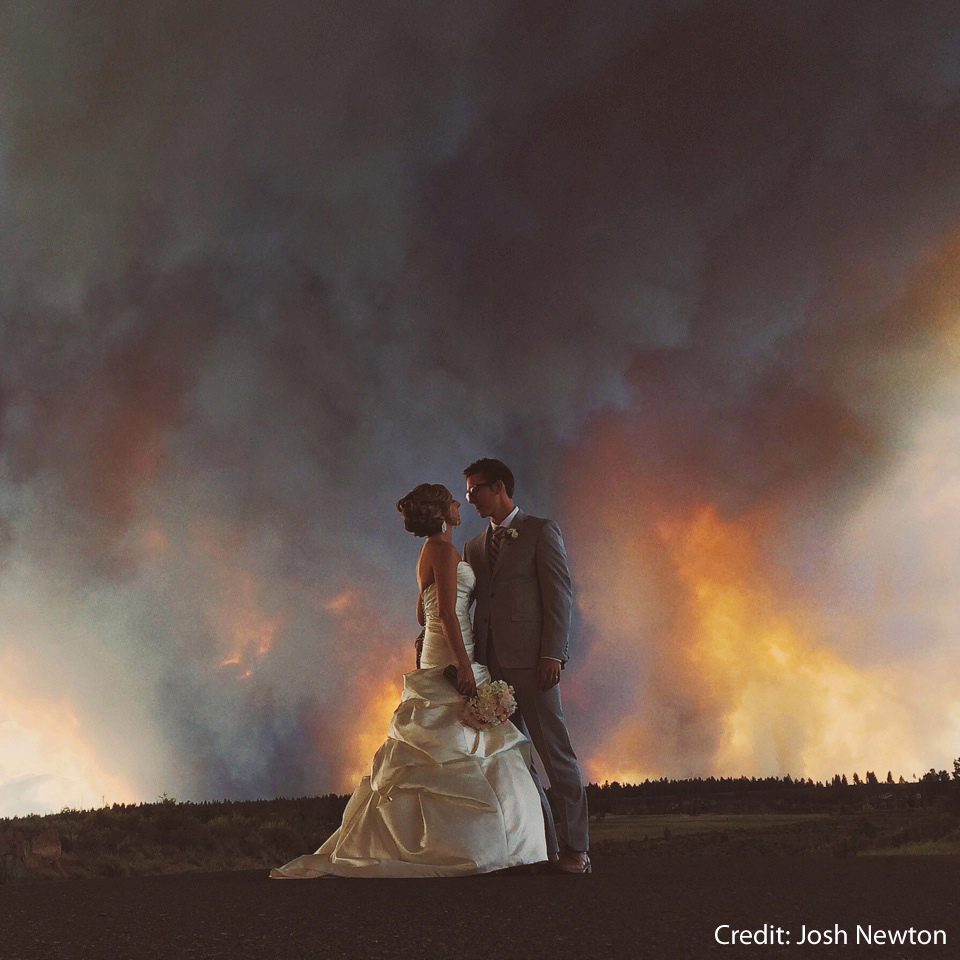 BEND, OR (KPTV) — An Oregon couple nearly had to put their wedding on hold when a Bend wildfire interrupted their ceremony.

The bride, April Wolber, said the Rock Springs Ranch just outside of Bend “just felt like the dream location.”

“It’s just kind of become our place,” she said.

April Wolber and her husband Michael were getting ready for the biggest day of their lives.

But as the ceremony start time neared, the Two Bulls wildfire was growing nearby.

“All of my bridesmaids did a really good job keeping me calm and didn’t even tell me about the fire until about 30 minutes before the wedding,” April Wolber said.

The bridesmaids and groomsmen were in place, and Michael Wolber was waiting for his bride, but she wasn’t walking down the aisle.

“That’s when the fire truck comes up with the sirens going,” April Wolber said.

“I’d call it an all-time low. It was announced that were going to be evacuated,” Michael Wolber said.

The fire was too close and the wedding was canceled.

The couple’s parents pleaded to firefighters to let them do a quick ceremony.

It looked hopeless, but then firefighters changed their mind.

“We got to hear the ranch manager Kelly come down, waving her arms saying, ‘We can do it. We can do the ceremony!’” Michael Wolber said.

The couple performed their ceremony in half the time. After a quick kiss, it was off to the backup reception location in Bend’s Drake Park.

The couple’s photographer, Josh Newton, snapped several incredible photos, which have gone viral, getting thousands of likes and shares on Facebook and Twitter.

Many people have said the photos remind them of Gone With the Wind.

“The fire changed the plans of our day and completely changed the course of what we thought our wedding was going to look like,” Michael Wolber said. “It was really neat to see us, and him especially, be able to turn it into a positive.”

It was a wedding better than a movie script and a story to tell for the rest of the lives.

“We wouldn’t change a single thing about the way yesterday went off,” Michael Wolber said.