WASHINGTON (CNN) – In the predawn hours of July 13, 2008, a wounded Sgt. Ryan J. Pitts dragged himself from one position to another, lobbed grenades overhead and fired a machine gun at insurgents in Afghanistan’s Kunar province.

He launched grenade after grenade under a hail of enemy gunfire as comrades at other nearby posts fell. He also asked other soldiers to fire at his position to prevent the enemy from gaining ground, according to the Army’s account of events.

By the time four fellow soldiers reached his position, Pitts was bleeding profusely yet firing furiously as he struggled to defend his post.

“It just seemed like the only option,” he told CNN. “Stay and fight. For whatever reason.”

Nine soldiers, including Sgt. Israel Garcia, who had rushed to Pitts’ aid, died in the battle. Twenty-seven others were injured.

The chaotic Battle of Wanat was later the subject of a military investigation, and Pitts’ actions earned him the Medal of Honor at a White House ceremony Monday.

Pitts has since retired from the military and lives in Nashua, New Hampshire, where he works for the computer software industry and is the father of a 1-year-old son. He is the ninth person to receive the Medal of Honor for actions during wars in Afghanistan or Iraq, according to a White House statement. The Medal of Honor is the nation’s highest award for valor in combat.

For Pitts, who has “always wanted to serve” since age 17, the award also recognizes the efforts of his fallen comrades.

“They were incredible soldiers. I mean they were warriors that day,” Pitts said. “But they were also great people.”

He remembers how Cpls. Gunnar W. Zwilling, Matthew B. Phillips and Pruitt A. Rainey all “loved to play poker.”

“They were all pretty good at it. Rainey was probably the best. He had won quite a bit of money playing poker in Afghanistan.”

Cpl. Jason M. Bogar “was very introspective and reflective on our time there. Probably more so than the rest of us,” he recalled. Spc. Sergio S. Abad was deployed before he could wed so “he married his wife over the phone in Afghanistan.”

First Lt. Jonathan P. Brostrom was a father who loved to surf and who adored his alma mater, the University of Hawaii, he said.

Cpl. Jason Hovater “was probably the funniest guy in the platoon. Great sense of humor. He’d make fun of himself just as much as he’d make fun of anybody else. Nobody was safe,” Pitts said. 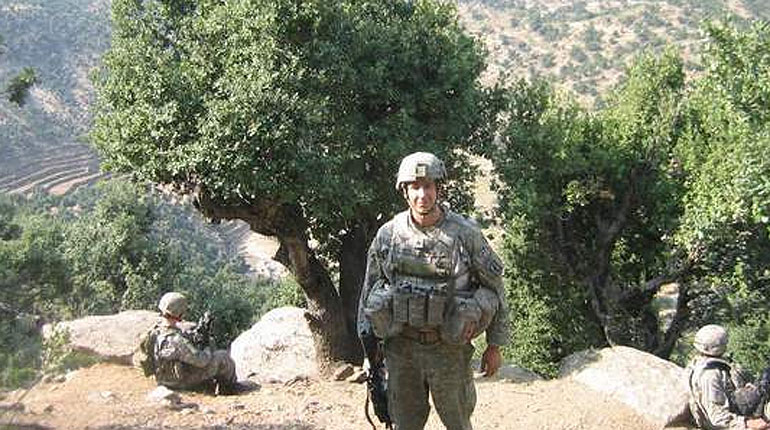 Garcia “loved his wife, his family. He was a happy guy. A very infectious smile.”

Pitts remembers holding Garcia’s hand as he died and promising him that he would tell his wife and mother that he loved them.

“There wasn’t a whole lot that I could do for him, so I just held his hand and – I couldn’t tell you much of what we talked about or even if we talked that much. I just know that he told me to tell his wife and mom that he loved them,” Pitts said.

After his deployment, Pitts kept his promise.

“I went back to Italy and his mom – Mary Cruz and his wife, Leslie, (were) there. So I was able to sit down – (Spc. Michael Denton) came with me. We were both able to sit down and told them.”

Pitts said he wouldn’t do anything differently because a brotherhood was forged through battle.

“The term brother is the best to describe our relationship – but it almost … seems to fall short of, you know, how we feel about each other and the people I’ve met,” he said clearing his throat. “The impact they had on my life — personally and professionally, the experiences that I went through with them — I wouldn’t trade anything for it.”

The Medal of Honor is awarded to members of the Armed Forces who distinguish themselves conspicuously by gallantry above and beyond the call of duty while:

The meritorious conduct must involve great personal bravery or self-sacrifice so conspicuous as to clearly distinguish the individual above his or her comrades and must have involved risk of life. There must be incontestable proof of the performance of the meritorious conduct, and each recommendation for the award must be considered on the standard of extraordinary merit.