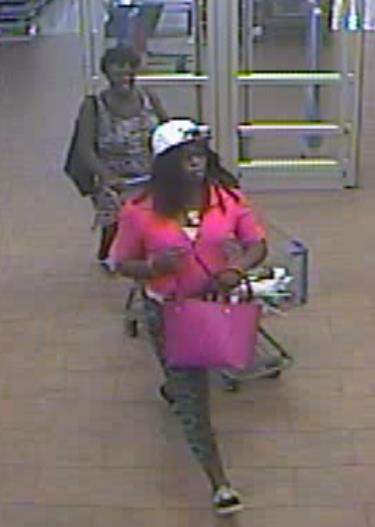 Virginia Beach Police are looking to identify two suspects wanted for an attempted malicious assault at the Walmart at 2021 Lynnhaven Parkway.

Police say on Thursday, July 3rd at approximately 2:00 a.m., the two suspects entered the Walmart and were seen placing several items in their cart before attempting to leave without paying.

As the suspects reached the exterior, one of the suspects turned to the employee who was following, pulled a knife from a bag, and swung at an employee.

The employee was not injured.

The two suspects then fled in an unknown direction.

Suspect number one is described as black, unknown sex, approximately 6’ 1”, 220 pounds with red hair extensions, wearing an orange jacket, multi-colored pants and a white and red ball cap with “Virginia Beach” written on it.

Suspect number two is described as a black female, 25-29 years of age, approximately 5’ 9”, 200 pounds, wearing a floral dress and a hair band.

Anyone with information about this crime is encouraged to call the Virginia Beach Crime Solvers Office at 1-888-LOCK-U-UP.