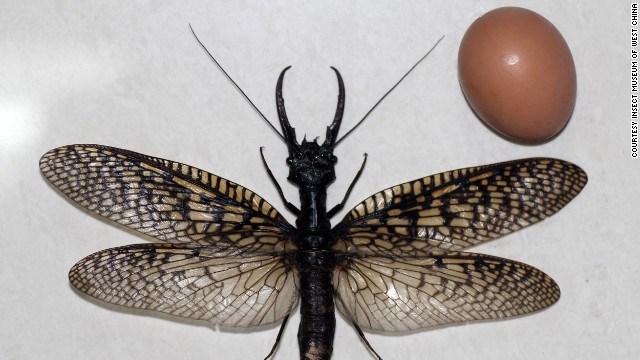 According to the Insect Museum of West China, local villagers in the outskirts of Chengdu handed over “weird insects that resemble giant dragonflies with long teeth” earlier this month.

Several of these odd critters were examined by the museum and found to be unusually large specimens of the giant dobsonfly, which is native to China and Vietnam.

The largest one measured 21 centimeters (8.27 inches) when its wings were open, according to the museum, busting the original record for largest aquatic insect held by a South American helicopter damselfly, which had a wingspan of 19.1 centimeters (7.5 inches).

Large enough to cover the face of a human adult, this scary-looking insect is also known among entomologists as an indicator of water quality, says the museum.

The giant dobsonfly makes its home in bodies of clean water and is highly sensitive to any changes in the water’s pH as well as the presence of trace elements of pollutants. If the water is slightly contaminated, the giant dobsonfly will move on to seek cleaner waters.

The insect can be found in other provinces in China, India’s Assam state, and in northern Vietnam. This is the first time it has appeared in Sichuan province.