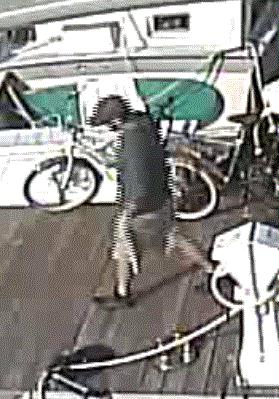 Virginia Beach, Va. – Beach police are now investigating after someone reported that their paddleboard was stolen in Shadowlawn.

On Friday, September 19, 2014, an officer responded to the 500 block of Winston Salem Avenue for a report of a larceny of a paddleboard which happened sometime between 9 a.m. and 9:15 a.m. that morning.

Video from a home security system shows the suspect taking the paddleboard, police say. The suspect was seen leaving the area on a green bicycle.

The paddleboard is described as a blue 10’ 6” Mike Dolsey with white edges. The suspect is described as a white male, 25-35 years of age, with possible facial hair, wearing a green or gray hooded sweatshirt, khaki shorts, dark sneakers, and a ball cap.

Tipsters remain anonymous and could be eligible for up to a $1,000 reward if their information leads to an arrest.