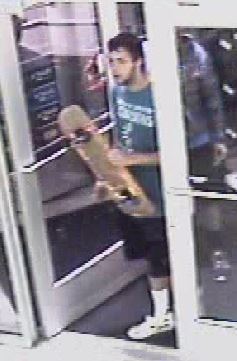 Update: Police say they have now identified the men allegedly stole a dog from the parking lot of a Wawa. The dog was returned to the owner. No one has been charged in this case yet.

Newport News, Va. – Newport News Police are investigating after a woman says her dog was stolen from her car while she was inside a Wawa convenience store.

Police say the 23-year-old woman contacted police on Monday and said that while she was inside the store between 12:20 a.m. and 12:30 a.m., two men removed her 4-month-old black and white Husky from her unlocked car.

The store’s security cameras captured images of the suspects. They are described as two white men, about 18-25 years old, with dark hair.

One of the men was unshaven and wearing a gray t-shirt with black shorts, white socks and white tennis shoes. He was carrying a brown skateboard.

The other man was wearing a gray long-sleeved hooded sweatshirt with black socks and black shoes.

Anyone with information is asked to call Newport News Crime Line at 1-888-LOCK-U-UP.