The death comes on the heels of the Michael Brown shooting two months ago in the St. Louis suburb of Ferguson, and just ahead of “A Weekend of Resistance” in St. Louis where activists will push for movement in the investigation into that case.

Like Brown, the teen who was killed in Wednesday’s shooting was black. The officer in both incidents are white, police said.

The difference: Brown was unarmed. In Wednesday’s incident, the teen had a gun, said St. Louis police Chief Sam Dotson.

Tensions are already high in the community and it’s uncertain how the latest shooting will impact its mood.

“At the scene of yet another young man’s death,” tweeted St. Louis Alderman Antonio French. “This happens too often in our city. It’s a crisis that we should all be concerned about.”

The confrontations with police were intense and profanity laced

“That was somebody’s baby,” screamed one man, referring to the man who was killed.

“Think about your own child,” pleaded another person in the crowd.

Despite the tensions, Dotson said no businesses were looted and no windows were smashed.

He praised officers for showing a “tremendous amount of restraint” as members of the crowd confronted them face-to-face and damaged police cruisers. 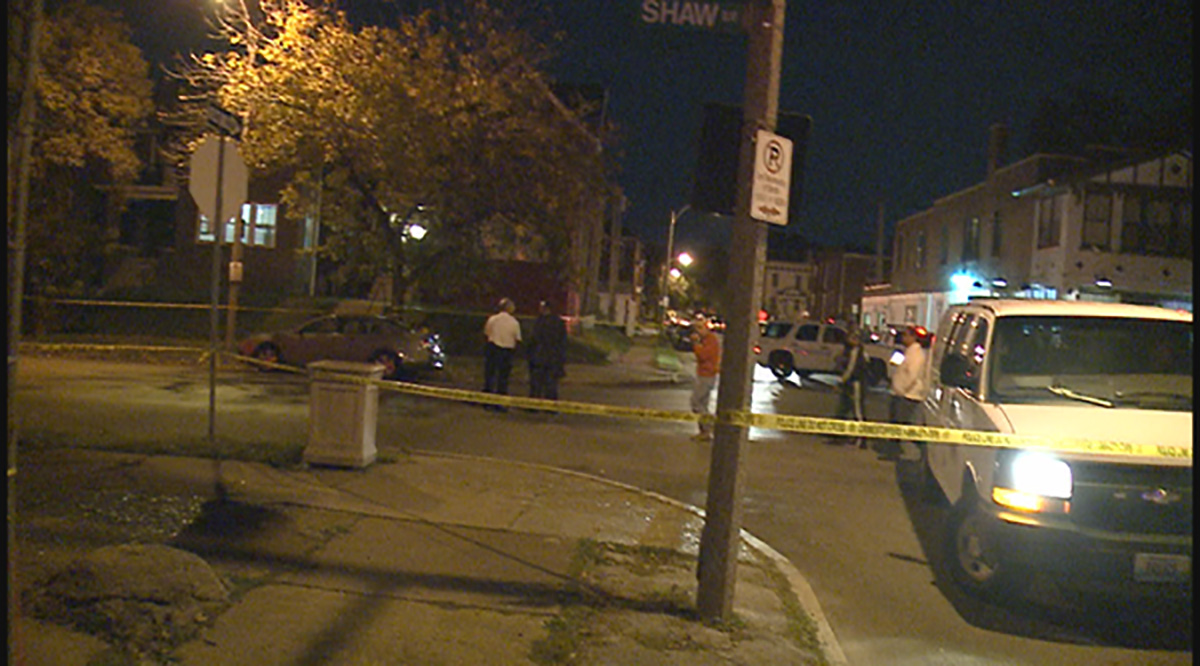 Started with a pedestrian check

The officer, a six-year veteran of the force, was working a second job for a security company, one that was approved by his department. He had on his police uniform.

The suspect was one of three African-American males,

While on patrol, the officer observed three black males who ran away as he approached.

He gave chase, because one of theem was holding up his pants in a way that made the officer believe the teen may be carrying a gun, Dotson said.

The two tussled. The teen started to run off but then turned around and fired at least three shots at the officer, Dotson said.

Police recovered a 9mm handgun. And Dotson said the teen was “no stranger to law enforcement.” He didn’t however into details, citing privacy concerns.

The two other suspects have not been apprehended.

In August, Brown, an African-American, was shot to death by a white police officer in Ferguson. The death of the unarmed 18-year-old fueled protests and sparked a nationwide debate on police use of force.

Protesters are planing a series of demonstrations, rallies and events in Ferguson and St. Louis this weekend to call for an end to racial profiling and what they call police violence.

This weekend’s protests start with a rally and outside the office of the prosecutor investigating the Brown shooting.

Demonstrators will call for Bob McCulloch to step aside and allow a special prosecutor to be appointed.

Additional marches and demonstrations will mark the weekend, along with “civil disobedience actions around the St. Louis region,” according to a statement from organizers that also says thousands of people from across the country are expected.