North Carolina Governor Pat McCrory spoke in Elizabeth City on Friday about his 25-year transportation vision, the economy, and the importance of the Coast Guard in the region.

Both the governor and the Department of Transportation Secretary Tony Tata spoke about the need to better connect northeast North Carolina with the Hampton Roads and Norfolk areas of Virginia during a stop at the Elizabeth City Regional Airport.

“One of the great potentials for this area is not only to connect inward to North Carolina but also connect with Virginia,” Gov. McCrory said.

It’s a plan many are calling the Highway to Hampton Roads.

“It will connect Hampton Roads to Raleigh via route 17 and US 64 out of Williamston into Raleigh, and we will connect to Interstate 64 in the Chesapeake area,” said North Carolina’s Secretary of Transportation, Anthony Tata.  “Having grown up in Virginia Beach, I have travelled through here many times and it is in great need of a controlled access road so that people can get to and from work, to and from recreational areas, to universities to health care centers, and that is the real essence of the Governor’s vision.”

Right now, the bill for the future interstate is being discussed by legislators both in the House and Senate in Washington D.C.

Tata says it could take at least 9 months before North Carolina will get the future interstate designation. If and when that does happen, he says that could open the door to federal funding and help set a plan to bring the interstate to life.

After the unveiling, Governor McCrory then met with business and community leaders in downtown Elizabeth City before concluding his visit with a tour of the Coast Guard Air Station Elizabeth City. 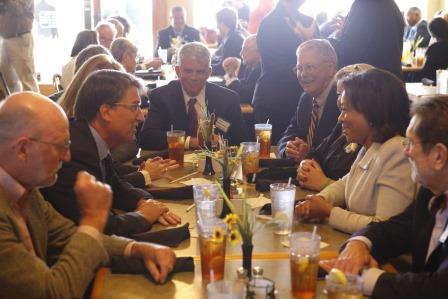