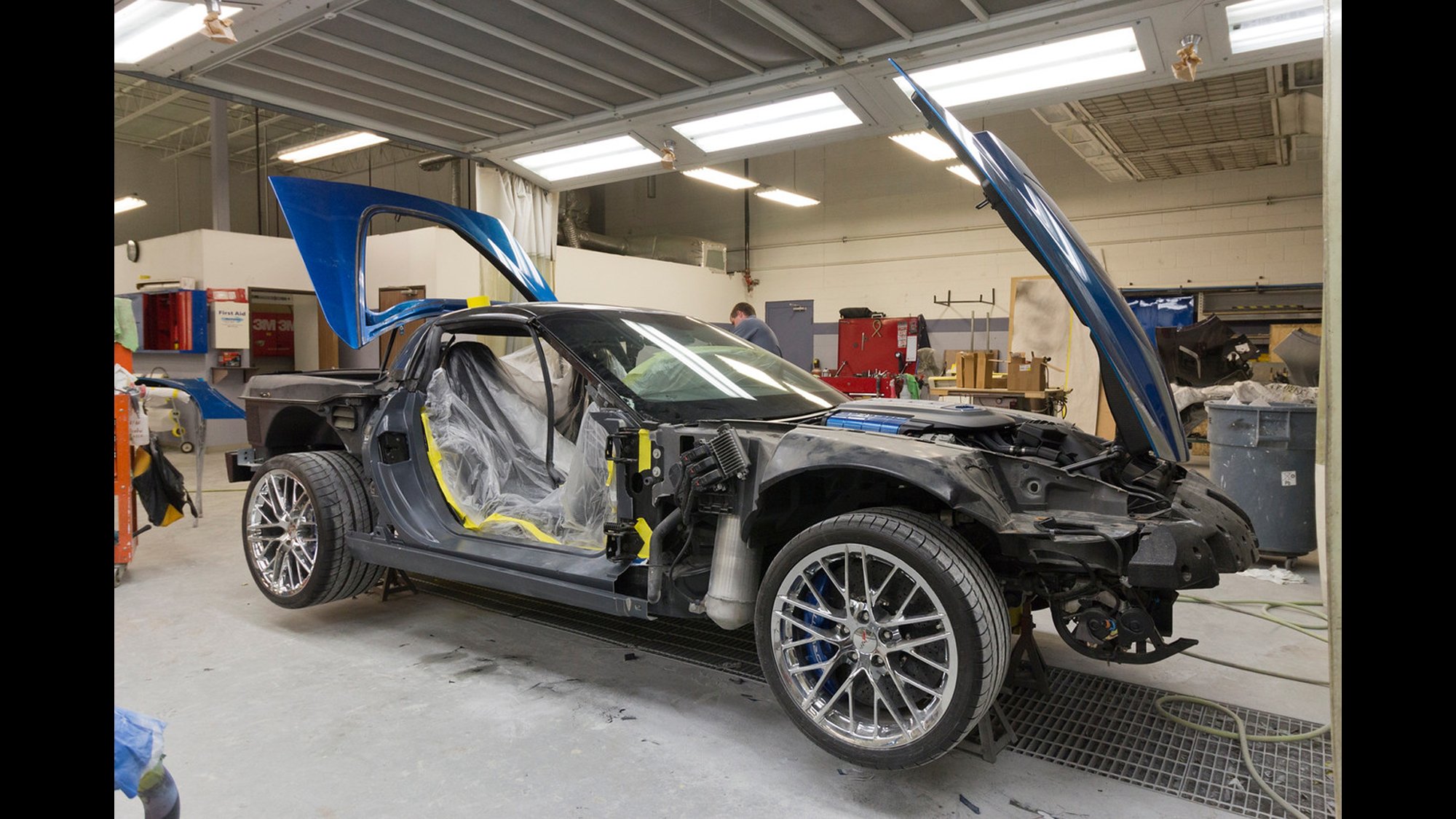 (CNN) — A special team of hotshot Corvette restorers has dealt a blow against an evil sinkhole that desecrated the National Corvette Museum in Bowling Green, Kentucky.

This week General Motors and Chevrolet unveiled the 2009 ZR1 Blue Devil — the first of three damaged cars that will be restored from a disaster that stunned Corvette fans around the world.

Remember? Back in February, a freakish sinkhole appeared inside the museum, swallowing eight beautiful machines with an estimated value reported at about $2 million. When the cars were hauled out of the hole, only three were deemed unscathed enough for restoration.

Hey, this is a big deal. Experts call the Corvette the most collected car in America. GM says it’s the “world’s longest-running, continuously produced passenger car.”

The Blue Devil is no ordinary Corvette. Even though it’s only 5 years old, it’s been dubbed a “supercar” and “legendary” with a top speed of more than 200 mph.

The sleek demon went on display for the first time on Monday during a ceremony at the big Specialty Equipment Marketing Association show in Las Vegas.

It’s not often car restorers get a chance to rescue a vehicle this special. This job was handled by a 10-member team with a less-than-sexy handle: GLS — Global Logistics Services.

“We need to come up with a better name — like the Corvette Restoration SWAT Team!” laughed GM spokesman Monte Doran.

It may feel like a big win for the Corvette Nation against the forces of nature — but now may be a bit too soon to crow about it.

“That car really had very little damage done to it, compared to all the other cars in the sinkhole. It was a relatively easy restoration,” Doran said.

That news will please CNN commenters who joked that the damage to the cars could be “buffed out” — as easily as paint scratches.

The biggest challenge, he said, will be the 1 Millionth Corvette, he acknowledged, the 1992 convertible which was the millionth ‘Vette to come off the assembly line.

But what about that hole? This coming Monday, work is set to begin to fill the 30-foot-deep sinkhole which ruined the museum’s bright yellow, red-spired Skydome. Estimated cost of the eight-month project: $3.2 million.

“They’ll be bringing in equipment and moving cars out of the room, before they start work on the sinkhole,” said museum spokeswoman Katie Frassinelli.

The museum had initially considered leaving the hole unfilled as a permanent display — perhaps because the disaster has been good for business.

In the months since the earth opened up and snatched these precious cars from our midst, visitors to the museum have increased by 65% over the same period last year, she said. Folks have been able to see the hole safely through a glass window.

Also on display, are five cars that were pulled from the hole — but were too wrecked to be restored:

But visitors said they wanted more.

So the museum has started selling jars full of dirt from the sinkhole for $10 a pop. “They asked for it,” Frassinelli said. “The dirt has little bits of fiberglass in it from the cars.”

The road ahead for the remaining two salvageable cars is a bumpy one.

A 1962 beauty dubbed the “Black Corvette” is just too old for GM to handle. The company says it no longer has the institutional knowledge required to properly put it back in shape.

That job is expected to be done by a hand-picked restoration specialist team, Frassinelli said. “We haven’t identified who’s fixing it yet.”

GM has accepted the challenge of restoring the worst-damaged of the salvageable cars: the 1 Millionth Corvette.

It “has much, much more damage than the Blue Devil,” Doran said. It’s “going to be a much harder, much longer process. Simply because the car is older so it’s hard to get replacement parts. We don’t have all the expertise in house that we do with current Corvettes like the Blue Devil.”

One of the biggest decisions is how many of the parts on the car should be replaced. “One of the guys in design calls it a ‘respectful restoration,’ ” Doran said. “You want to keep as much of the original components as you possibly can to preserve the history of the car.”

Restoration on the 1 Millionth Corvette is set to begin in January, Doran said, and the job is expected to take about six months. Total cost to Chevrolet for the two cars: $250,000.

Meanwhile, the Blue Devil will be back home soon. Packed with loving care in a special enclosed truck by special handlers, Doran said it is expected to head to the museum around Saturday.

When it gets there, workers will roll it back into the holy church of the Corvette Nation, where for generations to come, visitors will talk about how it survived the Great Corvette Sinkhole of 2014.