"Right now all hell is breaking loose," he said. He has decided to "shelter in place" this evening.

Protests have started across the country, including in New York, Chicago and in front of the White House in Washington, following a grand jury's decision not to indict Ferguson police Officer Darren Wilson.

A few protesters hurled items at CNN's Stephanie Elam, and some said they did not want the media reporting on the unrest in Ferguson.

"Even at this mature stage of the investigation, we have avoided prejudging any of the evidence," Holder said. " And although federal civil rights law imposes a high legal bar in these types of cases, we have resisted forming premature conclusions."

The violence that has broken out in Ferguson following the grand jury's decision to not indict Officer Darren Wilson is not what the Brown family wanted, family attorney Benjamin Crump told CNN. "They wish that people will not be violent" but be peaceful and constructive, he said.

Ferguson Market & Liquor -- the same store where Michael Brown had allegedly stolen cigars before his confrontation with Officer Darren Wilson in August -- was being looted Monday night, CNN crews reported.

A grand jury decided not to indict Ferguson police Officer Darren Wilson in the shooting death of Michael Brown, setting off fresh confrontations between protesters and police in the tense Missouri city Monday night.

Several gunshots were heard, CNN teams on the ground said.

Some protesters rushed the officers lined up in front of the Ferguson police department. Some in the crowd told the agitators to stop throwing bottles, but their urgings fells on deaf air.

Police responded by lobbing tear gas, even though they said they were smoke pellets.

One protester named Angel told CNN that a woman in the crowd had a heart attack, and as several people tried to carry the woman away, they were tear gassed.

In the distance, a police cruiser was on fire.

Fearing just such a reaction, Brown's father had urged demonstrators earlier to remain calm no matter what the grand jury decided.

"Hurting others or destroying property is not the answer," Michael Brown Sr. said. "No matter what the grand jury decides, I do not want my son's death to be in vain. I want it to lead to incredible change, positive change. Change that makes the St. Louis region better for everyone."

Brown Sr.'s words were echoed by President Barack Obama who too called for calm.

It is an "understandable reaction" that some Americans will agree and others will be made angry by the decision to not indict Wilson, Obama said Monday night.

"First and foremost, we are a nation built on the rule of law, so we need to accept this decision was the grand jury's to make," he said.

After an "exhaustive review," the jurors deliberated for two days, he said. The grand jurors are "the only ones who have heard all the evidence," St. Louis County Prosecuting Attorney Robert McCulloch told reporters.

"The physical and scientific evidence examined by the grand jury, combined with the witness statements, supported and substantiated by that physical evidence, tells the accurate and tragic story of what happened," he said.

Brown's father is "devastated" that Wilson will not face charges, a spokeswoman for Michael Brown Sr. told CNN's Evan Perez.

"While we understand that many others share our pain, we ask that you channel your frustration in ways that will make a positive change," the family said in a statement. "We need to work together to fix the system that allowed this to happen." The family made a call for police officers across the country to wear body cameras.

Through a statement issued by his attorneys, Officer Wilson expressed thanks to those who have "stood by his side" since the August 9 shooting of Michael Brown. "Law enforcement personnel must frequently make split-second and difficult decisions," the statement said. "Officer Wilson followed his training and followed the law."

'No justice, no peace'

As soon as the crowd learned there would not be an indictment, hundreds of people gathered outside the Ferguson police station in anger and dismay.

Some people broke down in tears. Others threw their hands up and screamed. A chant arose, " F*ck the police! "

The crowd surged toward the metal gates in front of the station and were met by officers in full riot gear. Another chant arose: "No justice, no peace!"

Some protesters destroyed a police car, and one demonstrator was seen dousing another patrol car with lighter fluid before police in riot gear moved in, CNN correspondent Jason Carroll said.

'Not the time to turn on each other'

"No matter what is announced, people will be emotional. I want people to think with their heads and not with emotion," said St. Louis County Executive Charlie Dooley. "This is not the time to turn on each other. It is a time to turn to each other."

As he spoke, protesters outside the police department chanted: "Indict that cop!" A line of police guarded the entrance.

Members of the National Guard were in the area to provide security at firehouses, police stations and utility substations, the governor said.

Brown's death ignited a national debate on race and law enforcement. Nowhere was the tension more evident than in the predominantly black town of Ferguson, which has a mostly white police department and town government.

Supporters of Brown's family back witness accounts that Wilson fired while Brown, 18, had his hands up in surrender. Wilson's supporters say that Brown was the aggressor and had tried to take Wilson's gun while he was in his vehicle and that the officer fired in self-defense.

The town couldn't even agree what happened during weeks of street demonstrations. Protesters argued that authorities were trying to stifle protests; officials said they were acting to keep violence under control.

Brown's family has asked for four and a half minutes of silence before any protests begin, family representative Janie Jones said.

"We are not here to be violent. We are here in memory of our son. We are here for protection of all children. We are here to support justice and equality for all people. We lift our voices to ensure black and brown men, women and children can live in this country without being devalued because of the color of our skin," the family said in an statement earlier Monday.

The time period is a reference to the approximately four and a half hours Brown's body remained in the street after he was shot.

An investigation by the St. Louis Post-Dispatch found that county detectives were 30 miles away when they were called, and the first detective arrived about 90 minutes after the shooting. When a hearse later arrived, an angry crowd had gathered and it was too dangerous to get the body, authorities said. Ultimately, a SWAT team came.

"The world will be watching us. They're going to watch how we handle our disagreements in the coming days and how we make needed change in the coming months and years," St. Louis Mayor Francis Slay told reporters before the grand jury announcement.

'We're just ready for it to be over with'

The city has been on edge in anticipation of a decision. Law enforcement sources said the grand jury was sent home.

More businesses boarded up, but streets were quiet in the afternoon as residents waited.

Byron Conley, protesting outside city police department, told CNN, "We're just ready for it to be over with. Let's get on with our lives."

Rick Canamore stood with his sign -- "RIP Mike Brown" -- outside the police department.

Though the basic facts of the case -- that Brown was unarmed when Wilson shot him -- are not in question, the facts of the fatal moment are hotly disputed. Authorities have said Wilson stopped Brown because Brown and a friend were blocking traffic, by walking down the middle of the street.

Protests in Ferguson might be hampered by winter weather, with temperatures expected to drop into the upper 20s Monday night.

The Ferguson-Florissant School District has canceled classes and activities for Tuesday as a result of the expected grand jury announcement. The district's calendar shows the schools will be closed from Wednesday through Friday for Thanksgiving. The nearby Riverview Gardens School District similarly canceled school for Tuesday.

Unrest could flare in other cities, too, in the wake of the grand jury decision, Rashid Abdul-Salaam, a security specialist and former police officer, told CNN.

"Departments would be remiss if they didn't prepare," he said.

Unlike a jury in a criminal case, which convicts someone if jurors are convinced of guilt "beyond a reasonable doubt," a grand jury decides whether there is "probable cause" to charge someone with a crime, based on testimony and evidence presented.

In Missouri, grand jurors don't have to be unanimous to indict, as long as nine of the 12 agree on a charge.

It also could have added a charge of armed criminal action, authorities said.

The grand jury meets in secrecy and first met in August. While the jury members are not identified, authorities have released some information about them.

The county grand jury was randomly selected from an approved pool and has been seated since May, according to Paul Fox, director of judicial administration for the St. Louis County Circuit Court.

Many grand juries hear numerous cases. These juries last for a specified period of time rather than the duration of a specific case.

Wilson himself testified before the grand jury, CNN legal analyst Jeffrey Toobin said, an unusual move because he gave up his Fifth Amendment rights in doing so.

Ferguson an exception as ’93% of blacks are killed by other blacks,’ Giuliani says 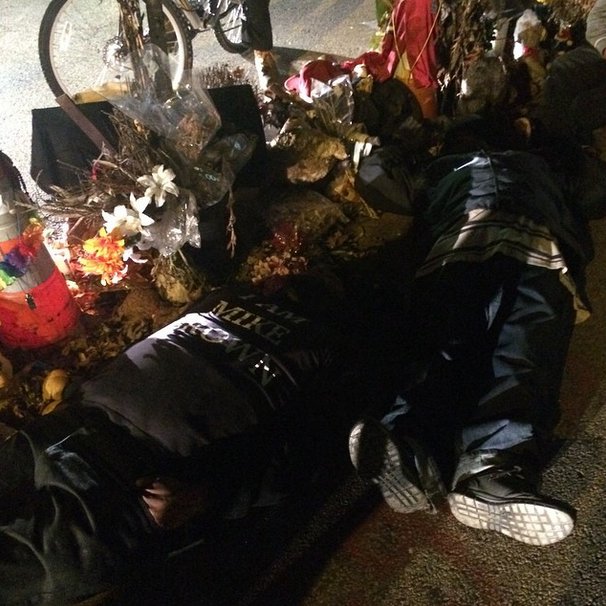