One suspect was captured at the scene. Investigators are still actively searching for a third suspect.

Police have identified the first man arrested at the scene on Friday as Rory Duke Diggs, 43, of the 4500 block of Genoa Circle in Virginia Beach. He has been charged with three counts of Robbery, three counts of Use of a Firearm and Attempt to Commit a Capital Offense.

John Anthony Lewis, 41, if the 5200 block of Rosewood Arch in Virginia Beach, was arrested around 3:00 a.m. Saturday morning. He has been charged with three counts of Robbery and three counts of Use of a Firearm.

The search for the suspects started when the Wells Fargo bank in the 2100 block of General Booth Blvd. was robbed Friday morning around 10:00 a.m., according to police. After the robbery, the suspects fled the scene in a Chevrolet Blazer.

During the pursuit, a Virginia State Police trooper was grazed in the head by a bullet when the suspects started shooting from the Blazer. The trooper's injury was minor and he was transported to Virginia Beach General Hospital where he has been treated and released, according to a VSP spokesperson.

The FBI says this incident is believed to be connected to a series of armed bank robberies which occurred in Chesapeake and Virginia Beach since 2011.

A combined reward of up to $25,000 is being offered by the FBI and the financial industry for information leading directly to the arrest and conviction of the individuals responsible for these robberies.

Anyone with information should call the Norfolk FBI Office at (757) 455-0100. Members of the public should consider the subjects armed and extremely dangerous, and should not attempt to approach or apprehend them.

The suspects who have been arrested are being held at the Virginia Beach Correctional Center without bond.

Mugshots are not being released at this time due to the ongoing investigation.

During portions of the search, a large portion of the Strawbridge area was blocked off.  Strawbridge Elementary and Three Oaks Elementary, the Virginia Beach Rec Center, as well as two local neighborhoods went on lockdown. Dismissal times were adjusted for the schools and the neighborhood lockdowns have since been lifted.

*See the live blog below for additional information* 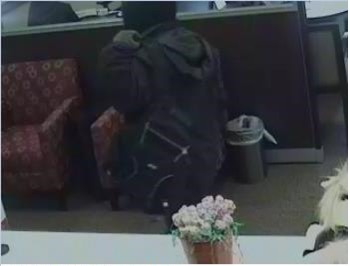