Person wanted for tampering with vehicles on Christmas Eve in Portsmouth 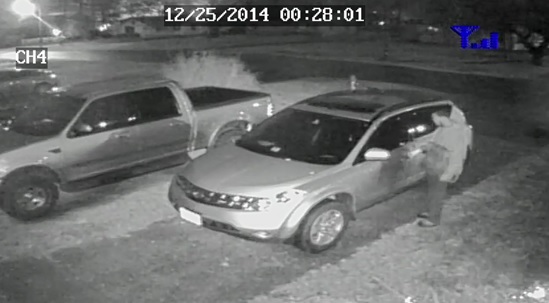 Portsmouth, Va. – Police are looking for someone wanted for tampering with vehicles in the City of Portsmouth.

The suspect was caught on surveillance video, tampering with several vehicles.

On Wednesday, December 24, 2014 at 12:28 a.m., the suspect walked into a driveway in the 100 block of Gee Street and began pulling on the door handle of a parked vehicle. The suspect entered the vehicle, began searching throughout the interior, and tampered with the ignition, police say.

The suspect then exited the vehicle after approximately seven minutes and tried to open the doors to another vehicle parked in the same driveway. When the
suspect was not able to get inside that vehicle, he walked to the home next door and began pulling on the door handles of a vehicle in that driveway. After failing
to get into that vehicle, the suspect walked way.

Anyone with information about this case or who can identify the suspect pictured is asked to call the Crime Line at 1-888-LOCK-U-UP ℠. Callers are never
asked to give their name or required to testify in court. If a caller’s tip leads to an arrest, the recovery of drugs, or stolen property, they could be
eligible for a cash reward of up to $1000.