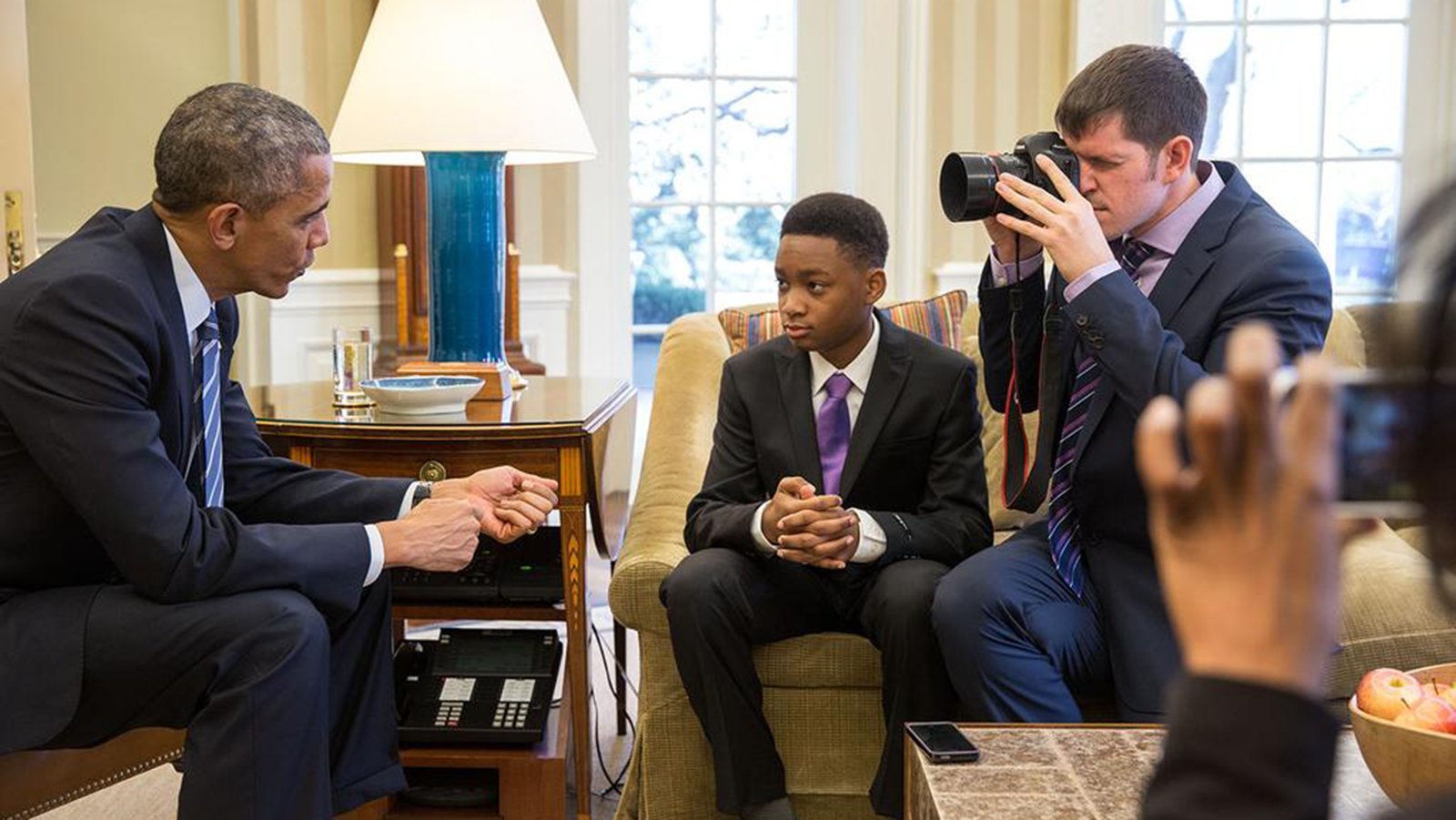 (CNN) — Middle school student Vidal Chastanet was simply stating his truth about the school principal who inspires him in his rough Brooklyn neighborhood.

Featured in the wildly popular “Humans of New York” photo series in January, a picture of Chastanet along with his sentiments went viral, and a subsequent fundraiser pulled in more than $1 million for his school.

That’s how Chastanet, 13, ended up at the White House on Thursday.

The young man; his inspirational principal, Nadia Lopez; and “Humans of New York” creator Brandon Stanton all got the chance to meet Obama. (That’s Chastanet in Obama’s seat in the Oval Office.)

“You don’t do things alone,” Obama told Chastanet, according to Stanton’s blog. “Nobody does things alone. Everybody always needs support.

“For a young man like you, you should never be too afraid or too shy to look for people who can encourage you or mentor you,” Obama said. “There are a lot of people out there who want to provide advice and support to people who are trying to do the right thing. So you’ll have a lot of people helping you. Just always remember to be open to help. Never think that you know everything. And always be ready to listen.”

It’s been a wild ride for Chastanet, Lopez and their school, Mott Hall Bridges Academy, a middle school in Brownsville, Brooklyn. It’s known as a “safe zone in a crime-plagued neighborhood.”

After Vidal’s post took off, Stanton launched a campaign in late January to benefit the school through a summer trip to Harvard. The goal of the trip was to broaden students’ horizons and expand their idea of their potential, Stanton wrote on the campaign page.

The fundraising campaign’s rapid success speaks in part to the reach of “Humans of New York,” which has a social media following of nearly 12 million on Facebook alone. It’s also a testament to the ability of social media to breathe new life into a feel-good story.

The first inspirational post featured a picture of Chastanet in a housing project in Brownsville. He describes Lopez as the most influential person in his life.

“When we get in trouble, she doesn’t suspend us. She calls us to her office and explains to us how society was built down around us. And she tells us that each time somebody fails out of school, a new jail cell gets built. And one time she made every student stand up, one at a time, and she told each one of us that we matter.”

In a posting on the “Humans of New York” Facebook page, Lopez talked about the discouragement she felt before the campaign.

“Before all of this happened for our school, I felt broken,” she said. “And I think the world felt a little broken too, because a lot of bad things have been happening lately, especially between black people and white people. But all of you gave people a reason to feel a little less broken.”

The picture of Vidal has been widely shared and drew more than 1 million likes on the “Humans of New York” Facebook page, compelling Stanton to dig deeper.

“I ask people all the time about the most influential person in their life, and he was the first person who ever told me his principal,” Stanton wrote in an email. “Then when I met Ms. Lopez, I could not have been more impressed. She is a force of nature. When she let me sit in on a staff meeting, I got a front-row seat to the challenges that her school faces, and I wanted to be involved in the solution.”

Lopez and Stanton discussed how the “Humans of New York” community could help further the school’s vision, Stanton said in a Facebook post. They decided to create a fund to provide each incoming sixth-grade class a chance to get out of their neighborhood and visit Harvard University.

“This is a neighborhood that doesn’t necessarily expect much from our children, so at Mott Hall Bridges Academy we set our expectations very high. We don’t call the children ‘students,’ we call them ‘scholars.’ Our color is purple. Our scholars wear purple, and so do our staff,” Lopez told Stanton, who featured her picture on “Humans of New York.”

“Because purple is the color of royalty. I want my scholars to know that even if they live in a housing project, they are part of a royal lineage going back to great African kings and queens. They belong to a group of individuals who invented astronomy and math. And they belong to a group of individuals who have endured so much history and still overcome. When you tell people you’re from Brownsville, their face cringes up. But there are children here that need to know that they are expected to succeed.”

The campaign’s scope has expanded as its pot has grown. Initially, it was intended to cover lodging and transportation costs for three Mott Hall classes to make the trip to the Cambridge, Massachusetts, campus. In an update Friday, Stanton said that funds raised beyond the initial goal would go toward summer programming for the school.

“Learning stops during the summer for my scholars. We have what is called a ‘summer slide,’ ” Lopez says on the fundraising campaign page.

“They need a safe place where they can do activities and continue to grow their minds.”

Stanton posted that because of the campaign’s success, “We are starting a scholarship fund available to the graduates of Mott Hall Bridges Academy. A committee of MHBA educators and administrators will choose the recipients each year.”

The scholarship fund will be named for Vidal, the student who started it all, who will be the fund’s first recipient, Stanton announced.