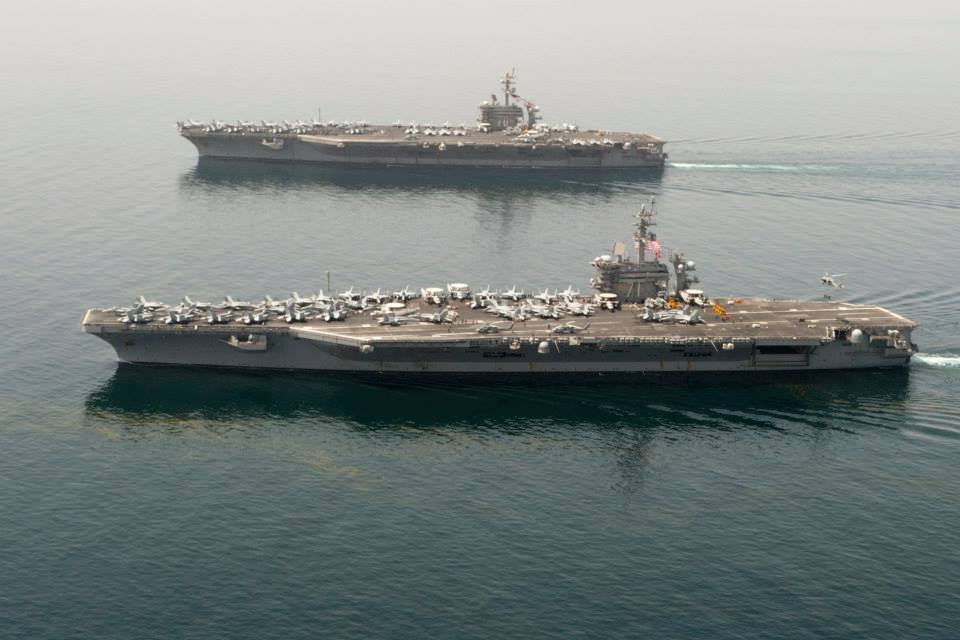 Aboard the USS Theodore Roosevelt – “Hey! There she is,” yelled Logistics Specialist 3rd Class Jonathan Cofer.

He ran over with arms wide open, embracing Logistics Specialist 3rd Class Katrine Green. The two rocked from side to side like children, latching on to their first prized stuffed animal at the neighborhood fair.

“It’s been years,” she said through her smile and tears.

Green is a Sailor aboard the Nimitz-class aircraft carrier USS Carl Vinson. She and the Carl Vinson’s crew are set to return home following an 8-month deployment after being relieved by the USS Theodore Roosevelt on April 13th.

But, before making the long voyage back to San Diego, Green and a few of her shipmates flew to the Roosevelt for breakfast and a chance to reunite with family assigned to ‘The Big Stick’.

Green lost her aunt during her deployment so she was especially grateful to see her cousin.

“I haven’t seen him in over two years,” said Green. “If it wasn’t for this opportunity, it would have been at least three years before I’d be able to see him again.”

Aviation Structural Mechanic 3rd Class Robyn Gonzales, assigned to the Stingers of Strike Fighter Squadron (VFA) 94, currently deployed on board Carl Vinson, and Aviation Electronics Technician Airman Alexander Gonzales, assigned to the Red Rippers of VFA-11, currently deployed on board Theodore Roosevelt, also reunited for a brief moment. The dual-military couple explained the challenge of being stationed at separate commands.

“Being away from my husband has been the most difficult part of the deployment,” said Gonzales, apart from her husband since August 2014 when Carl Vinson departed its homeport of San Diego on its current deployment. “I was extremely excited to have the opportunity to spend a little time with him today.”

While Fireman Jerry Rodriguez, stationed on Carl Vinson, is looking forward to the Vinson finishing up this deployment, his wife, Roosevelt crew member Seaman Nicole Torres Miriam, is transiting in the opposite direction just beginning the deployment aboard the Roosevelt.

“For several months, communication with my wife has been hit or miss,” said Rodriguez. “We haven’t been able to communicate often, so this is a huge boost to our morale.”

Although brief, these Sailors were grateful for the reunion, to have lived in the moment, and cherish the unique Navy experience of reuniting them with their spouses just outside the Straits of Hormuz.

“When I first heard about this opportunity, I wasn’t sure it was real,” Rodriguez said. “I’m still excited that we got to see each other again after all this time. I’m going to cherish this moment with her forever.”

“You don’t go out to sea and expect to see your husband until you get back home,” said Gonzales. “This is easily the best part of my deployment. I can’t wait to see him again, and I’m grateful we had this opportunity.”

The mess deck’s passageways buzzed as onlookers briskly walked past, craning their necks to see what all the commotion was about.

Senior Chief Logistics Specialist Gary Seibel helped coordinate the event and talked about why he thought it was important.

“The morale of our Sailors is essential to the mission,” said Seibel. “This was an important opportunity for these Sailors to see each other. It really helps cut the time they wouldn’t have seen each other in half.”

“I found out about the opportunity at our muster one day,” said Brilla. “I was happy that I’d get to see [my cousin] because I haven’t seen her in so long. We’ve both been in the Navy for two years but we haven’t seen each other since before boot camp.”

“We have completely different lives but we’re in the same Navy,” said Holston. “That’s what makes this opportunity so cool because we have so much to talk about and so much to catch up on. Seeing her helps make being out to sea a lot easier. We won’t be so behind the next time I see her.”

“We’re basically Navy brothers,” said Terraras. “We’re literally following the cadence: start together, finish together. We went to ‘A’ school together and here we are. When I found out TR would be relieving us, it just felt right.”

“He had it and now I’ve got it,” Fuentes quipped.

Theodore Roosevelt deployed from Norfolk and will execute a homeport shift to San Diego at the conclusion of deployment.

“It’s amazing how it worked out, we’ll both be in San Diego for a little,” said Fuentes. “We’ve been trying to get orders to the same place for a while but we haven’t had much luck.”

The Carl Vinson group visited for two hours and wrapped up their conversations with hugs and promises.

“I’m going to send you lots of letters and care packages,” said Green as she and Cofer embraced one last time. “See you on the West Coast.”