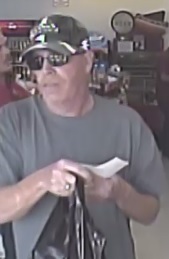 Two people forced their way into the business in the early morning hours of Sunday, April 19, 2015, according to the Gloucester County Sheriff’s Office.

The suspects were both wearing hooded sweatshirts, gloves, and bandana style mask. Both suspects appear to be white males.

The Gloucester County Sheriff’s Office is asking for the public’s help to identify the suspects involved in this crime. The two photographs of the masked suspects are surveillance photos from the business at the time of the crime, and the two photographs of the unmasked men are suspected to have used the credit card stolen from the business, officials say. The vehicle pictured is believed to be an older model Nissan Maxima, which the suspects using the credit card may have been operating.

Anyone with information is asked to contact the Gloucester County Sheriff’s Office at 804‐693‐3890.

Callers may also provide information via Crime Stoppers at 1‐888‐LOCK‐U‐UP. You may remain anonymous and may be eligible for a cash reward of up to $1,000.