State of Emergency, curfew declared in Baltimore as riots continue

BALTIMORE (CNN) — Streets in Baltimore looked like a war zone Tuesday morning after a night of riots, fires and heartbreak.

“Too many people have spent generations building up this city for it to be destroyed by thugs who — in a very senseless way — are trying to tear down what so many have fought for,” Mayor Stephanie Rawlings-Blake said.

Buildings and cars across the city were engulfed in flames. About a dozen businesses were looted or damaged. At least 15 officers were wounded, six of them seriously, the police commissioner said.

All this came just hours after the funeral for Freddie Gray, who died of a severe spinal cord injury while in police custody.

The destruction across Baltimore brought more agony to the grieving family.

“I want y’all to get justice for my son, but don’t do it like this here,” Gray’s mother Gloria Darden pleaded Monday night.

Gray’s twin sister, Fredericka, said the chaos was no way to honor her brother.

“I don’t think that’s for Freddie,” she said. “I think the violence is wrong.”

The destruction was so bad that children can’t go to school Tuesday. Baltimore City Public Schools canceled classes for the day.

Pockets of violence broke out Saturday amid protests against Gray’s death. But the spark that ignited Monday’s pandemonium likely started with high school students on social media.

The film “The Purge” is about a dystopian society in which all laws are suspended for one 24-hour period every year.

“We had gotten information yesterday that at Mondawmin Mall, we’re going to have a large ‘purge’ of high school students from across the city,” Batts said. “We had pretty close to about 250 to 300 police officers staged in or around Mondawmin Mall at the time the youth got out of school.”

But youths started throwing rocks and other objects at police, Batts said. Police in riot gear took cover behind an armored vehicle as assailants hurled stones at them.

Fifteen officers were injured, including six seriously, Batts said. He said many of the instigators appeared to be high school students.

“I think they thought it was cute to throw cinder blocks at police,” he said.

At the same time, officers were dealing with a “credible threat” that gangs were teaming up to try to kill officers.

“The Baltimore Police Department/Criminal Intelligence Unit has received credible information that members of various gangs including the Black Guerilla Family, Bloods, and Crips have entered into a partnership to ‘take out’ law enforcement officers,” police said. “This is a credible threat.”

No officers were killed, but at least two dozen people were arrested in the violence that peaked Monday night.

There were no immediate reports of injuries among the rioters.

But the melee quickly spread to other parts of the city.

An enormous fire broke out at affordable housing center for seniors. It was just months away from opening.

Pastor Donte Hickman of the Southern Baptist Church, which owns the facility, said 60 units of senior housing were lost.

The mayor said it’s not clear whether the fire was related to riots, as the cause of the fire is under investigation.

Regardless, the loss has been devastating.

“My eyes have been filled with tears,” Hickman said. “Someone didn’t understand that we exist in the community to help revitalize it.”

Maryland Gov. Larry Hogan declared a state of emergency and activated the National Guard. The mayor of Baltimore said every possible resource was being deployed to “gain control of this situation.”

Rawlings-Blake said the city will impose a mandatory curfew from 10 p.m. to 5 a.m. daily, effective for one week starting Tuesday night.

She stressed that the city already has a mandatory curfew for young people — 9 p.m. ET for children under 14, while teenagers 14-16 have to be inside by 10 p.m. ET on school nights.

Up to 5,000 law enforcement officials will be requested from the mid-Atlantic region to help quell the violence in Baltimore, Col. William Pallozzi of the Maryland State Police said Monday night.

And authorities say about 1,500 members of the National Guard have been deployed.

“Today’s looting and acts of violence in Baltimore will not be tolerated,” Hogan said. “There is a significant difference between protesting and violence, and those committing these acts will be prosecuted under the fullest extent of the law.”

‘They don’t deserve this’

The violence erupted the same day as Gray’s funeral. The 25-year-old was arrested on April 12 and died one week later from a spinal cord injury.

“I am sure that the family is concerned, and I am positive that they are against what is beginning to develop here in town,” said Billy Murphy, an attorney for the Gray family.

“They don’t deserve this any more than Freddie Gray deserved it,” he said about the injured officers.

The mayor said the city doesn’t deserve what has happened, either.

“It is so frustrating that people think that this makes sense — to destroy our community,” she said. “People who live there that are already hurting are going to be the ones that pay.” 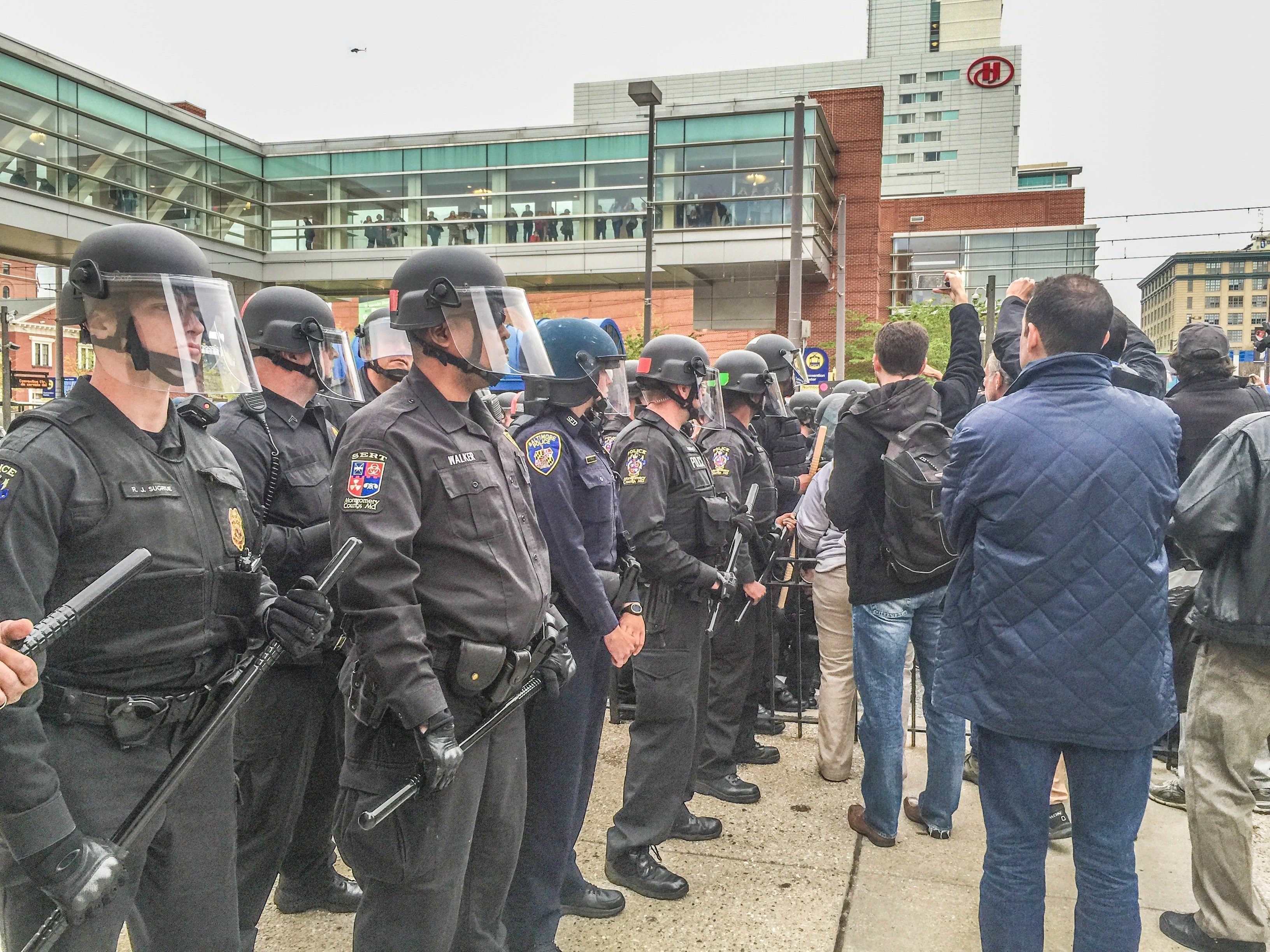