A Fire Marshal said Wednesday that the fire was ruled accidental and was caused by cigarette butts on the balcony of a first floor unit.

Crews say 16 units were affected in the fire.

Fire crews arrived at around 4 p.m. Tuesday and found heavy smoke showing from the building. They started fighting the fire on the outside of the building and then moved to fight flames inside.

Flames reached as high as 20 feet in the air and the roof of the building was destroyed.

No injuries were reported and everyone has been accounted for in the building.

Fire crews returned to the scene on Wednesday to escort residents into their units to see if they could find anything salvageable.

Just spoke with Savannah Ivey. She was able to find a necklace her husband gave her...untouched! @WTKR3 pic.twitter.com/bbUXOmoHuD

There was even a happy reunion after one firefighter found a cat alive in a unit. It was reunited with its owners who had thought it had died in the fire.

"We are providing the families with a safe place to stay and assisting them with their immediate needs," said Red Cross Executive Director, Lorri Powers. "We will continue to work with the families over the coming days to guide them as they continue the recovery process." 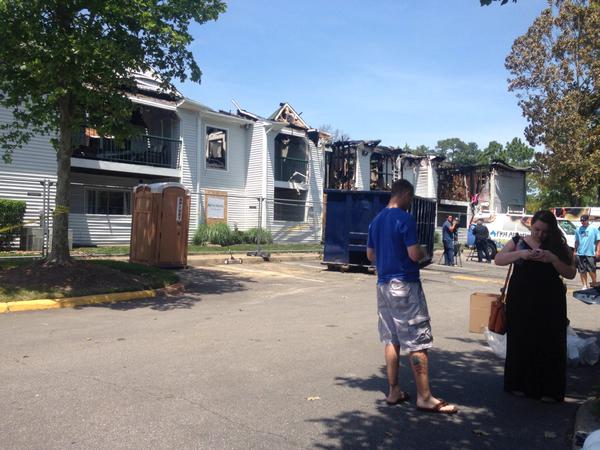