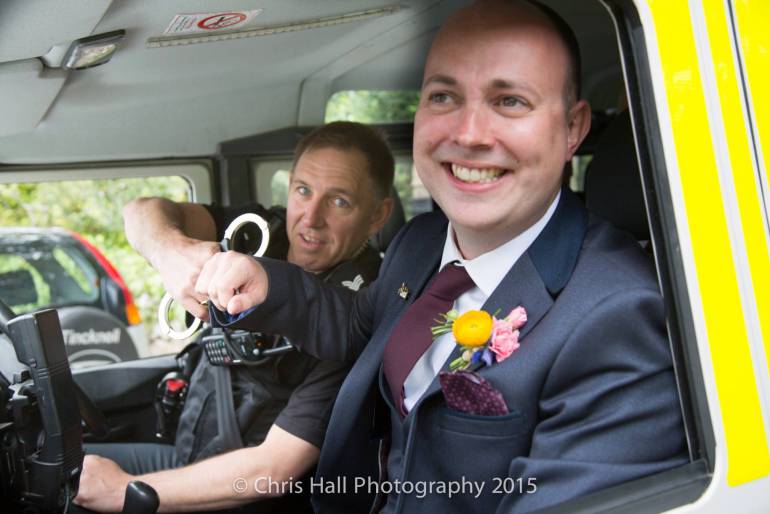 ISLES OF SCILLY — A photo of a newly married man being escorted away from his bride by police has gone viral across social media.

Alistair Robinson and his bride Sara were married on the Isles of Scilly, an archipelago off the southwestern tip of Great Britain.

Six months ago after seeing the antics of the local police department on Facebook, Alistair asked if they’d participate in his wedding.

“He didn’t actually specify why he wanted us there or what role he wanted us to have so we reverted to type and arrested him on a trumped up charge of Wasting Police Time as he left the church,” Isles of Scilly Police wrote on Facebook.

Photographer Chris Hall captured the moment where police took Alistair away in handcuffs with his bride on the side laughing.

Alistair was “released” shortly after and posed for photos with the officers.

“It will be the joy in his Bride’s, face as he was lead off in cuffs that will hurt him the most,” the police department wrote. “He got life.”

The Isles of Scilly Police are known for their clever posts including a “unique opportunity” to join the department.

According to the post from April, the candidate must have “un-flinching confidence to know what to do when you are alerted to an abandoned seal pup making its way up the main street” and resolve problems “regarding the merits of sea salt versus rock salt between a couple of drunk chefs.”