Buzz Aldrin’s travel expenses for mission to moon and back: $33.31 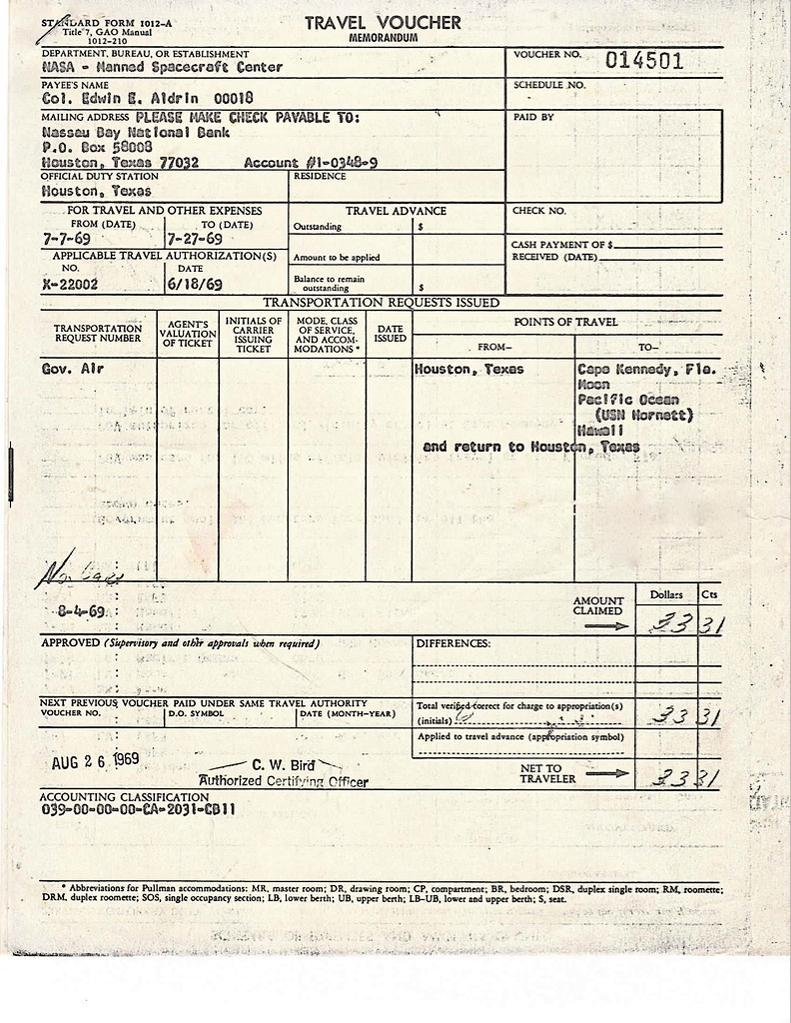 American astronaut Buzz Aldrin has been sharing some of his paperwork from the 1969 moon landing mission.

The forms, an intriguing mix of the mundane and the extraordinary, include a list of “points of travel” that’s hard to beat: Houston — Cape Kennedy — the moon — the Pacific Ocean — Hawaii — and then back to Houston.

Slightly over $30 seems like a pretty small amount to claim for such a big trip. But those expenses appear to essentially be for Aldrin’s use of a private vehicle while on the ground.

The documents, which Aldrin posted on his Twitter account recently, state that “government meals and quarters” were provided throughout the July 1969 mission. And he happily didn’t have to pay out of pocket for the rocket fuel that took Apollo 11 into space.

Taking into account inflation, $33.31 in 1969 would be worth around $217 today, according to the Bureau of Labor Statistics.

Aldrin, the second person to set foot on the moon, also showed on Twitter that even in space travel, there’s no escaping customs.

He tweeted the declaration form that he and the other Apollo crew members — Neil Armstrong and Michael Collins — had to sign upon returning from the moon.

The cargo they declared was no doubt a first: “Moon rock and moon dust samples.”

Astronauts Neil Armstrong and Buzz Aldrin place the American flag on the Moon. This image was captured by the Apollo 11 Data Acquisition Camera that was mounted to the lunar module Eagle.

The document from Honolulu Airport also says that nobody on board Apollo 11 was known to be suffering from illness “other than airsickness or the effects of accidents.”

But under the section that asks about “any other condition on board which may lead to the spread of disease,” the unsettling response was “to be determined.”

Amid concerns over what germs the astronauts might have brought back with them from the moon, they were kept in quarantine for three weeks after their return to Earth before they could be reunited with their families.

The quarantine experience “quickly became oppressive” according to a NASA history of the mission.

Aldrin has been tweeting in recent weeks about the first moon landing, whose 46th anniversary was on July 20.

He shared a photo of the “biological isolation garments” the crew members had to wear before they went into quarantine, where they had to keep themselves entertained with an exercise room, a ping pong table, television, reading material and phone calls to their families.

The suits were to ensure that “the lunar dust we brought back wouldn’t give people on earth our moon germs,” Aldrin said.

“I always found it funny that the rags used to wipe us down that were covered with moon dust were dropped in the ocean,” he tweeted. “So the poor underwater creatures got our moon germs instead.”

Aldrin then suggested that the moon dust in the ocean could be “fodder for a Godzilla movie.”

“I claim the movie rights! (A fan said call it Buzzilla!)” he joked.