NORFOLK, Virginia (CNN) — It’s 7,800 tons, 337 feet and $2 billion worth of steel and stealth, with war-fighting controls that look like a big arcade video game.

That new-boat smell may have worn off a bit during sea trials, but the man in charge was pumped with pride as the U.S. Navy’s newest submarine joined the fleet in a commissioning ceremony at Naval Station Norfolk on Saturday.

“The shiniest and coolest thing I’ve ever seen in my military career,” Cmdr. Daniel Caldwell, a 22-year Navy veteran and the first captain of the USS John Warner, told CNN. “It’s going to make whatever I do next anti-climactic.”

Remember those old war movies with a captain looking through a periscope and calling out coordinates for a torpedo attack? Well, this ain’t that sub.

For one, it doesn’t even have a periscope. Instead, the John Warner will go about its business using a photonic mast, a piece of electronic wizardry that includes high-definition and infrared video to enable the Warner, the 12th in the Virginia class of attack submarines, to see and to not been seen like nothing else under the seas.

The video information is displayed on large screens in the command center. A joystick, much like the kind you might use to play video games, controls the whole show.

In front of that is where two sailors drive the sub, like a pilot and co-pilot seated before a curved wall of video screens. Driving a sub used to take a crew of four, Caldwell said, but technology has cut that number in half. 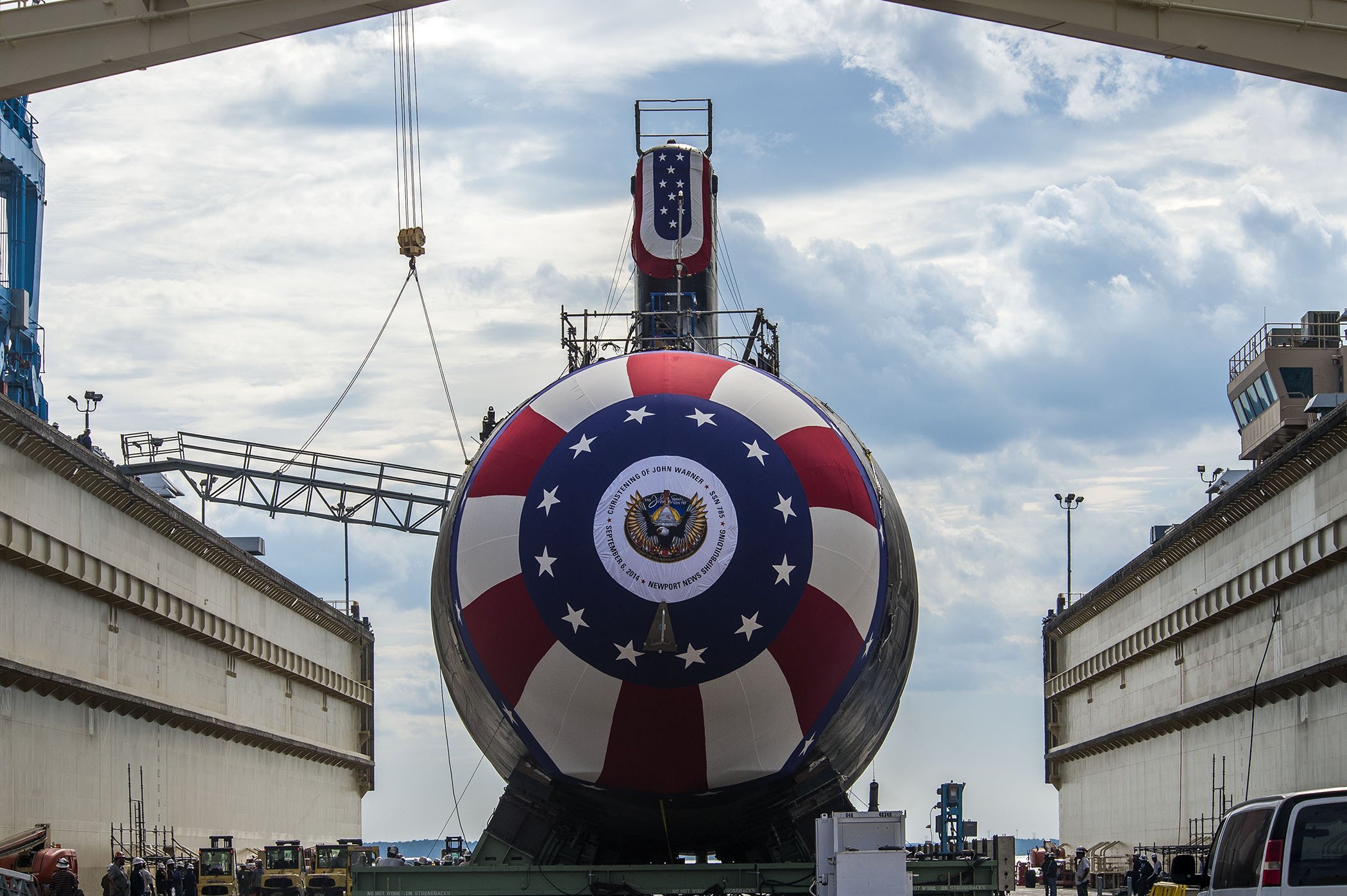 The John Warner is armed with 12 Tomahawk cruise missiles that are launched from two huge bays at the front of the boat, sort of like the chambers in a revolver, as well as MK48 torpedoes that are fired from four tubes, two on each side of the ship.

The firepower is all arranged and configured so the Warner can do other things the mission might call for, like launching UUVs — unmanned undersea vehicles, or the drones of the deep — or carrying a team of Navy SEALS and setting them on their way without breaking the surface.

“Every mission that we do, we’re just better at it than previous classes of submarines,” Caldwell said.

That confidence doesn’t mean Caldwell doesn’t have any worries over what he and the sub’s crew of about 135 may be tasked with.

“We do some pretty complicated missions in some parts of the world that are pretty unforgiving environments to operate in. You gotta make sure that the crew is ready to go do the mission you are assigned” — and be ready to change focus quickly when threats change — Caldwell said.

One thing making that easier is the high-tech nature of the vessel itself. The electronics that make the Warner a stealthy war fighter can also be programmed to make it a one-stop classroom. Simulations can be run on the system, kind of like you’d set things up on your PlayStation.

“We’ll be pushing the same buttons we’re going to push when we go out to sea,” Caldwell says.

Of course, all this comes at a price to taxpayers, about $2 billion. But that’s less than half the cost of the Seawolf class, the predecessor to the Virginia class. Only three Seawolf class vessels were built.

Forty-one subs of the Los Angeles class, which debuted in 1976, are also still in service, but they are closing in on their designed lifespan.

The Navy has won praise for keeping the Virginia class on budget while delivering two subs a year.

“The Virgina-class submarines offer compelling evidence for the feasibility of building high-tech stuff under budget and ahead of schedule,” military technology expert Dan Ward wrote in an excerpt from his book “F.I.R.E.,” reprinted online by the U.S. Naval Institute. “The Navy’s experience shows that delays and overruns are not inevitable.”

Speakers at Saturday’s commissioning pointed out that the John Warner was delivered early, under budget and with the highest readiness scores of any sub in the class.

Adm. Johnathan Greenert, the chief of naval operations, said the Virginia-class sub program is one of the Pentagon’s most successful weapons programs, especially considering what has been delivered.

The John Warner “is the most high-tech, it is the most lethal warship pound for pound that we have in our inventory,” Greenert said.

But for all its high-tech, futuristic whiz-bang hardware and software, this is a Navy that doesn’t forget where it came from. And that’s where this sub’s name comes in.

It’s the only Virginia-class sub, including the four under construction, not named after a state.

John Warner is a former sailor and Marine, a former undersecretary and secretary of the Navy and a 20-year U.S. senator from Virginia.

“When you find a guy like that, you need to find a way to honor him,” Caldwell said.

Warner, speaking to reporters on pier near the sub on Friday, hailed the boat that will bear his name.

“This ship embraces every single known bit of high-tech that is required to equip it and allow it to maintain the toughest missions,” Warner said. “It will go to all corners of this globe, all seven seas, and quietly perform a mission and disappear into the darkness of night and nobody will ever know that it was there.”

With the commissioning behind it, the John Warner will be heading out on those missions, probably within the next year.

With its own nuclear power plant and systems that make its own drinking water and air (a machine separates the oxygen from the hydrogen in water to make that happen), it could stay on patrol for decades, except for one thing.

“The only reason we have to come back is because our freezer isn’t big enough,” Caldwell said.

Well, there is one other thing.

For 135 or so hard-working sailors, there’s only one washer and one dryer. And they don’t look much bigger than your mother’s Maytags.

“So you hope that doesn’t break,” Caldwell said. That would definitely get rid of that new sub smell.