Capt. Beaver took over the duties from Capt. Robert E. Clark, who assumed command of Naval Station Norfolk in February 2014. He will retire in November after 26 years of service.

Beaver reported to Naval Station Norfolk to serve as the Executive Officer in February 2014. A native of Honolulu, Hawaii, he graduated from Virginia Tech and was commissioned through the NROTC program in June 1991. After Naval Flight Officer training, he reported to VAW-120 for further training in the E-2C Hawkeye.

Beaver's first fleet assignment was with VAW-122 supporting counter-narcotics operations.  He reported to VAW-121 on USS George Washington (CVN 73) for a Mediterranean and Arabian Gulf deployment in support of Operation Joint Endeavor and Operation Southern Watch.  He served with VAW-123 as the Maintenance officer on USS Enterprise (CVN 65) supporting Operations Iraqi Freedom and Enduring Freedom and commanded the squadron during work-ups and deployment supporting combat operations in the 5th Fleet area of operations.

His shore tours include Naval Strike and Air Warfare Center in Fallon, Nevada; Officer-in-Charge of the Weapons and Tactics Unit at Airborne Early Warning Wing Atlantic in Norfolk, Virginia; Placement Officer at the Navy Personnel Command in Millington, Tennessee; Action Officer on the Joint Chiefs of Staff in Arlington, Virginia; and, Fleet Readiness Reporting and assessment Branch Head on the U.S. Fleet Forces Command, also in Norfolk.

"We have 300-plus tenant commands who call Naval Station Norfolk home. 8,000 foot runway. 13 piers. It's a daily challenge but we have a great group of people who work here. Once again, it's an honor," Captain Beaver told NewsChannel 3's Todd Corillo Friday. 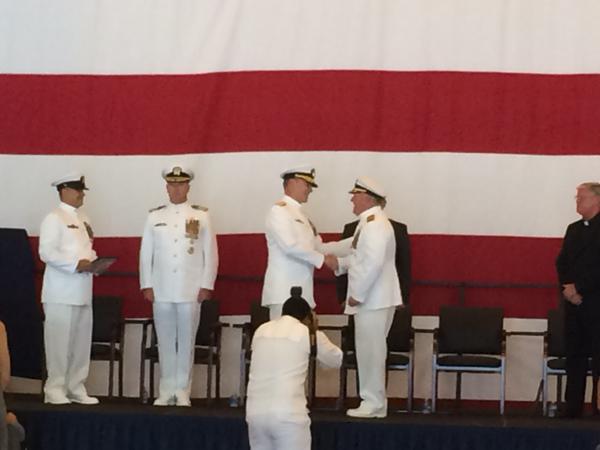