FERGUSON, Missouri – A man who police say was shot after unleashing a “remarkable amount of gunfire” on officers during Sunday’s protests in Ferguson, Missouri, now faces charges as he remains in critical condition at a local hospital.

“We cannot continue, we cannot talk about the good things that we have been talking about, if we are prevented from moving forward with this kind of violence,” Belmar said, adding that those resorting to violence are not protesters. 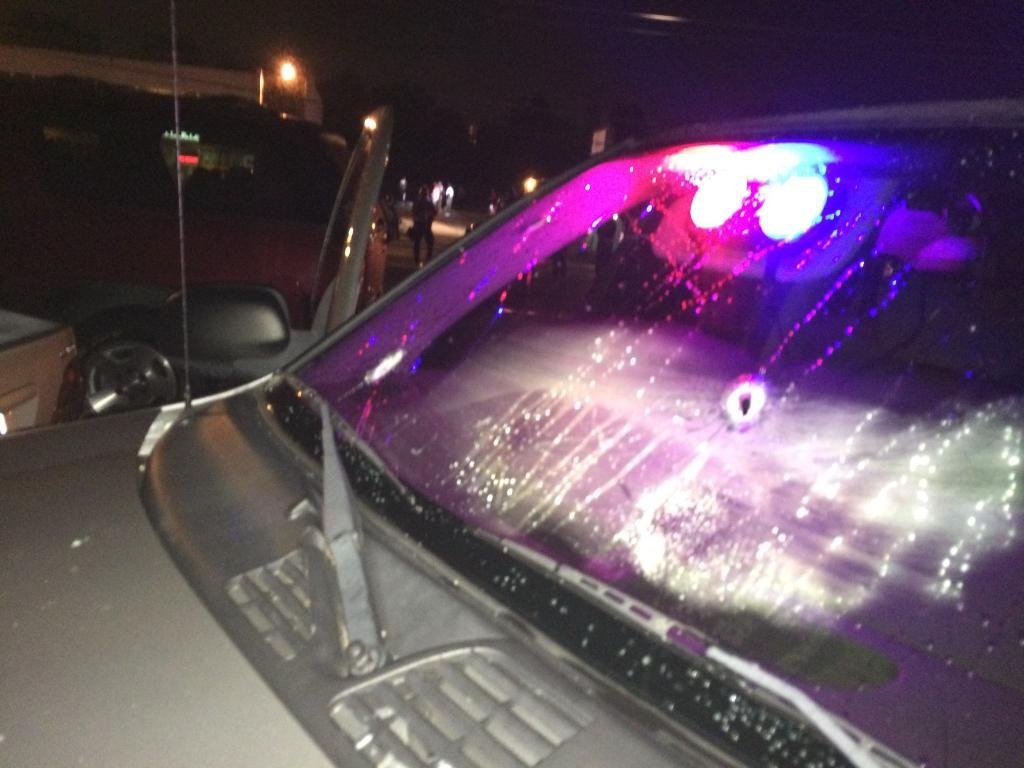 “Protesters are people who are out there to effect change,” he said. There were “several people shooting, several rounds shot.”

Vigils honored him throughout the day. Attendees observed 4½ minutes of silence to signify the 4½ hours Brown’s body lay on the street after the unarmed black teen was shot last year.

But the new gunfire shifted the focus Sunday night.

When officers first saw the suspect, he was running away after exchanging gunfire with an unknown person, police said.

Some gunfire rang out as reporters were talking to Ferguson’s acting police chief, Andre Anderson. A startled Anderson continued speaking with a steady burst of gunfire in the background. Crowds scattered.

Detectives in an unmarked SUV turned on its emergency lights and pursued the suspect, only to be shot at, according to Belmar. The bullets hit the vehicle’s hood and windshield several times, Belmar said.

As the detectives got out of the car, the suspect allegedly turned around and fired again.

Then he ran toward a fenced area, where he continued firing — until officers struck him multiple times, Belmar said.

The four plainclothes officers involved in the shooting have between six to 12 years of experience, he said. They have been placed on administrative leave.

By then, police presence had turned heavy, and rumors about the shooting flew.

Police and protesters faced off in a tense standoff on West Florissant Avenue, not far from Canfield Drive, where Brown was shot.

Several objects were thrown at police and some businesses damaged, the St. Louis County Police Department said. A journalist was attacked and robbed in a parking lot. Three St. Louis County police officers were injured: One was struck in the face by a brick, while two others were pepper-sprayed.

Police, with helmets and shields, pushed crowds back and called in tactical units.

Both were hospitalized with injuries not considered life-threatening, authorities said.

The teens were walking on a sidewalk near where Brown was killed a year ago.

Amid the chaos, some appealed for calm.

“Please pray for peace in Ferguson tonight and forever,” Danny Takhar tweeted. “And the police department really needs to look at what they did last year and today.”

Others posted a video of what they described as a shooting victim in Ferguson lying on the streets bleeding.

“Please get him some help! He’s bleeding out,” a voice said off camera.

The details of what happened on August 9, 2014, and the days of protest that followed have become a polarizing topic in Ferguson and America as a whole.

Brown’s killing by Officer Darren Wilson sparked outrage and protests nationwide against what some described as racial bias by the police.

A grand jury didn’t indict Wilson, and the U.S. Justice Department also declined to bring criminal charges, but the feds did issue a report that found the Ferguson Police Department and the city’s municipal court had engaged in a “pattern and practice” of discrimination against African-Americans, targeting them disproportionately for traffic stops, use of force and jail sentences.

But protesters — many of whom are skeptical of the local and federal inquiries into the case — point to examples of police misconduct exposed in the wake of Brown’s death. The case also led to new policing strategies, including the introduction of police body cameras.

But protesters are expected to return.

Events highlighting what’s described as a day of civil disobedience are planned for Monday. In the past, these have included blocking highways and shutting down big businesses across St. Louis County.