From his backyard in Durango, Colorado, Tom Bartles can see the Animas River, which was stained an unnatural orange.

The Environmental Protection Agency accidentally released millions of gallons of pollutants into the water last week, turning the typically blue water to the color of mustard.

“Everybody in town knew it was coming. It was hard to wake up in the morning and see an orange river,” Bartles told CNN. “Many of the locals in this region are probably going to experience a certain level of mourning.”

By Tuesday, the plume of heavy metals had largely moved on and the river looked clear. A tourist probably wouldn’t notice anything was off, but a local would know it’s not quite right, Bartles said.

And for him, the biggest concern wasn’t the immediate threat anyway; it’s the spill’s potential long-term and cumulative impact.

“This is a major, major problem,” said Jonathan Freedman, a toxicologist at the University of Louisville.

Typically it takes years or even decades for health problems from metals to develop.

However, preliminary tests show that the Animas River in Durango “doesn’t appear” to present a health risk, Colorado’s top health official said Tuesday. Following a spill of mine wastewater into the river, the metal levels along the river in the Durango area have returned to pre-incident levels, Dr. Larry Wolk said.

The river remains closed, but could reopen soon. 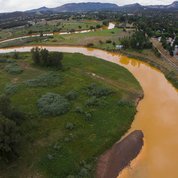 Officials said they believe the spill carried metals like iron, zinc and copper into a creek that feeds into the Animas.

It caused a spike in concentrations of total and dissolved metals in the water, the EPA said. It’s unclear exactly what effect that will have.

“It’s all questions at this point and very few answers,” said Bartles, who described the Animas as the “heartbeat of the community.”

A lot of people depend on the river for water, recreation, fishing and farming — not just in Durango, but up and down the waterway.

“We all share this crisis no matter where we live,” said Bartles. “And we all have to take responsibility.”

In neighboring New Mexico, the heartbreak of the spill was just as real as the toxic mix moved on.

“We came out here together, and we looked at the river and we cried,” Rosemary Hart told CNN affiliate KRQE.

She lives on the Animas and her family depends on a well to get water. The spill has made the water unusable, she said.

“My first concern is the next generations, and what they’re walking into,” Hart told KRQE.

The U.S. Geological Survey reported the size of the spill to be more than 3 million gallons, compared with the initial EPA estimate of 1 million gallons.

Gov. Susana Martinez has declared a state of emergency.

According to the EPA, the spill occurred when one of its teams was using heavy equipment to enter the Gold King Mine, a suspended mine north of Durango. Instead of entering the mine and beginning the process of pumping and treating the contaminated water inside as planned, the team accidentally caused it to flow into the nearby Animas.

Getting answers from the EPA is critical, according to Doris Stock, who lives along the river.

“We could lose our animals. It could damage our crops. It’ll destroy the soil,” she told KRQE.

Residents are looking for answers, but the EPA has few to offer at this point.

“Over the next few days, the waters in the river are going to clear up,” said Jeff Witte, New Mexico’s agriculture secretary. “That’s doesn’t mean they’re safe folks.”

Mark Hayes of the EPA reminded residents not to use the water until they get an all clear. When that will be, officials don’t know.

According to the EPA, last Wednesday’s spill caused a spike in metal concentrations, but levels “began to return to pre-event conditions” by Thursday.

However, according to the EPA’s own data, there were still very high levels of metals on Thursday. An arsenic sample tested 26 times higher than the EPA acceptable level.

Lead was even worse — much worse.

“Oh my God! Look at the lead!” said Joseph Landolph, a toxicologist at the University of Southern California, pointing to a lead level in the Animas River nearly 12,000 times higher than the acceptable level set by the EPA.

And one thing is for sure: these metals don’t disappear. Even if they go down to low levels in the water, they will likely be in the sediment and could be kicked up into the water at any time.

“This was such a horrible accident,” Landolph said. “I served on the EPA scientific advisory board, and I have the utmost respect for the agency. I wish them Godspeed in cleaning it up and containing it.”

Among those most hurting from the spill are businesses that depend on the Animas day to day.

Andy Corra is an owner of the Durango-based 4Corners Riversports, which has a sister company called 4Corners Whitewater.

“The river is basically closed so that shuts down all the rafting,” he said. “They’re losing all their revenue.”

“One day business is booming, and the next day, boom, it’s shut off,” said Corra. “It’s a huge bummer for the whole industry.”

He’s been in Durango for 35 years and loves it. He called the city a paradise and, without exaggeration, the greatest place in the world.

“We’ll weather it. There’s a bigger concern for the river, but the river will weather it as well,” said Corra.