On Thursday, August 6, a resident of the Glenwood area reported that when she arrived home she found a note in her yard regarding a leak in her water line.

Along with the “official looking” red notice the ground adjacent to the posted note had been spray painted with a line from the water meter to her home.  The victim called the telephone number posted on the notice and was told that the leak was found while checking lines in the neighborhood.

She was then told that the cost of the repairs would be over $1,000.

Suspicious, the woman called Virginia Beach Public Utilities and a crew responded, finding that the water line inside the meter box had been intentionally damaged.

A second report of this same scam was also reported within a few days in the Bellamy Plantation area. Bill Heinz says the crooks came to his house when he was out running errands and painted the blue line in his front yard. "It just concerned me that being my age we may have been targeted because of our age," Heinz told NewsChannel 3.

Heinz didn't fall for the scam because he works in construction.

Virginia Beach Police and Virginia Beach Public Utilities ask anyone with information regarding this crime to call Virginia Beach Crime Solvers at 1-888-LOCK-U-UP (1-888-562-5887) or by texting “VBTIP” and the information to CRIMES (274637).   Tipsters will remain anonymous and could be eligible for up to a $1,000 reward if their information leads to an arrest. 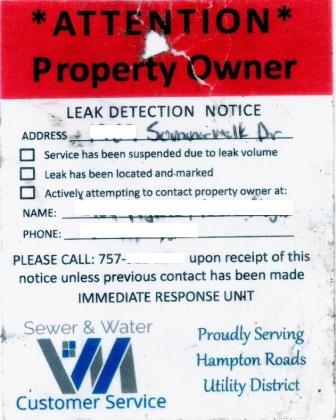