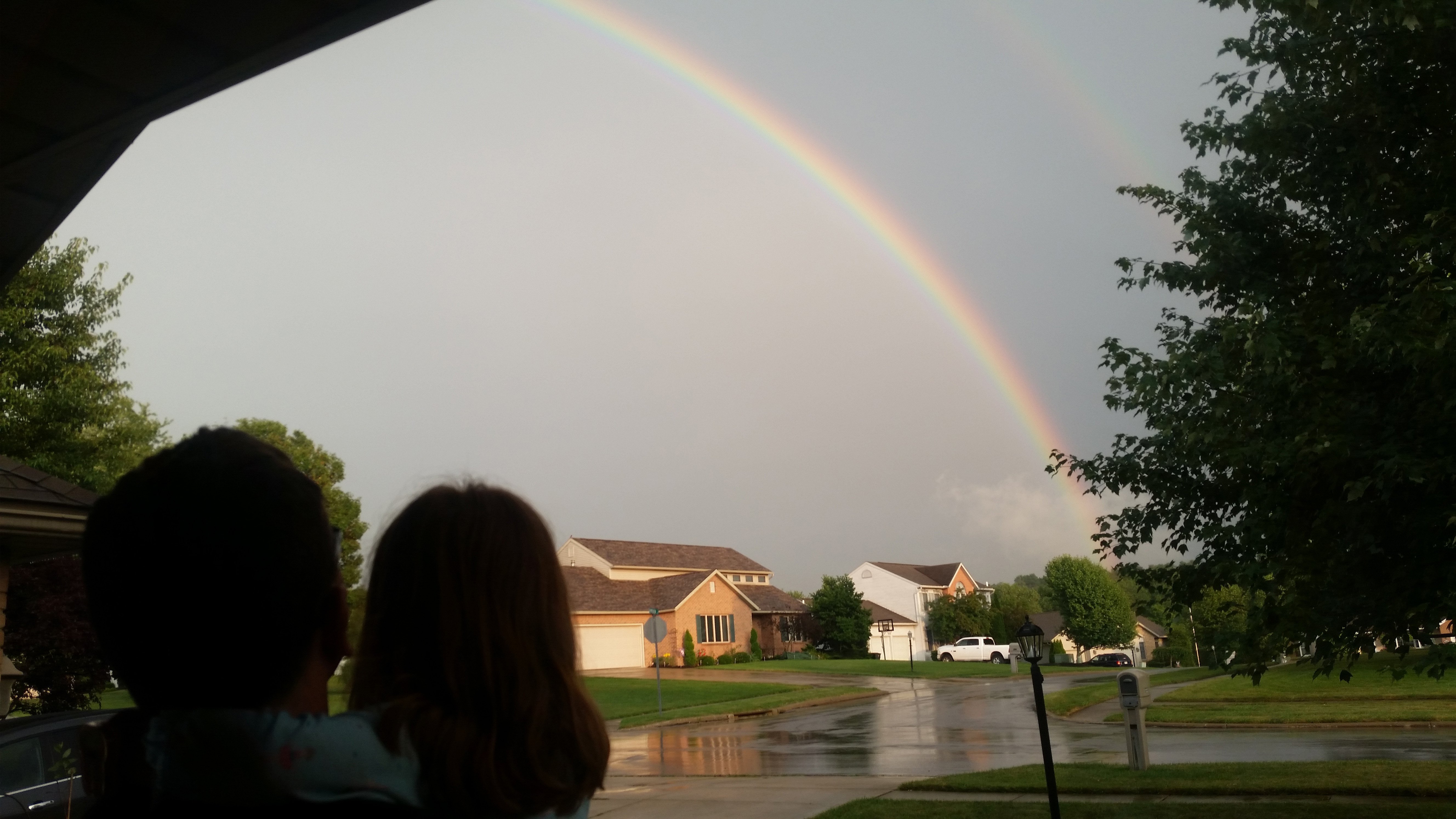 (CNN) — What would you want to see if you knew that you would go blind in the next five to 10 years?

Little Elizabeth “Lizzy” Myers doesn’t know it yet, but she’s losing her vision.

She’s only 5 years old. Her Ohio parents say they’ll tell her the news when she gets a little older and can understand it better. But in the meantime, they’re helping her see as much beauty as she can in her young life, even if it comes at the expense of sleep sometimes.

“Yesterday I ran upstairs and woke her up because there was the most beautiful rainbow outside,” said her mother, Christine Myers. “I think I scared her to death at first, but when I carried her out to see the rainbow she loved it and we sat there for maybe 20 or 30 minutes. It was the longest rainbow and it was so bright and you could see all the colors. I don’t think even I have seen so many.”

There’s an urgency to see such beauty because Lizzy has Usher Syndrome Type II. It’s a rare genetic disorder, so rare that approximately only one in 17,000 people in United States have been diagnosed with it. Children born with the disease have moderate to severe hearing loss and retinitis pigmentosa, meaning Lizzy may become legally blind and will likely lose most of her ability to hear. She wears hearing aids now.

Lizzy’s dad, Steve Myers, said when they first heard the diagnosis, “we were devastated, although we know many children have it much worse.”

Doctors who work with Ushers patients say this is not the end for Lizzy.

Dr. Lotfi Merabet, a professor of ophthalmology at Harvard Medical School, said with Lizzy’s parents’ support and “the support of the community, her life will be full and she will continue to thrive.”

Early intervention is key, Merabet said, because Lizzy’s brain is still developing. What she learns now will help her communicate and interact and prepare her brain for the changes that are coming.

“The brain can adapt and help you develop skills,” he said. “Be reassured she is not going into a world of darkness and silence. Some 20 to 30 years from now, she will likely remember what her mother looked like and her father looked like and what a sunrise looked like. She will experience the world around her in a tremendous way still.”

Since the severity of her eventual sight loss and the speed of its progression are unclear, her parents are determined to expose Lizzy to as much beauty as they can “cram into her beautiful little mind,” according to her father.

They started with activities that involved low light, because since that’s what she’ll lose the ability to see first. “We looked at the stars, we went to the local observatory, we caught lightning bugs, we’ve gone to see plays,” her father said.

They took small road trips, visiting museums and zoos. They drove through the Smoky Mountains, and a Hilton Head vacation last week knocked another item off the “visual bucket list.”

“We woke her up to see the sunrise. She was pretty tired and not overly thrilled at first, but eventually she said ‘pretty,’ and then immediately became more interested in the sand,” her father said, laughing. “I know I had never seen one before and I was moved.”

That’s how many others have felt, when they heard the family’s story. The Myers told their local newspaper about their trip with Lizzy to the Warren Rupp Observatory in hopes of raising awareness about Usher Syndrome.

The national media then picked up their story, and the family has now heard from people all over the world. Even a general manager for Turkish Airlines got in touch to offer them tickets to anywhere they wanted to go. Humbled, the family accepted a trip to Rome so they can show Lizzy beautiful art and sculptures. “Would she appreciate mosaics when she is 12 a little more? Maybe, but she may not have that chance,” Steve said.

The trip will also be a spiritual one, he added. The family is Catholic, and they hope to take Lizzy to the Vatican.

“I can’t imagine a better place to ask for something special for our little girl.”

Stop and see the roses

Merabet believes Lizzy’s parents’ engagement and emotional support will help the little girl hang on to these memories long into her adult life.

The doctor said Lizzy’s story should remind everyone that “regardless of any hindrances we may experience, we all should stop and see the beauty in this world, we should all appreciate the world around us.”

“Until you deal with something like this, you do often rush to get to the next thing,” Christine said. “This has made us slow down a little in our day-to-day lives. Now, we stop and we look and we take it all in and we talk about it. This is what it’s all about, isn’t it?”