Watchstanders at Coast Guard Station Portsmouth received notification at 11:38 a.m. of a 36-foot sailboat with a man and a woman aboard taking on water outside of Norfolk Naval Base.

The crew of the Coast Guard Cutter Heron was in the area performing exercises and diverted to assist the sailboat. A Station 25-foot boat crew launched from Portsmouth to assist at 11:42 a.m. and arrived on scene at 11:50 a.m.

The cutter Heron crew transferred rescue efforts to the Station Portsmouth boat crew, who dewatered the sailboat while bringing it into a side tow.

Personnel from Blue Water Marina services safely brought the vessel out of the water. There were no reported injuries. 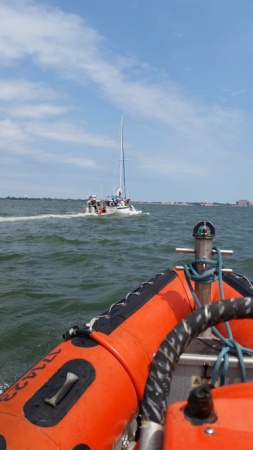