9/11 anniversary: America remembers lives lost on one of its darkest days

(CNN) -- Bells are tolling and tears are flowing as the nation marks a dark day in sorrowful yet hopeful ceremonies.

Fourteen years ago Friday, terrorists hijacked four passenger planes and rammed two into New York City's World Trade Center and a third one into the Pentagon outside Washington.

A fourth jetliner crash-landed on an empty field in Pennsylvania.

By the time the carnage was over, the hijackers had killed 2,977 people in the deadliest terrorist attack on American soil.

People, buildings and planes fell from the sky. Terrified strangers became friends as Americans united on a day that changed the world forever.

On Friday, a resilient nation looks to the future while remembering the past.

Here are the main events that paid tribute to the many lives lost on September 11, 2001:

At the World Trade Center, where most of the victims were, bagpipers and drummers provided solemn tunes to accompany a ceremony in which people read the names of the dead.

Moments of silence were observed at the specific times when the planes struck.

More than 300 firefighters were among those who perished in the attacks and the collapse of the towers. Dozens more were police officers.

Hundreds of miles away, a passenger jetliner crashed near Shanksville, Pennsylvania, at 10:03 a.m. 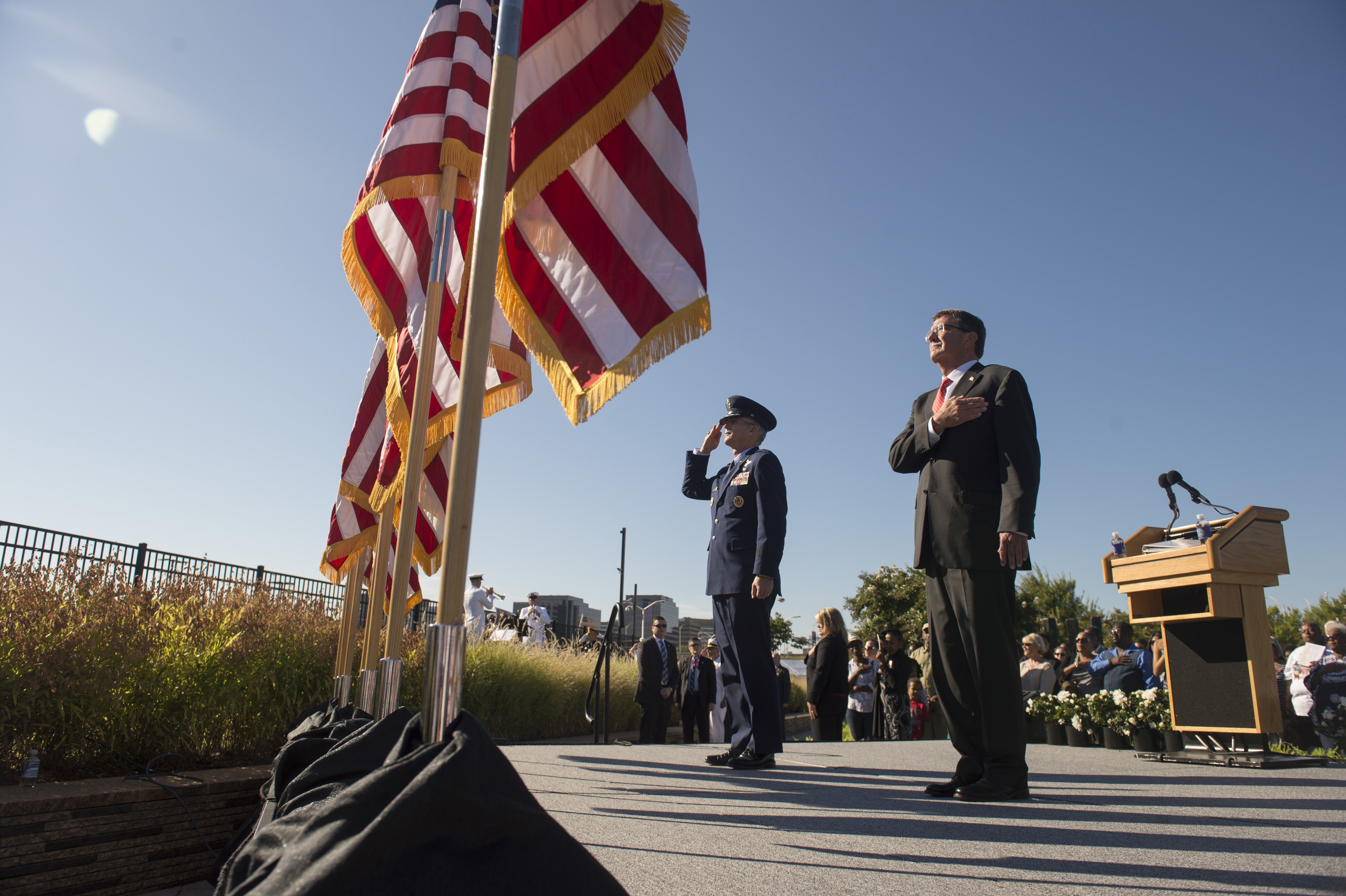 Crowds were to mark a moment of silence at that exact time and read out the names of the victims.

Forty passengers and crew members aboard United Airlines Flight 93 died when the plane crashed into the field. It is believed that the hijackers crashed the plane in that location, rather than their unknown target, after passengers and the crew attempted to retake control.

At sunrise a flag was unfurled over the side of the Pentagon, where 184 people were killed when hijacked American Airlines Flight 77 crashed into the building.

Shortly after 9:30 a.m. Friday, a memorial ceremony began at the Pentagon Memorial, attended by relatives of the victims. It included wreath laying and remarks by Defense Secretary Ash Carter. Flight 77 hit the Pentagon at 9:37 a.m. on 9/11.

At the White House, President Barack Obama and first lady Michelle Obama stepped onto the south lawn for a minute of silence, heads bowed, at 8:46 a.m. -- the time that the first jet hit the World Trade Center.

Obama made no comment at that observance, but he was later scheduled to visit Fort Meade in Maryland, where he will talk with troops and express his appreciation.

"The President very much values face time with troops -- listening, asking and answering questions, and he looks forward to taking time on the anniversary of 9/11 to engage directly with service members," Pentagon spokesman Peter Cook said.

Outside the Justice Department headquarters in Washington, a crew Friday morning planted a pear tree -- an offspring of a tree at the World Trade Center plaza that survived the buildings' fall. The original tree stands at the National September 11 Memorial in New York.

Attorney General Loretta Lynch, speaking at the ceremony, said the tree is a reminder that "we can endure, we can prevail, and we, too, can bloom again."