Hampton, Va. - Police need your help finding suspects in connection with the robbery of a Family Dollar store.

Investigators say that three suspects entered the business, showed the clerk a gun and demanded money.

An employee at the store tells NewsChannel 3 that two of the workers were finishing up for the night when the place was robbed.

Some customers were disturbed by the robbery.

Angela Bumpers said she and her family go to the Family Dollar on Aberdeen Road all the time. She said, "You could be anywhere and anything can happen. Glad everyone is okay."

No one was hurt, but an employee at the store told NewsChannel 3 it was terrifying for the two workers who were trying to close for the night.

The employees handled over some cash and the three took off.

Now police are looking for them.

"Terrible. It's terrible on any given day. I mean people can quit what they're doing and get jobs. It just doesn't make sense,” said Charles France, who is fed up with the violence he has heard about in Hampton.

An employee said there were no customers in the store when the robbery took place.

Customers we spoke with felt bad for the employees.
Bradford said it's crimes like this that keep inside when the sun goes down.

"I don't like being out at night by myself when it's dark," said Bradford.

The first suspect is described as a male who was last seen wearing a gray hoodie with a possible Statue of Liberty design, black face mask and black gloves.

The second suspect is described as a heavy set male who was last seen wearing a blue hoodie and a black face mask.

The third suspect is described as a male who was last seen wearing a black hoodie and black mask. He was also carrying a bag.

Tipsters can also send an anonymous tip via text message to the Crime Line by texting "HAMPTONPDTIPS plus your tip" to 274637 (CRIMES). Crime Line callers remain anonymous and never appear in court. If a Crime Line call results in an arrest, the caller is eligible for a reward up to $1,000.00. 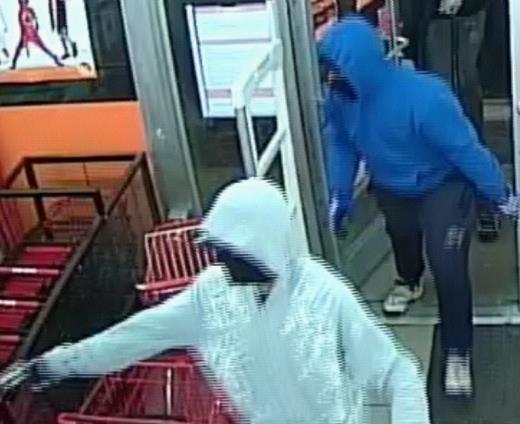