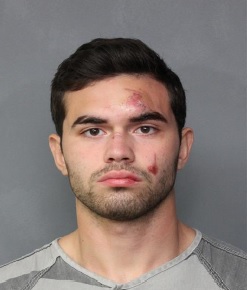 According to an ODU crime alert, the incident occurred on Thursday, October 22nd.

Dispatchers were called at 2:30 a.m. and were told that three men had forced their way into a home in the 1400 block of Melrose Parkway.

The men assaulted two people inside of the home. Four people were home at the time the intruders broke in police say.

The victims’ injuries have been described as serious.

Police were able to arrest one of the suspects. The other two tried to run away from the area but they were caught just a short distance away.

They’ve identified the suspects as Jacob Brian Tuel, Nicholas James Howerin and Zachary Kelleher. They are all from the city of Virginia Beach.

They’ve been charged with armed burglary, malicious wounding, unlawfully wearing a mask, robbery, use of a firearm in the commission of a felony, and conspiracy to commit a felony.

They are all being held without bond at the Norfolk City Jail.