(CNN) — Archaeologists in Pylos, southwest Greece, have excavated the intact tomb of a wealthy Bronze Age warrior-king buried about 3,500 years ago, in a discovery the team’s co-leader hailed as “one of the most magnificent displays of prehistoric wealth discovered in mainland Greece in the past 65 years.”

Greece’s Ministry of Culture announced the discovery of the trove, which contained more than 1,400 objects, including a three-foot long bronze sword with an ivory hilt, four solid gold rings — more than found at any single burial elsewhere in Greece — and ivory combs and carvings, depicting griffons and a lion.

Also in the shaft tomb was a unique necklace of box-shaped golden wires, gold and silver goblets, and more than 50 intricately carved seals — made in the style of the Minoan culture of the large island of Crete, to the southeast — depicting goddesses, reeds, altars, lions and men jumping over bulls.

The find has astonished and excited the archaeological community, both for the rare richness of the trove and the insights it promises to reveal on the ancient world at the dawn of European civilization.

“We were certainly not expecting to find anything like this,” said Sharon Stocker who, along with husband Jack Davis, led the team of archaeologists from the University of Cincinnati in discovering the site.

“We were not looking for tombs in the first place and finding an unlooted tomb is so extremely rare. This is truly phenomenal.” 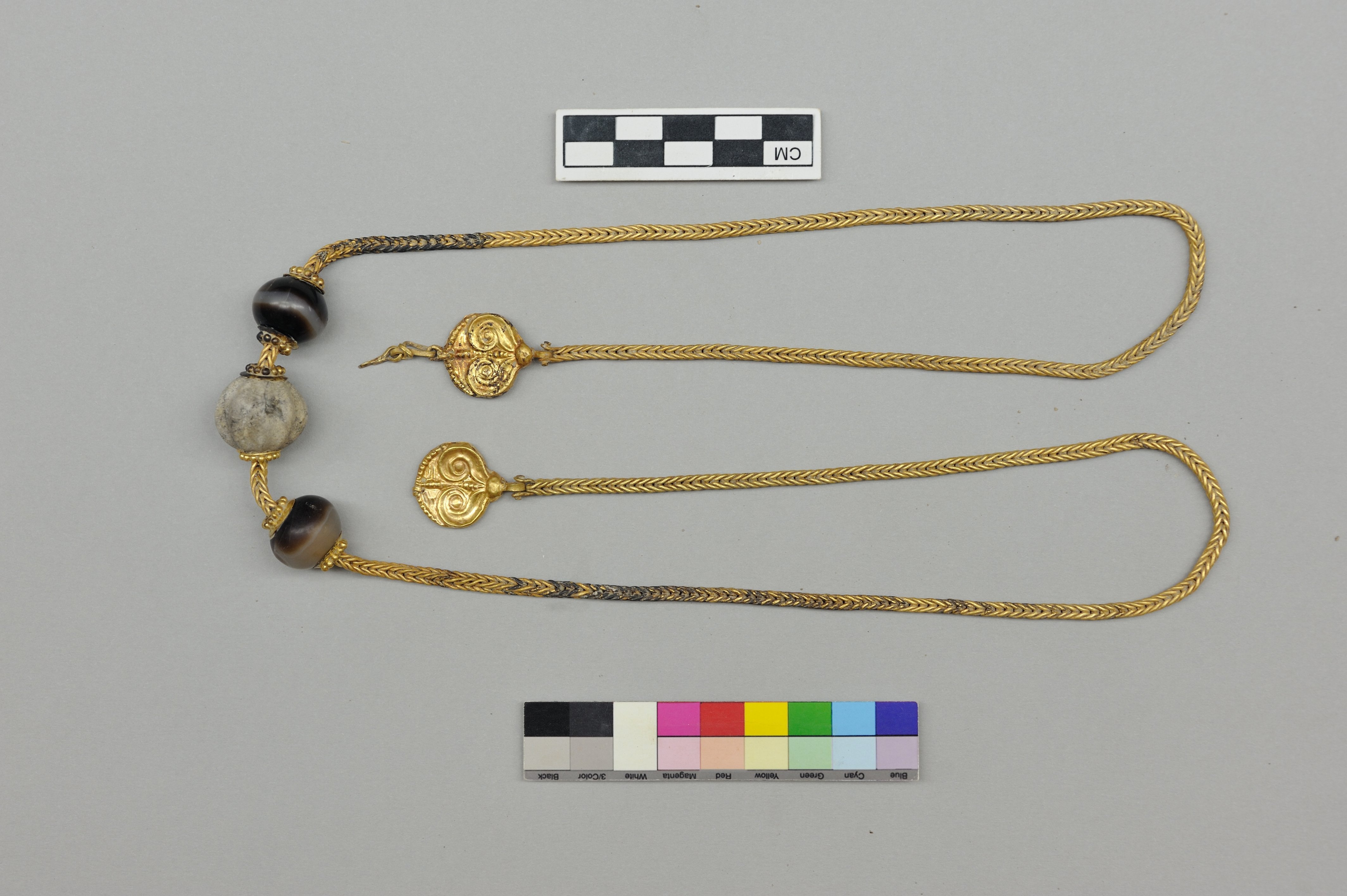 Near Palace of Nestor

The team was digging about 150 meters from the Palace of Nestor in ancient Pylos, an important center of Mycenaean Greece mentioned in Homer’s “Odyssey,” when they discovered the intact shaft tomb, which predates the palace by several centuries.

The wealth of objects found within the single burial site — in an area where sites of multiple burials were the norm — was a “virtually unique situation within the entire Aegean world,” Davis told CNN.

The find promised to shed light on how the more developed civilization on Crete at the time — Europe’s first advanced civilization — would inform what would develop into the Mycenaean palace culture on the mainland.

For example, the large amount of seals found at the site appeared to have been produced in Crete, where they played an important, functional role in the bureaucratic culture of the island. Their presence on the mainland, centuries before a palace culture arose, suggested that to the warrior-king they held a different meaning, and were likely being collected “for their precious nature, their exotic nature and ideographic content,” said Davis.

“It’s the contextual information — what was found where and together with what — that gives us the tools we need to tease out the meaning that these objects would have had to the community that buried them with him.”

The team’s predecessors at the University of Cincinnati have impressive credentials in the area. Carl Blegen, a noted archaeologist from the institution, first located the palace at Pylos in 1939.

So who was the man in the tomb?

“So far we have no idea of the identity of this man,” said Stocker — other than he was someone very important and very rich.

“We are looking at a period in Greece where people where usually buried with ceramic objects but this man was so rich that there were no ceramics. He was buried with bronze, silver and gold.”

His bones showed he had been of a robust stature — which, along with martial objects found in the grave, suggested he was a warrior, she said — although he could also have been a priest, as many of the objects found with him had ritual significance.

The find also offered clues to understanding gender at the time. “Here we have a man buried with combs, necklaces and a bronze mirror. If this was a multiple burials tomb containing women, we would assume these object belonged to the women,” she said.

Greece’s general secretary of the Ministry of Culture Maria Vlazaki said the find showed “the immense wealth of Greece’s history and civilization and reminds us every once in a while yet another extraordinary find, like this tomb, will see the light of day.”

She said it was “extremely rare for an unlooted tomb of such great significance to be unearthed.”

“The finds are very impressive as is the scale of wealth that they display about the person buried there. Finding so much gold and silver is very unusual.”

Dylan Rogers, assistant director of the American School of Classical Studies at Athens, said the discovery of the site had been the talk of the archaeological community for some time.

“We’ve all kind of known about it here in Athens and we’ve had to keep a lock on it,” he said.

“This is unique in that it’s one of the largest assemblages of this Bronze Age material that’s been found in a long time.”