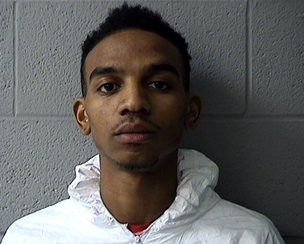 The New Kent Sheriff’s Office got a call around 6:30 a.m. on Friday from a caller who said they were robbed at gunpoint and their vehicle had been stolen.

The victim said the stolen car and a small red sports car drove away from the area of North Courthouse Road and Kentland Trail.

Virginia State Police caught up with both vehicles around 6:45 a.m. on State Route 106 in New Kent County.

The vehicle sped away from the troopers.  The stolen car was stopped on Route 106 in Charles City County.  When the car was stopped, several of the suspects got out of the car and ran away into the woods.

Officers from the New Kent Sheriff’s Office and the Virginia State Police searched the area with the help of a police dog and helicopter.

The suspects were found and taken into custody around 9:30 a.m.

Anthony Tyrone Williams, Colin Ray Dugger, David Dewayne Jackson and Devanta Lightfoot were charged with armed carjacking, conspiracy to commit armed carjacking, use of a firearm in the commission of a felony, grand larceny and credit card theft.

Jackson was also charged with possession of a firearm by a convicted felon.  Lightfoot was charged with felony elude and driving while suspended.

Police took both vehicles for processing.

The four suspects went to the New Kent Sheriff’s Office to be interviewed.

All suspects are in Henrico Jail East and are held on no bond.