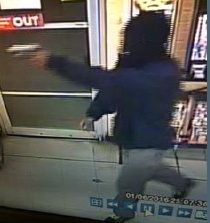 Both robberies happened on January 6.

Police responded to a call about a robbery at the Family Dollar in the 900 block of LaSalle Avenue around 10 p.m. Investigators say the suspect came into the store, pulled out a gun and demanded cash.

After receiving the money, the suspect ran away towards Settler’s Landing Road.

Police responded to a second robbery at Kim’s Chinese Food in the 500 block of LaSalle Avenue. Investigators say the suspect came into the store, pulled out a gun and demanded money. After getting the cash, he ran away in an unknown direction.

Surveillance video from each robbery shows that the man is the same suspect for both incidents.

The suspect is described as a black male, dark-skin tone, around 6 feet and was last observed wearing a black hooded sweatshirt, a black bandana covering his face, dark gray sweatpants, and dark colored shoes with light colored shoe laces.

Anyone with information that will assist police is encouraged to contact the Hampton Police Division at 727-6111 or the Crime Line at 1-888-LOCK-U-UP. Tipsters can also send an anonymous tip via text message to the Crime Line by texting “HAMPTONPDTIPS plus your tip” to 274637 (CRIMES). Crime Line callers remain anonymous and never appear in court. If a Crime Line call results in an arrest, the caller is eligible for a reward up to $1,000.00.