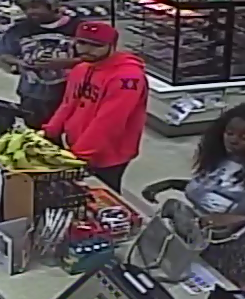 Portsmouth, Va. – A man is wanted for trying to rob and shooting a taxi driver in Portsmouth on Christmas Eve.

Police say at around 11:45 p.m., a taxi driver was waiting a stop light at George Washington Highway and Elm Avenue.

A man came up to him and told the taxi driver that he needed a ride to the intersection of Lincoln Street and Elm Avenue.

As the two got to the intersection, the suspect then told the driver that he needed to go to Lincoln Street and Charleston Avenue.

Once they arrived at the next location, the driver stopped the car and the suspect then took out a gun and demanded everything the victim had.

The victim got out of the vehicle and started to run away. Police say the suspect fired two shots at the driver, grazing his arm.

The suspect appears to be a lighter skinned black male in his mid to late twenties, with a small amount of facial hair. He stands approximately 5’8”-5’10” tall and was last seen wearing a hoodie with black writing on the front and on the upper left shoulder, black pants, white sneakers, and a baseball cap with a black bill.