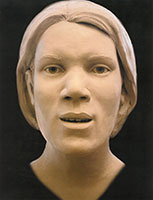 On January 12, the medical examiner released facial models of five men and three women whose faces were found in separate areas between 1972 and 2014.

“We’re working with local law enforcement authorities to help identify these individuals, and we encourage anyone with information that may lead to identifying these individuals profiled to contact us,” Chief Medical Examiner William Gormley said.

Forensic anthropologists and artists with the FBI’s Forensic Anthropology Services and Forensic Imaging Unit made the facial approximations.

Photographs of the facial models have been entered into the case files of the National Missing and Unidentified Persons Systems, a computer search engine funded by the National Institute of Justice to help match missing and unidentified persons.