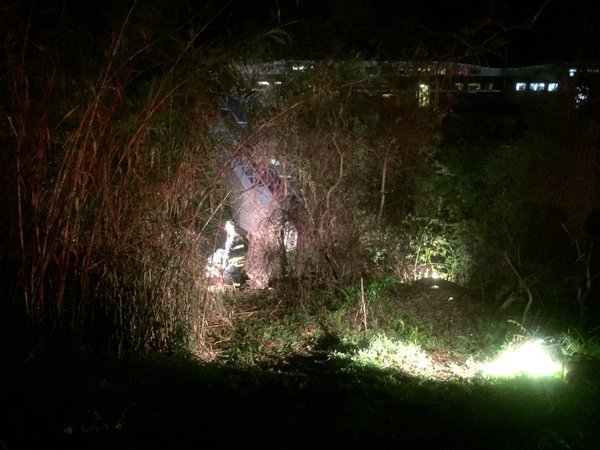 A train car went off the rails and ended up in a creek in Northern California on Monday night, according to the Alameda County Fire Department.

Nine people were hurt when the train struck a tree that had fallen in the middle of the tracks. Four of the injuries were described as “serious” but not life-threatening.

Authorities earlier reported that 14 had been injured.

“The train flipped over and then I saw people, you know, falling over from the other side,” passenger Jay Vijayen told CNN affiliate KGO. “The next thing we knew we started seeing water coming into the bottom of the train. It was rising fast.”

All of the passengers from the derailed train have been removed, authorities said.

The ACE train — which runs from Stockton to San Jose — derailed near Niles Canyon, the company said. Train service has been canceled for tomorrow.

According to Steve Walker, a spokesman for Altamont Corridor Express, the lead car on the train derailed and ended up in the Alameda creek after the initial collision. The second car also derailed, but remained upright, he said.

There were a total of 214 passengers on board.

The Fremont Police Department said it expects roads in the area to remain closed for the next several hours.