Seattle, Wash. — After more than 24 hours, the man in an 80-feet sequoia tree in downtown Seattle has finally climbed down, according to Q13 Fox.

#ManInTree is now on the ground and in contact with police. Officers still in speaking w/ him and working to safely resolve this incident.

Witnesses at the scene cheered as the man finally reached the ground. He appeared to pick up an apple and start eating it.

Police gave the man space for a few minutes after he reached the ground before loading him into an ambulance for a full medical evaluation.

After ~25 hours, #ManInTree is down safely and in police custody. We'll be getting him a medical eval shortly. pic.twitter.com/N5LJmwMtIh

Several streets were blocked off in the area of 4th Ave and Stewart for the duration of the incident.

Authorities were first alerted to the unidentified man in the tree around 11 a.m. Tuesday and he was still clinging to its branches at 9a.m. Wednesday.

“Issue appears to be between the man and the tree,” Seattle police tweeted.

No one knows why he climbed up there — or what he wants, if anything.

Authorities on Tuesday said the man wasn’t being cooperative and at one point threw an apple and pine cones at paramedics and officers. 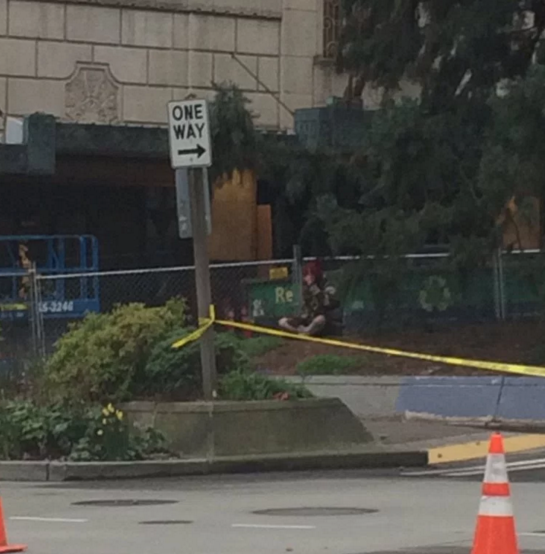