Internet trolls hijacked George Zimmerman’s auction for the gun used to kill Trayvon Martin, jacking up the price to $65 million for a time early Friday with a series of likely prank bids ridiculing the former neighborhood watch volunteer.

The top bidder for a time was one “Racist McShootface,” although other bids from a “Tamir Rice” — the name of a Cleveland child killed by police last year — also appear in the list of offers for the weapon Zimmerman used in his 2012 Sanford, Florida, confrontation with 17-year-old Martin.

The “Racist McShootface” bids were deleted Friday morning from the United Gun Group auction site, but the trolling prompted one apparently serious bidder to call the trolls “losers” and express hope that their “children get murdered.” 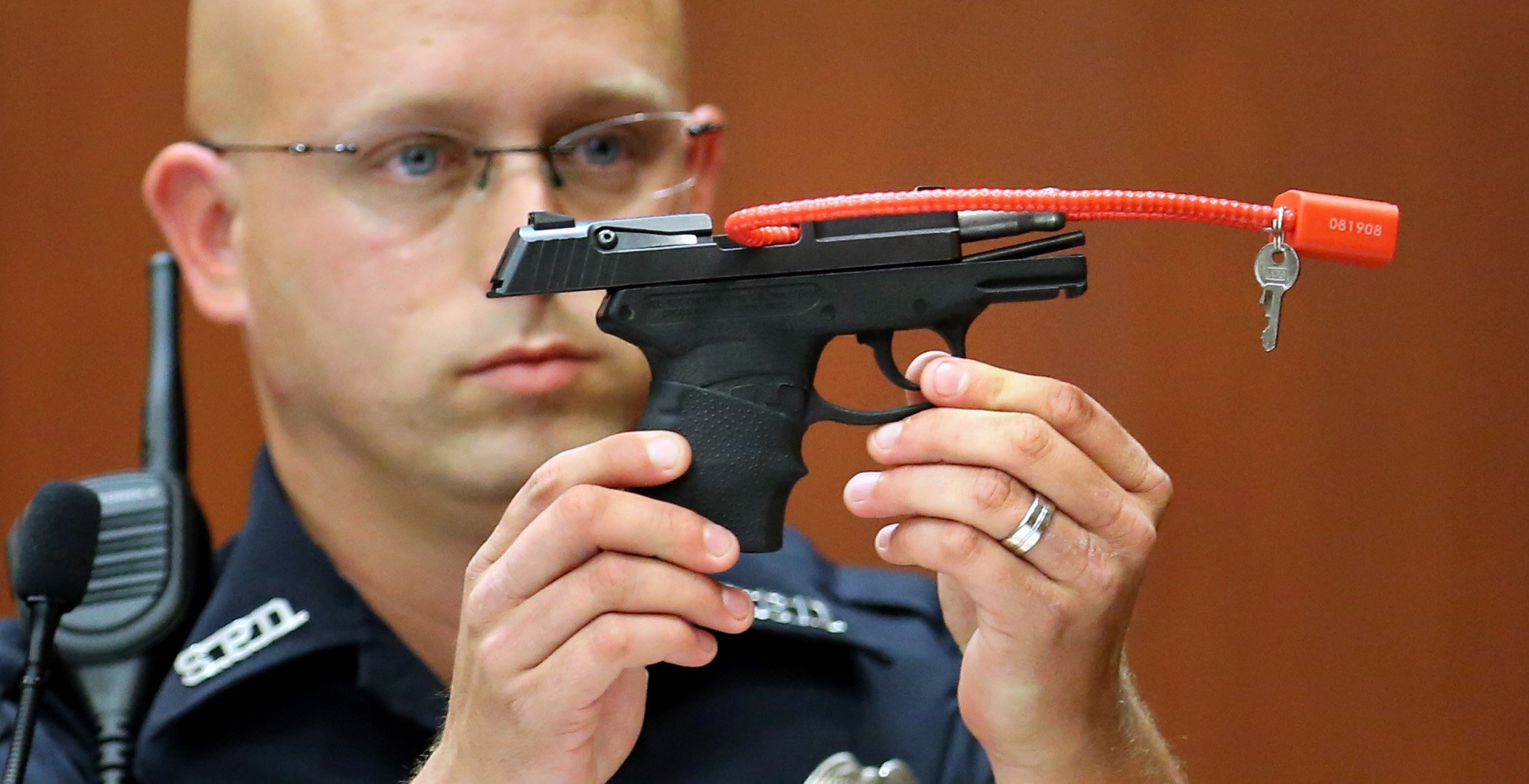 “Obviously the jury didn’t think it was murder,” the bidder identified as Brez Morrell posted of Zimmerman’s 2013 acquittal. “He did nothing wrong.”

The $65 million bid was later replaced by one from a user named Craig Bryant. It was unclear if that bid was serious.

Zimmerman — seen by some as a national pariah and by others as a hero — announced plans to sell the Kel-Tec PF-9 weapon on Wednesday. The 9mm pistol carries a suggested price of $356.36 on the manufacturer’s website.

On Friday afternoon, United Gun Group posted a statement to Twitter expressing condolences to Martin’s family, but appearing to support the continuation of Zimmerman’s auction.

“Unless the law has been violated, it is the intention of United Gun Group to allow its members to use any of the available features,” the statement read.

On February 26, 2012, Zimmerman called 911 to report a “suspicious person” in his neighborhood. Police told him not to get out of the car or approach Martin, but he disregarded the instructions and a confrontation ensued.

Zimmerman said Martin attacked him and he shot the unarmed teenager in self-defense. The case shined a spotlight on Florida laws allowing the use of deadly force and on issues of race.

In his post introducing the auction, Zimmerman said he was “honored and humbled to announce the sale of an American Firearm Icon.”

He said some of the proceeds would be used to fight Black Lives Matter violence against police, and to “ensure the demise of (State’s Attorney) Angela Correy’s persecution career and Hillary Clinton’s anti-firearm rhetoric.”

Zimmerman had first tried to sell the pistol through a site called GunBroker, but the website sent out a message Thursday afternoon saying it had rejected the idea.

“Our site rules state that we reserve the right to reject listings at our sole discretion, and have done so with the Zimmerman listing,” a GunBroker statement said. “We want no part in the listing on our web site or in any of the publicity it is receiving.”

Zimmerman told CNN he moved the auction to another website, giving a different reason than GunBroker did.

“Unfortunately, (the site) was not prepared for the traffic and publicity surrounding the auction of my firearm,” Zimmerman said in a text. “It has now been placed with another auction house.”

That site, United Gun Group, put out a statement Thursday night saying the gun would not be sold on its site, but the auction appeared to proceed anyway.

After initially saying the site would not allow the auction, founder Todd Underwood said in an email to CNN that an official response would be released Friday.

The site tweeted Thursday night to say it does not profit from auctions and was not responsible for auctions on its site.

Zimmerman announced his plan to auction the weapon in an interview Wednesday with WOFL-TV in Orlando, Florida.

“I recently received it back from the Department of Justice,” he said. “They took it after my trial, after I was exonerated.”

Zimmerman told the station he has had death threats since he put the gun up for sale.

“What I’ve decided to do is not cower,” he said. “I’m a free American. I can do what I want with my possessions.”

Since his acquittal in 2013, Zimmerman has made news several times, including an arrest in a domestic violence case. Prosecutors dropped the charges after his girlfriend refused to cooperate with the investigation.

In posting the weapon for auction, Zimmerman described the weapon as a “piece of American History.”

“The firearm for sale is the firearm that was used to defend my life and end the brutal attack from Trayvon Martin on 2/26/2012,” Zimmerman apparently wrote in the posts.

“The pistol currently has the case number written on it in silver permanent marker,” he wrote.

Zimmerman said museums such as the Smithsonian Institution have “expressed interest in owning and displaying the firearm.”

But the Washington-based Smithsonian denied it has any interest in the weapon.

“We have never expressed interest in collecting George Zimmerman’s firearm, and have no plans to ever collect or display it in any museums,” it said in a statement.

Martin’s family declined to comment on the purported sale of the gun, saying the Trayvon Martin Foundation is focused on ending gun violence in the United States.

“It’s like he is shooting and killing Trayvon all over again four years later with this attempt to auction off this gun like it’s some kind of trophy,” Crump said. “I mean, it’s offensive, it’s outrageous and it’s insulting.”

The gun sale is not Zimmerman’s first effort at auction.

In 2013, he sold a painting of the U.S. flag depicted in blue with the words “GOD ONE NATION with LIBERTY and JUSTICE FOR ALL” inscribed on it.