“Hate will never win,” James Corden said. “Together, we have to make sure of that.”

He said “tonight’s show stands as a symbol and a celebration of that principle.”

Immediately following Corden’s remarks, the cast of “Hamilton” performed an opening number on stage, with one significant change: Their usual prop muskets were set aside. The Tonys, Broadway’s biggest night of the year, began on time at 8 p.m. ET, televised by CBS.

“The Broadway community really wanted to continue with this, as did we,” CBS chief executive Les Moonves told CNNMoney. “It’s important that the show go on. And the show’s being done in honor of the victims.”

One of the early Tony winners, Lin-Manuel Miranda, the creator of “Hamilton,” held back tears during his impassioned acceptance speech Best Original Score.

The “Hamilton” star’s speech was an emotional reading of a sonnet he wrote for his wife which focused on the mass shooting that took place in Orlando early Sunday morning.

Outside, the scene on the red carpet before the program began was noticeably subdued. Still, hundreds of fans shouted as Broadway stars arrived and posed for photos. Some attendees wore silver ribbons to commemorate the terror attack. 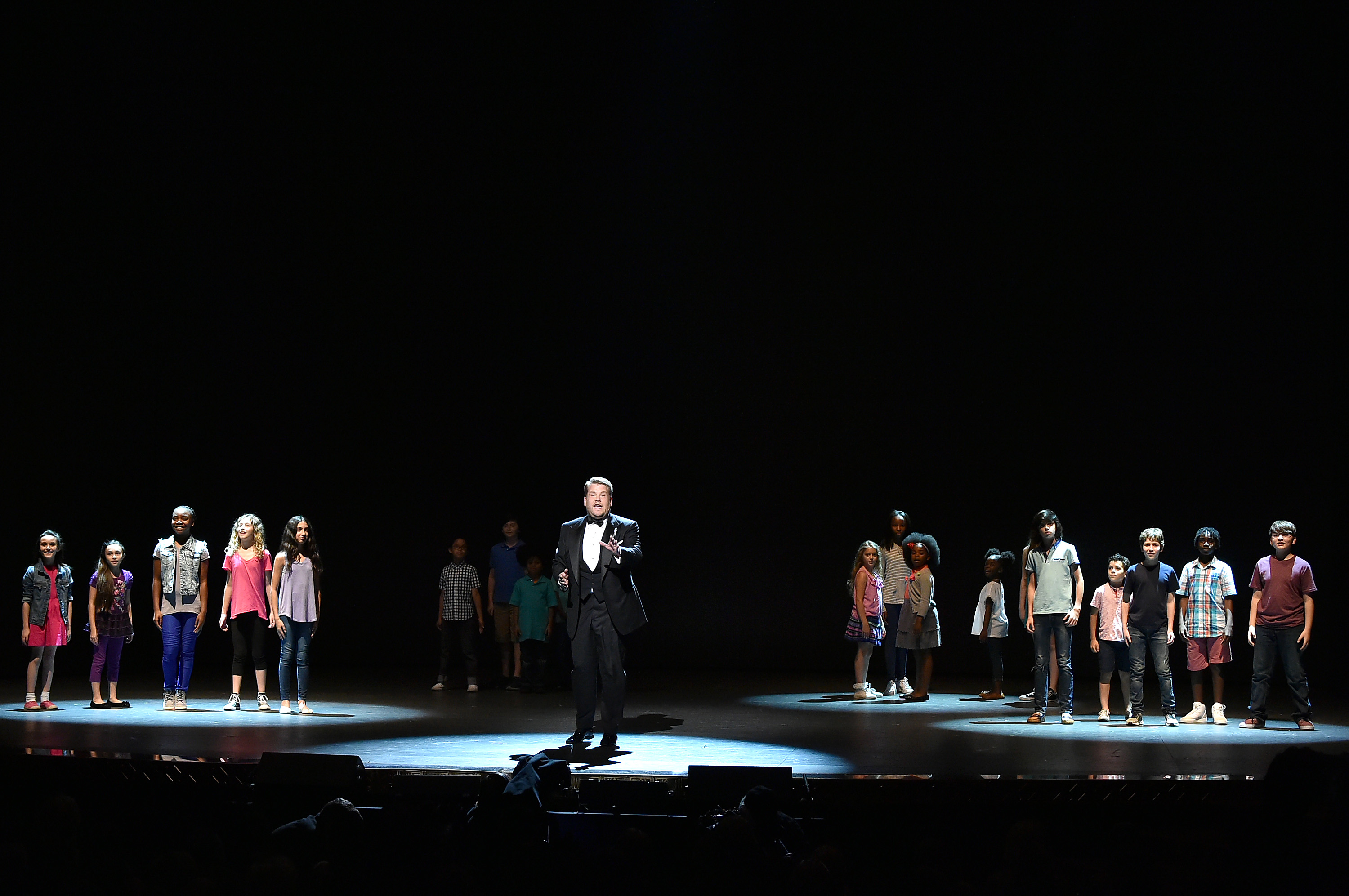 And a few dozen members of the group Everytown for Gun Safety held up signs with messages decrying gun violence.

Corden set the tone for the evening by saying, “On behalf of the whole theater community and every person in this room, our hearts go out to all of those affected by this atrocity.

“All we can say is, you are not on your own right now,” he said. “Your tragedy is our tragedy,” Corden said. “Theater is a place where every race, creed, sexuality, and gender is equal, is embraced, and is loved.”

Corden was responding to the shooting spree at the Orlando gay nightclub Pulse, which has left an estimated 50 dead and another 53 injured. It is the worst mass shooting in U.S. history.

“Tonight, every note I sing will be in remembrance of the lives taken in Orlando,” actress and Tony nominee Laura Benanti tweeted Sunday afternoon.

While she was preparing, longtime Tony voter Colleen J-Roggensack wrote, “I am reminded theatre heals and tonite we will celebrate the good in the world.”

When the attack was first reported, there was speculation that the show or the red carpet might be delayed or changed in some way.

Moonves confirmed that discussions took place early Sunday morning about what to do.

But the organizers said in a mid-morning statement that the show would go on.

“Our hearts are heavy for the unimaginable tragedy,” the producers said. “Our thoughts are with the families and friends of those affected. The Tony Awards dedicate tonight’s ceremony to them.”

The first comment from the man who’s expected to be the biggest winner of the night, “Hamilton” creator and star Lin-Manuel Miranda, was an image of a rainbow-colored heart and the word “Orlando.”

Other Broadway stars, like Audra McDonald and Kristin Chenoweth, reacted to the attack with horror.

“When will the violence end?” Chenoweth asked via Twitter.

Before Sunday, the headline around the Tony Awards had been whether “Hamilton” would make history. The hip hop musical about Alexander Hamilton is nominated for a record 16 nominations.

“Hamilton” is up for two of the biggest awards: Best Musical and Best Actor in a Leading Role in a Musical (Miranda and co-star Leslie Odom Jr. are both nominees in the category).

The show, which casts people of color as our nation’s Founding Fathers, needs to win 13 awards to break the record for most Tony wins for a musical. The current record holder is held by “The Producers,” which won 12 in 2001.

Although “Hamilton” is expected to sweep most of its categories, some other big wins are also up for grabs.

Stephen Karam’s “The Humans” is a fan favorite to win Best Play and Jessica Lange, Lupita Nyong’o and Michelle Williams are competing against one another for Best Actress in a Leading Role in a Play.