Donald Trump on Saturday deleted a tweet critical of Hillary Clinton after he came under fire for evoking anti-Semitic stereotypes with a graphic that included dollar bills and a six-pointed star.

But 10 days earlier, the same graphic appeared on an Internet message board loaded with anti-Semitic conspiracy theories and neo-Nazi ideology.

The image was posted by an anonymous account on June 22 at 2:16 a.m. EDT in response to a post pointing to news reports that Russian hackers may have breached the Clinton Foundation’s computer systems. 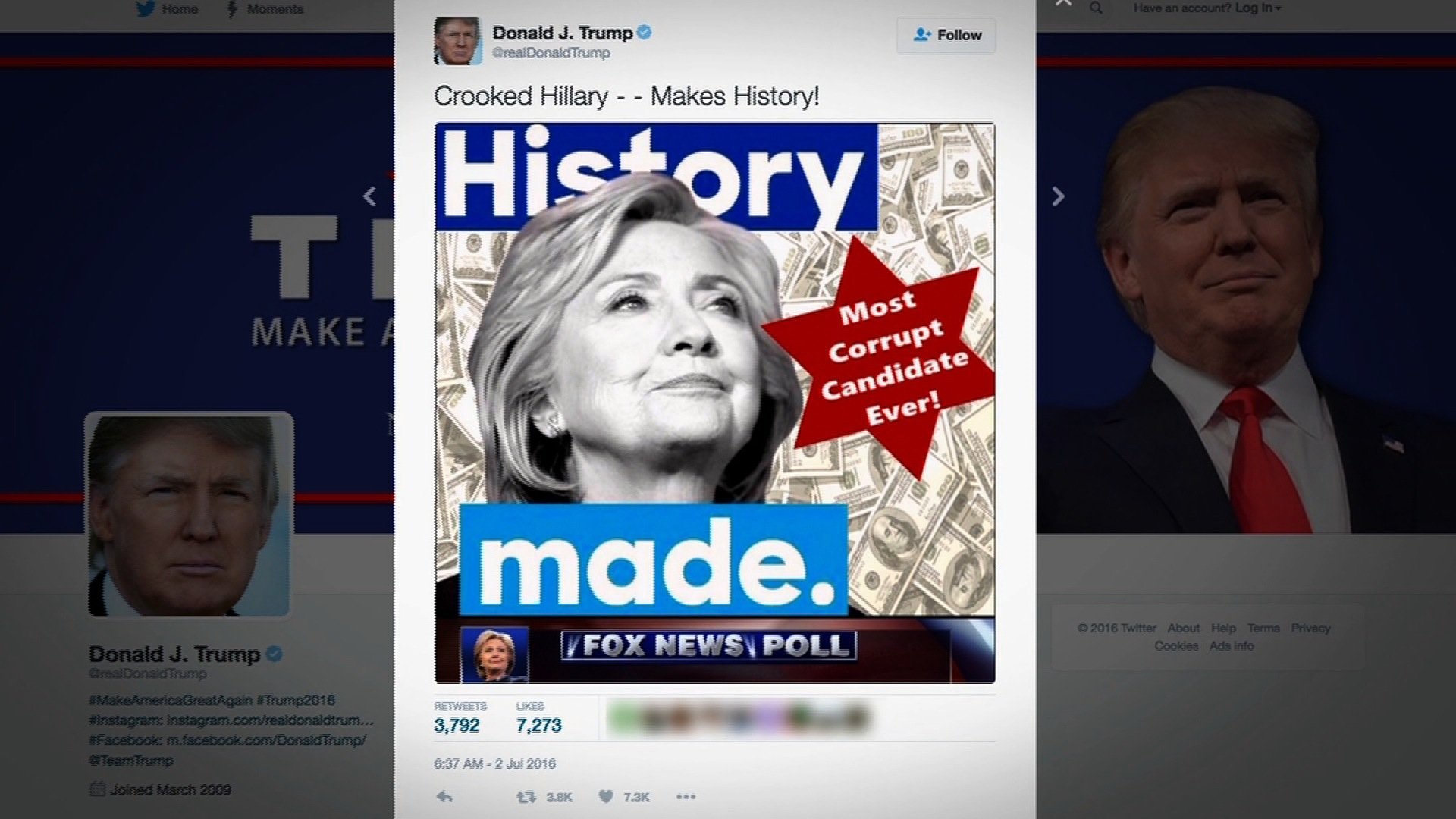 Mic.com first reported that the image appeared on the website. CNN confirmed the report using the internet archiving site the Wayback Machine, which allows users to search archived content on websites from days, months and even years earlier.

The image is identical to the one posted on Trump’s Twitter account, except it does not include the graphic of a Fox News poll.

Just as in Trump’s original tweet, the graphic features a pile of $100 dollar bills and the words “most corrupt candidate ever” on top of a six-pointed star, which evokes the Jewish Star of David.

Before deleting the original tweet, Trump tweeted the same graphic with a tweak: a circle instead of the star.

The Trump campaign did not respond to requests for comment about the decision to use a six-pointed star and whether they were concerned about the potential for the imagery to evoke anti-Semitic undertones.

Former Trump campaign manager Corey Lewandowski dismissed the controversy in an interview with CNN’s Brianna Keilar on “State of the Union” Sunday.

“A tweet is a simple tweet, and the bottom line is you can read into things that are not there. You know, this is a simple star,” Lewandowski said.

He said it’s “the same star that sheriffs’ departments all over the place” use for their badges.

Lewandowski added that criticism of the star is “political correctness run amok.”

Trump campaign officials did not respond to requests for comment about the decision to use a six-pointed star and whether they were concerned about the potential for the imagery to evoke anti-Semitic undertones.

“A Star of David, a pile of cash, and suggestions of corruption. Donald Trump again plays to the white supremacists,” said Erick Erickson, a leading anti-Trump conservative.

Erickson quickly added, “For all the people saying ‘It’s not a Star of David,’ why then did Trump tweet it again after replacing it with a circle?”

Katie Packer, another anti-Trump Republican, asked if Trump was “sending some kind of dog whistle.”

Liberal commentator Alan Colmes, who is Jewish, called it a “disgusting” tweet that “appeals to anti-Semites.”

Abe Foxman, the director emeritus of the Anti-Defamation League, a group devoted to combating anti-Semitism and bigotry, called the tweet “insensitive” but said he was reassured by the campaign’s decision to delete the tweet within a few hours.

“They realized it was edgy and could be abused. I’m not sure the intentions were there but there was certainly a lack of sensitivity,” Foxman said.

Jonathan Greenblatt, CEO and national director of the Anti-Defamation League, said the campaign’s use of an image — previously posted to an anti-Semitic message board — “deeply alarming,” adding that Trump should make clear that those ideas “do not belong in the national conversation.”

“I think it would be long overdue for the candidate himself to speak out firmly and forcefully against, again, not just the rhetoric itself and its inherent anti-Semitism and racism, but on those who would promulgate these ideas,” Greenblatt said.

He agreed the campaign’s decision to delete the tweet on Saturday was a “step in the right direction,” but said “it just boggles the mind” that the campaign would use it at all.

“I get tweeted pictures like this all the time from anti-Semites and racists and white supremacists. The imagery is the classic trope of Jews and money implying that she’s raising Jewish money, or something along those lines,” Greenblatt said. “Does this look familiar to me? Absolutely.”

Trump has staked out a staunchly pro-Israel position, vowing in March that “the days of treating Israel like a second-class citizen will end on day one” of his presidency. And just a day before his tweet about Clinton, Trump tweeted that he was “shocked by the heinous murder” of a 13-year-old Israeli-American Jew who was stabbed to death by a Palestinian terrorist Thursday in her home in a West Bank settlement.

His daughter Ivanka is also an observant Jew — having converted to Judaism before her marriage to businessman Jared Kushner — and Trump has three Jewish grandchildren.

And on Thursday, he immediately rebuked a man at a campaign rally who criticized “Zionist Israel.”

Trump told the man: “Israel is a very, very important ally of the United States and we are going to protect them 100% — 100%. It’s our true friend over there.”

But Trump has also been slow to disavow anti-Semitic white supremacists who have expressed staunch support for his candidacy.

Trump initially refused to disavow the support of David Duke, a former Ku Klux Klan grand wizard who continues to promulgate Jewish conspiracy theories, when pressed repeatedly about Duke’s support in an interview by CNN’s Jake Tapper. He would later tweet “I disavow” regarding Duke’s support and blamed his initial refusal on a faulty earpiece.

And when pressed on the anti-Semitic vitriol and death threats some of his supporters unleashed online against reporter Julia Ioffe over a profile she wrote about Trump’s wife in GQ magazine, Trump said he didn’t “know anything about that.”

“I don’t have a message to the fans,” Trump said when pressed on the anti-Semitic death threats in an interview with CNN’s Wolf Blitzer in May. “A woman wrote an article that’s inaccurate.”

Trump has also previously retweeted tweets from apparent neo-Nazi supporters, including one from the account “@WhiteGenocideTM,” which also tweeted numerous quotes from Nazi propagandist Joseph Goebbels.