SUFFOLK, Va. – A Chesapeake man has been charged with a DUI after crashing into several vehicles and a building.

Police responded to a single vehicle crash at around 4:46 a.m. Sunday. 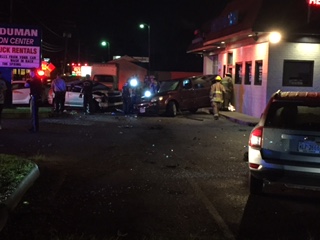 The crash occurred in the 2200 block of North Main Street in the parking lot of Mike Duman’s Rental/Collision Center.

According to police, the vehicle, a Lexus SUV, went across the median and ran off the road, hitting the vehicles and front door of the business. The business building sustained minor damage.

The driver, Keaton Beery, was the only person in the vehicle. He was treated for non-life threatening injuries and taken to a local hospital, where he was treated and released.

Beery has been charged with driving under the influence of alcohol and issued summonses for no valid operator’s license and failure to maintain control.