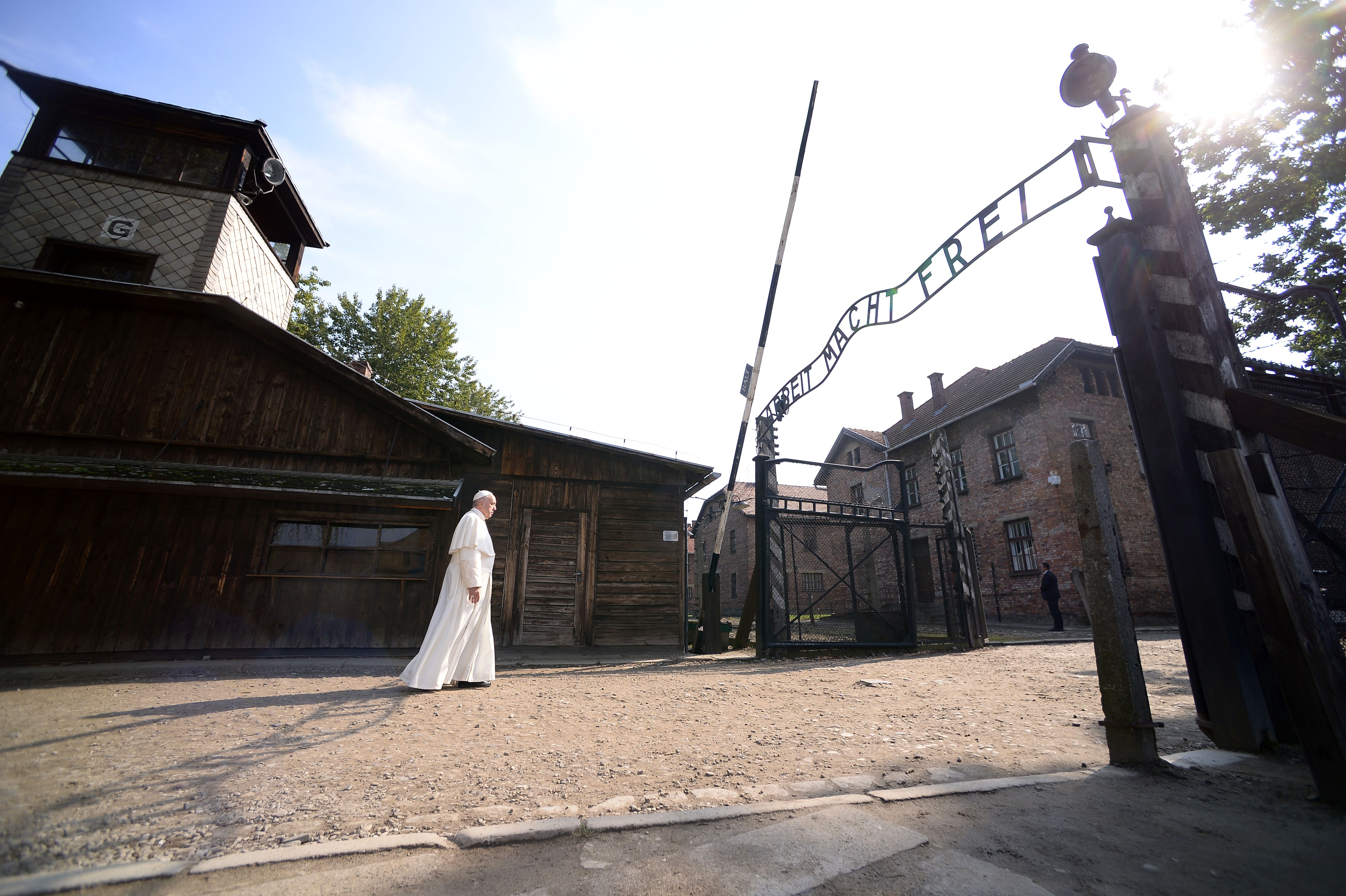 Pope Francis made a historic visit Friday to Auschwitz-Birkenau, the notorious former German Nazi concentration camp in Poland, to pay tribute to the more than 1 million people, mostly Jews, who lost their lives there during World War II.

The Pope arrived early Friday for his first trip to Auschwitz and sat alone for some time by a tree in solemn reflection. He was surrounded by piles of rubble — destroyed gas chambers once used to put Jews to death.

The Pope’s visit to the site of wartime torture and killings comes after his stern warning this week that “the world is at war.”

The Pope met with survivors and their families, including Holocaust survivor and Jewish activist Marian Turski, who was held at the concentration camp.

Turski said he felt the Pope was “like my friend,” commending his ability to relate to people.

He said he was tattooed at Auschwitz to signify he had been “purchased” by the camp.

“I was in this camp until almost the last day and then put in the death march to another camp” he told journalists.

He said the camp commanders would tell the prisoners that surviving for two months was a reasonable time for the Polish. “If you are a priest or a Jew, I don’t think you can survive longer than a week or two weeks,” he said, relaying the commanders’ comments.

A song for the departed

The Pope visited cells where prisoners were held, sitting in the middle of one in prayer, making the sign of the cross before seeing others.

One of the cells held the Polish Catholic priest Maximilian Kolbe, who died in 1941 when he volunteered to take the place of another prisoner set to be executed.

The Pope also visited the nearby Birkenau camp, known as Auschwitz II, where he met with dozens of people who housed Jews or risked their lives to protect them from the Nazis.

They knelt before the Pope and many kissed his hand as Francis handed out little red boxes containing rosaries.

He stood in front of 23 plaques that represented the languages spoken at the camp, holding a hand on his heart in grave silence, as a rabbi sang Psalm 130, dedicated to the departed.

In the camp’s guestbook, Francis signed his name and wrote: “Lord, have mercy on your people! Lord, forgiveness for so much cruelty!

‘When hatred is allowed to fester’

On Thursday, he delivered an outdoor Mass before a huge gathering of young Catholics in Krakow on the 1,050th anniversary of Poland’s “baptism” as a Catholic country.

On his flight to Poland on Wednesday, the Pope addressed this week’s slaying of a Catholic priest in northern France’s Normandy region by two jihadists who declared their allegiance to ISIS.

He told reporters that “the world is at war” but stressed it was not a war of religion.

Ronald S. Lauder, president of the World Jewish Congress, hailed the Pope’s Auschwitz trip as “a strong signal” against hatred and called the Catholic Church leader “one of the closest allies Jews have today in the fight against anti-Semitism and bigotry.”

“Auschwitz is an eternal reminder of what can happen when hatred is allowed to fester, when the world remains silent in the face of evil and looks the other way as unspeakable crimes are being committed nearby,” Lauder said.

“We thank him for going to Auschwitz. His visit there sends an important signal to the world that this dark chapter must never be forgotten and that the truth about what happened seven decades ago must not be obfuscated.”

The Auschwitz-Birkenau camp opened in 1940 in Oswiecim, a Polish city that the Nazis annexed.

It was established as the local prisons grew beyond capacity with the Nazis’ mass arrests of Poles.

But it soon transformed into the largest death camp for Jews and other so-called enemies of the Nazi state.

As the Soviets came to liberate Auschwitz in January 1945, the Nazi SS soldiers destroyed much of the evidence of their crimes at Auschwitz, including gas chambers and crematoriums.

Central to his trip is World Youth Day — an event organized by the church that draws young Catholics on pilgrimages from around the world every two or three years. Young people from 187 countries are expected to attend.

At an early Mass on Thursday in the southern Polish city of Czestochowa, Francis, who is 79, stumbled and fell after appearing to trip on a step. Members of the clergy swiftly assisted him, and the service continued without interruption.