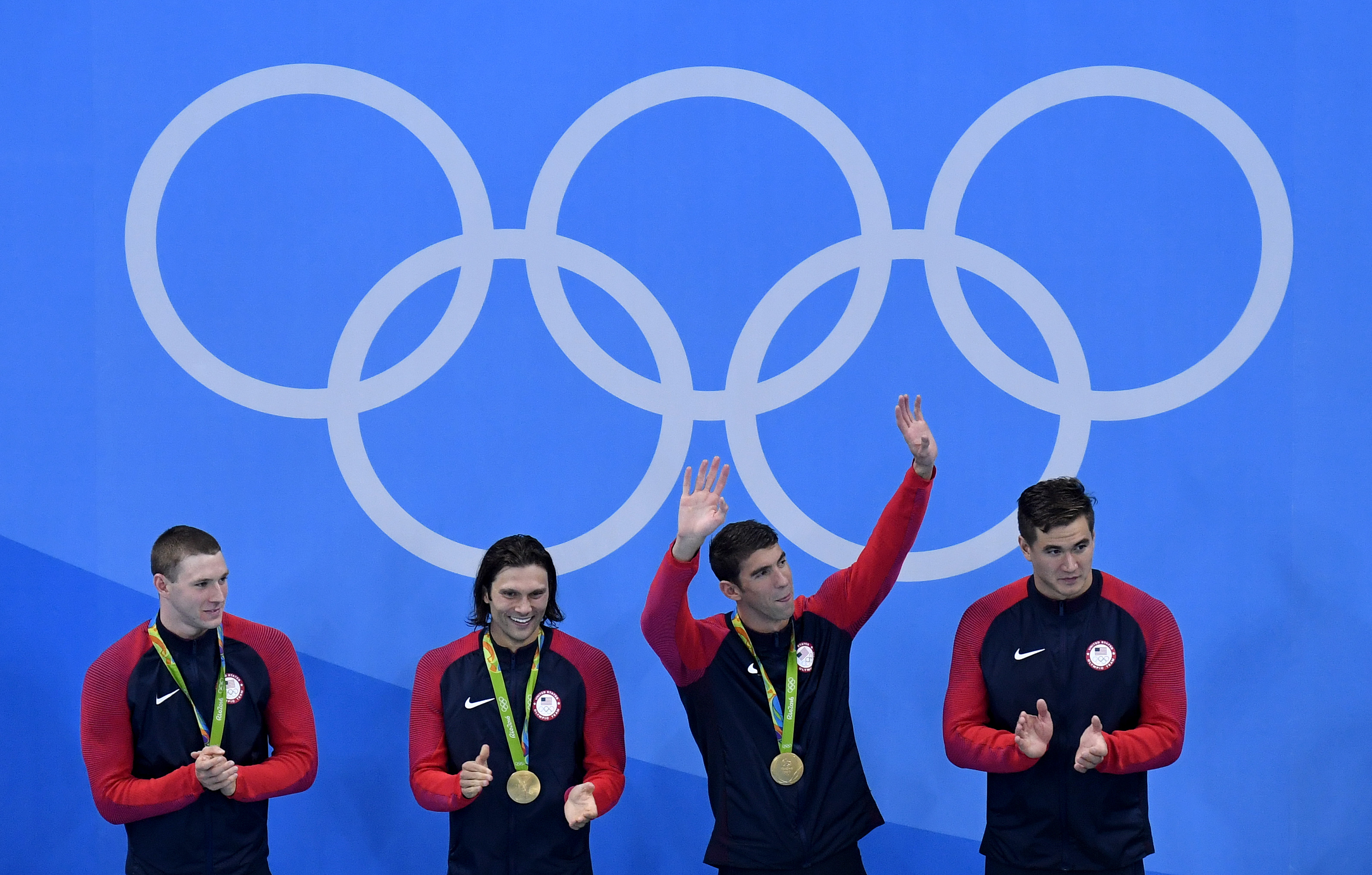 RIO, Brazil – The Olympic curtain came down on Michael Phelps Saturday, but not before he and his US 4×100-meter medley relay colleagues could add another medal to his already record-breaking collection.

Phelps swam the butterfly third leg of a tight race, pushing the US from second behind Great Britain up to first before freestyle specialist Nathan Adrian saw it home for gold in an Olympic record time of three minutes 27.95 seconds.

The win guaranteed the “Baltimore Bullet” his 23rd gold medal in five Games appearances stretching over 16 years, not to mention a fifth win at Rio 26.

Phelps, who now has 28 Olympic medals in total, had earlier told fans in a Facebook Live chat that Saturday would be the last time he graced the Olympic pool.

And the most decorated Olympian of all time was clearly out to leave a valedictory flourish.

Phelps entered the pool with the US trailing Great Britain after Ryan Murphy’s opening backstroke and Cody Miller’s breaststroke leg.

Two lengths later and the US was in the clear and heading for gold.

Swimming is richer because of him, and will be poorer without him.

People talk about the Phelps legacy, with some arguing his greatest contribution is yet to be realized with the list of pool performers he has inspired.

But the current legacy is illustrated in a decade-old photograph of a delighted nine-year-old Katie Ledecky with Phelps — the American teenager is proving to be the dominant female swimmer of these Rio 2016 Olympic Games.

Similarly it was captured on Friday in Rio as Joseph Schooling, who himself had been inspired by the Phelps phenomenon and was photographed with him as a youngster, stood disbelieving on the top step of the 100-meter butterfly podium above the US star.

“We’ve all seen the photo of Katie and I when she was nine, and the photo of Joe and I,” Phelps told reporters after the race. “I wanted to change the sport of swimming. That’s what I wanted to do. With the people in the sport now, I think you’re seeing it.”

It is no idle boast. After each of his triumphant Olympic swimming meets, USA Swimming membership soared.

In the year post-Athens, it rose 7%, after Beijing there was an 11% increase, while what appeared to be his Games swansong in London sparked a 13% rise in those taking up the sport stateside.

A further spike is anticipated by USA Swimming, whose latest figures show that when Phelps made his debut for the team, just 38% of their members were male; that figure is up to 44% and rising.

James Guy is one of the new breed of swimmers in the pool. The 20-year Briton is the world champion in the 200m freestyle and anchored a British quartet in the 4x200m freestyle to silver behind none other than Phelps.

“He’s my hero — one day I hope to be remembered like him,” Guy told CNN. “I’ll remember that for the rest of my life. I just said to him, ‘It’s an honor to race you, you’ve inspired me for so many years,’ and he said ‘thank you very much’ and he gave me a hug, which was nice of him.”

Like Phelps, Mark Foster is a five-time Olympian and now a commentator for UK broadcaster the BBC at these Games.

He argues that Phelps has added to his legacy by reclaiming the title in his signature event, the 200m butterfly, after being beaten by Chad le Clos at London 2012.

“He’s not as unbeatable as he was,” Foster told CNN. “He is human but he came back because he loves it. Swimming is a drug and he’s addicted. London made him mortal but the immortality is back.

“But I’ve never seen a crowd more in love with him than in Brazil. They’re just so into Michael Phelps, he has that effect on people. It’s like watching Usain Bolt, everyone goes bang and realizes its something special. But here they realize it’s finally the end of something special.”

Phelps’ longtime rival Ryan Lochte has said he believes his US teammate will carry on after Rio. However, Phelps — who retired at London 2012 before making a comeback two years later — insists there will be no second U-turn.

“I’m not going four more years, and I’m standing by that,” the 31-year-old said. “I didn’t want to have a ‘what if?’ 20 years later but being able to close the door on this sport how I want to, that’s why I’m happy now.”

The happiness has not always been there. The road to Rio has been rocky at times. There was the DUI arrest in the United States followed by a period of rehabilitation. Then at home there has been the recent arrival of his son Boomer, as much a feature for the camera lenses at the Olympic pool as his famous father.

Phelps was just 15 when John Lohn, US correspondent for the highly-regarded website Swim Vortex, first saw him compete — and he has followed his career in the intervening 16 years.

For him, Phelps’ legacy is shown by the increase in the sport’s US profile.

“To find swimming on a channel in the US that every family could get, it had to be the Olympics,” Lohn said. “But now you’ll see the grand prix meets are televised on cable, while the nationals and international meets have quality coverage. That’s Phelps — singlehandedly he’s elevated the profile of the sport.”

Phelps’ peak was the eight golds in Beijing which broke Michael Spitz’s previous record for a Games by one, although Lohn argues his achievements in Rio have been the next best.

“He doesn’t need this, his legacy is going nowhere, which makes this more amazing,” he said. “No one will ever match those titles but he always wants something else. The 200m butterfly put him on the map in the first place and he wanted it back.

“It doesn’t matter if he’s got one, 19 or 23 gold medals, he doesn’t think like that. He thinks like he’s trying to win his first medal. He has a competitive switch you only see in very few people. Michael Jordan had it … that killer instinct.”

Arguably it was best highlighted ahead of the 200m butterfly semifinals, when Le Clos shadow-boxed in front of Phelps — and the American reacted with a death stare that went viral.

“He looks for anything that might motivate him, so what Chad did was not intelligent,” Lohn argues. “Why would you poke the tiger? He doesn’t need extra motivation so why give it to him?”

The Phelps of 2016 has been unlike any other Games. Now a father and with all the titles to his name, he has appeared more relaxed and enjoyed it far more.

Lohn says his relationship with Phelps is also more relaxed.

“From my experience, he’s never let me into his world. That’s changed,” he added.

“Four years ago with that first music video, he was in it for a split second and his face said, ‘I’ve got work to do.’ This time, he embraced it. He’s smiled more than I’ve ever seen him smile, he’s like a different person.

“Before it was like he was on a business trip ticking boxes. Now he enjoys it and that’s been great to see.”

The Phelps era is now over. What he has done will likely never be bettered. Swimming will miss him but those he has inspired will continue on.

His lifelong coach Bob Bowman knows he will never work with another swimmer quite like him.

When asked to describe in one word what Phelps had achieved and the wider impact on the whole sport, he simply said “remarkable.”