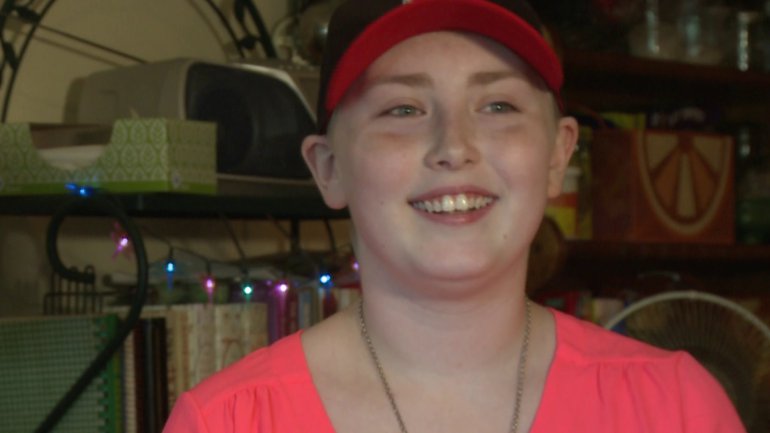 CHESTERFIELD COUNTY, Va. – When you’re fighting for your life it’s always good to feel like you have a superpower or a superhero in your corner.

“I didn’t think it would ever work,” Lilley Sickal told WTVR. “Or that he would ever see it. It makes me believe that miracles can happen.”

Imagine the surprise when the 16-year-old from Chesterfield had her Twitterverse rocked with a custom message from her favorite Marvel superhero, Captain America.

“I watch it over and over,” said Lilley. “It gives me hope that… if he can take time out of his day and do that, anything can happen. He was saying my name. It was amazing.”

Evans reached out to the teen after his mentions blew up with tweets from fans all over the world, retweeting #Lilley’sWish.

“I don’t always read comments on Twitter because sometimes they’re mean.” Evans said in the message.

“He was sitting in his kitchen just like this and he was talking to Lilley,” said her mother, Katie Toler. “All I can say is, ‘Thanks, Chris Evans. We appreciate it.’  I don’t have enough brownie emoji’s to thank everyone on Twitter. Tweeters will get that joke.”

After reading Lilley’s story, the Avenger himself was in awe.

proof that chris evans is possibly the kindest, most caring person alive. pic.twitter.com/JN0dAfXaXg

“They told me you were a fan of mine, which tells me you are a wildly intelligent human being with impeccable taste,” Evans continued. “You may not want compliments for something you didn’t choose, but I’ll say it anyway: I’m grateful to know you.”

Lilley’s life is far different from her peers: she’s had numerous surgeries and chemo sessions only to be told the cancer is back.

She has soft tissue sarcoma, with new tumors in her pelvic area and right lung. Lilley’s is only the 41st documented case in the world.

“She’s isolated in pain. It takes a tremendous toll on everyone in the family, physically, emotionally and financially,” said Lilley’s cousin Hailey. “But she seldom complains, and is always a trouper on this very difficult journey.”

A journey Lilley has tackled with a superhero spirit.

Perhaps her superpower is a bright, big smile and a huge heart that welcomes anyone wanting to fight this battle with her.

“I have a wonderful family who’ve done a lot of support for me. Now I can add Chris Evans to the list,” said Lilley.

Lilley has one more wish she’d like others to fulfill, and that’s asking folks if they donate to local cancer charities to help children like her.