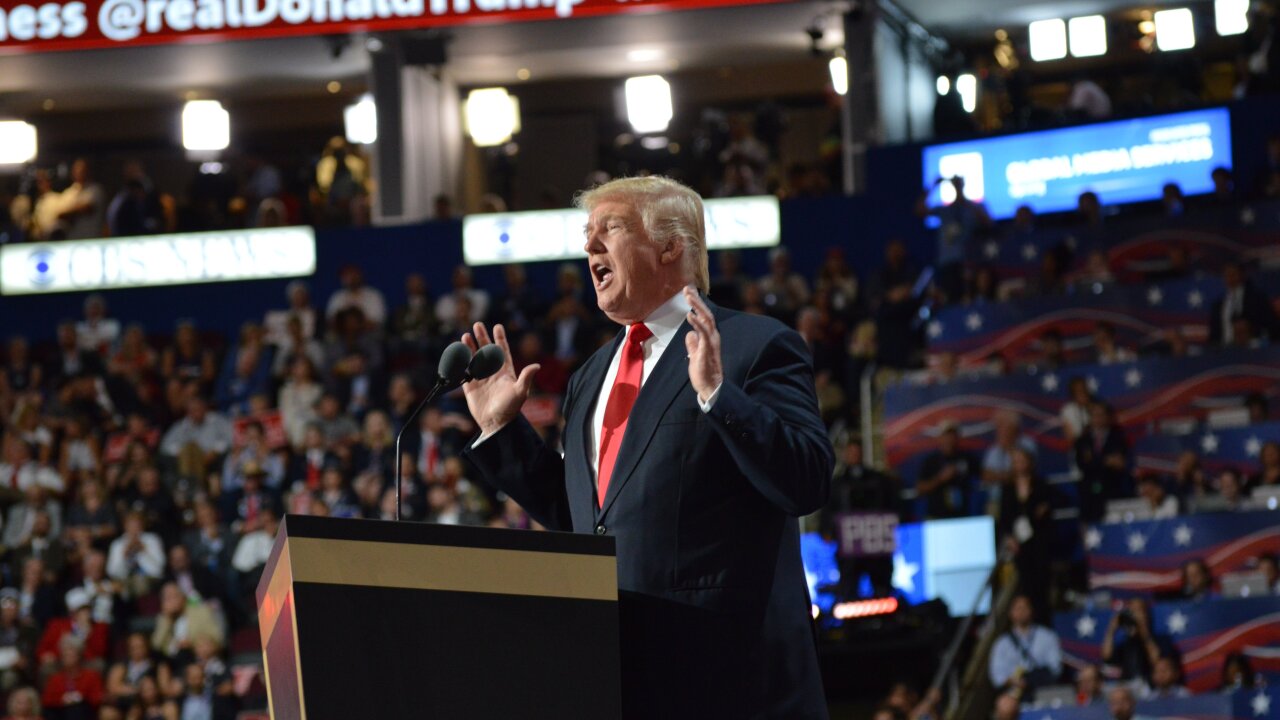 Donald Trump speaks after he accepted the nomination for president of the United States at the Republican National Convention in Cleveland, Ohio on Thursday, July 21, 2016.

Donald Trump on Thursday shelved his guiding mantra — never back down, never apologize — and did what he has refused to do in public in more than a year of campaigning.

Trump, reading from prepared remarks Thursday night, acknowledged that he sometimes says “the wrong thing” in an astonishing act of contrition that signaled Trump’s willingness to break from his characteristic brashness and bare-knuckles style that carried him to victory in the Republican primaries, but risks dooming him in the general election.

“Sometimes, in the heat of debate and speaking on a multitude of issues, you don’t choose the right words or you say the wrong thing. I have done that. And believe it or not, I regret it. And I do regret it, particularly where it may have caused personal pain. Too much is at stake for us to be consumed with these issues,” Trump told supporters here.

He added: “But one thing I can promise you is this: I will always tell you the truth.”

The real estate mogul did not say which of his numerous controversial statements he regretted.

Trump’s remarks came on the heels of recent controversies that ranged from feuding with the parents of a slain Muslim-American soldier to suggesting “Second Amendment people” could act to stop Hillary Clinton from appointing a liberal Supreme Court.

Trump’s public expression of regret also followed his decision earlier this week to shake up his campaign leadership, installing a new campaign manager and bringing on a campaign CEO.

A senior Trump adviser told CNN the speech was only just written in recent days, suggesting the influence of Trump’s fresh team of top advisers.

Trump’s campaign shakeup — particularly bringing on the head of the controversial, far-right Breitbart News — was widely considered a return to the “let Trump be Trump” mantra that guided Trump’s campaign to victory in the Republican primaries.

Trump’s new campaign manager, Kellyanne Conway, suggested in her first days on the job that she favored that strategy, but that she would also seek to “sharpen” Trump’s campaign message, in part with scripted speeches like Trump delivered on Thursday.

“We’re going to make sure Donald Trump is comfortable about being in his own skin, that he doesn’t lose that authenticity that you simply can’t buy and a pollster can’t give you. And voters know if you’re comfortable in your own skin,” she told CNN’s Alisyn Camerota on “New Day” Thursday morning.

“And let him be him in this sense: He wants to deliver the speech, if he wants to go to a rally, if he wants to connect with the crowd in a way that’s very spontaneous, that’s wonderful. And that’s how he got here,” Conway continued, adding, “But at the same time, we have some really serious, pressing problems in this country that I’m hoping will start to be addressed more by the media.”

While Trump’s remarks Thursday marked a seismic change in the brash billionaire’s style, it is still not clear whether the change was the mark of a lasting shift in strategy and tone.

Trump has repeatedly hinted at striking a more inclusive and presidential tone, but has also said time and again that he does not want to “change” or “pivot.”

“I am who I am. It’s me. I don’t want to change. Everyone talks about, ‘Oh are you going to pivot?’ I don’t want to pivot. You have to be you. If you start pivoting you are not being honest with people,” Trump told local Wisconsin station WKDT this week.

The Clinton campaign immediately expressed doubt over the sincerity of Trump’s contrition, calling it “teleprompter regret” and pressed Trump to go further.

“Donald Trump literally started his campaign by insulting people. He has continued to do so through each of the 428 days from then until now, without shame or regret,” Clinton spokeswoman Christina Reynolds said in a statement. “We learned tonight that his speechwriter and teleprompter knows he has much for which he should apologize. But that apology tonight is simply a well-written phrase until he tells us which of his many offensive, bullying and divisive comments he regrets — and changes his tune altogether.”

Trump also sought to use his speech Thursday to appeal to African-American voters, an important voting bloc in the battleground state of North Carolina.

Reading from a teleprompter, the businessman vowed as president to address the poverty and unemployment that has disproportionally affected African-American communities and urged black voters to “give Donald Trump a chance.”

“The result for them will be amazing,” he said. “What do you have to lose by trying something new?”

Trump’s expressed regrets mark a sharp turn from his strategy of admitting no fault, going back to the start of his campaign 14 months ago. When asked in interviews about specific instances where others have taken offense, Trump has always pushed back hard.

Asked in May whether he regretted denigrating Arizona Sen. John McCain’s five-and-a-half years as a prisoner of war in Vietnam last summer — “I like people that weren’t captured,” he said — Trump declined.

The Republican took a similar approach after skirmishes broke out in March at a rally of his in Chicago, which was postponed for safety reasons.

Trump told CNN’s Don Lemon he had no regrets.

Most recently, Trump said he wouldn’t change anything about his response to Khizr and Ghazala Khan, the parents of a slain Muslim-American soldier.

“I don’t regret anything,” Trump told Washington, D.C. television station WJLA earlier this month. He pushed back against the couple for taking the stage at the Democratic National Convention and questioning whether Trump know what “sacrifice” meant.

“I said nice things about the son and I feel that very strongly, but of course I was hit very hard from the stage and you know it’s just one of those things. But no, I don’t regret anything.”

Trump did, however, acknowledge to The New York Times’ Maureen Dowd in April that retweeting an unflattering photo of Texas Sen. Ted Cruz’s wife, Heidi, was “a mistake.”