Mother Teresa declared a saint before huge crowds in the Vatican

Mother Teresa, a Catholic nun who devoted her life to helping India’s poor, has been declared a saint in a canonization Mass held by Pope Francis in the Vatican.

Pope Francis delivered the formula for the canonization of the Albanian-born nun — known as the “saint of the gutters” — before huge crowds of pilgrims gathered in St. Peter’s Square in Vatican City on Sunday morning.

Applause broke out before he completed the formula of canonization, in which he declared “Blessed Teresa of Calcutta to be a saint.”

India renamed the city of Calcutta to Kolkata in 2001 to match the Bengali pronunciation. But the church uses the spelling of Calcutta in its references to Mother Teresa.

Speaking in Latin, Francis said that “after due deliberation and frequent prayer for divine assistance, and having sought the counsel of many of our brother bishops, we declare and define Blessed Teresa of Calcutta to be a saint, and we enroll her among the saints, decreeing that she is to be venerated as such by the whole church.”

Catholics — including hundreds of blue- and white-robed nuns from the Missionaries of Charity sisterhood founded by Mother Teresa — had gathered from around the world to attend the canonization of the church’s newest saint, just 19 years after her death.

A huge portrait of Mother Teresa, whom the church credits with having performed two miraculous cures of the sick, hung from St. Peter’s Basilica during the colorful ceremony. 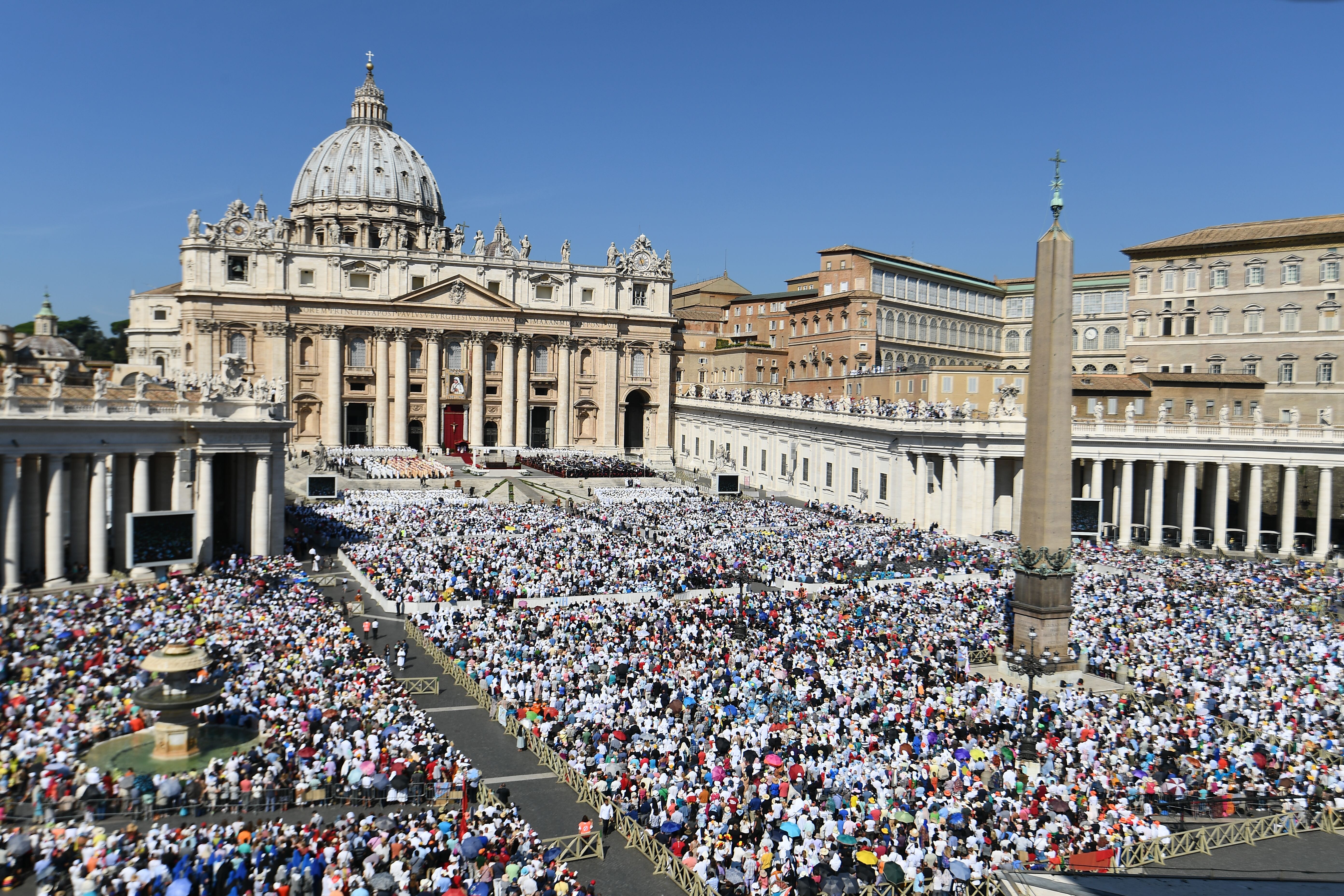 Francis: ‘May she be your model of holiness’

Pope Francis then delivered a homily, in which he praised Mother Teresa — “this emblematic figure of womanhood and of consecrated life” — for her charitable work.

“Mother Teresa, in all aspects of her life, was a generous dispenser of divine mercy, making herself available for everyone through her welcome and defense of human life, those unborn and those abandoned and discarded,” he said.

“She bowed down before those who were spent, left to die on the side of the road, seeing in them their God-given dignity. She made her voice heard before the powers of this world, so that they might recognize their guilt for the crime of poverty they created.”

For the newly-sainted Teresa, he said, “mercy was the salt which gave flavor to her work, it was the light which shone in the darkness of the many who no longer had tears to shed for their poverty and suffering.”

She was an example to volunteers around the world, he said. “May she be your model of holiness.”

In a departure from his scripted remarks, he noted that people “may struggle” to refer to her as “Saint Teresa.” “With great spontaneity, I think we will continue to call her Mother Teresa,” he said.

Prayers were then delivered in a number of languages, including Albanian, Mother Teresa’s native tongue, and Bengali, the language of Kolkata, where a special Mass was celebrated at the Missionaries of Charity Sunday. A prayer was delivered in Chinese for persecuted Christians around the world.

About 1,500 homeless people from across Italy were bused into the Vatican to be given seats of honor at the Mass — and be served a pizza lunch by nuns afterward.

Most of the Catholic Church’s saints or blessed people are honored decades, if not centuries, after their deaths. Traditionally, there is a mandatory five-year waiting period before formal evaluation of a candidate for beatification can begin.

Mother Teresa’s devotees began pressing the Vatican soon after her death to speed up the nun’s sainthood cause, saying her holiness was clear to many around the world. Pope John Paul II granted the special dispensation in 1999, and the procedure began.

The pope waived the waiting period in part, some believe, because of her fame and reputation.

John Paul II further paved the way for her beatification in 2002, when he approved a miracle attributed to Mother Teresa after her death.

The approved miracle involved Monica Besra, a 30-year-old Kolkata woman who said praying to the nun cured a stomach tumor. The Vatican committee said in October 2002 that it could find no “scientific explanation” for the woman’s recovery.

“I took doctors’ medicines, threw up and was in a lot of pain. But when I prayed to Mother Teresa from my heart, Mother Teresa blessed me and now I am healthy,” Besra told CNN last week.

“My entire village and I am very happy that she is being made a saint.”

Pope Francis formally announced that Mother Teresa would be declared a saint in March 2016, when he recognized a second miracle attributed to her.

A Brazilian man with multiple brain tumors was healed after loved ones prayed to Mother Teresa to heal him, according to Avvenire, a newspaper affiliated to the Catholic Church.

‘Saint of the gutters’

Born Agnes Gonxha Bojaxhiu in 1910, Mother Teresa set up her Missionaries of Charity in the slums of Kolkata in 1950 and made her headquarters in the Indian city for nearly half a century.

Her small figure, often in a white-and-blue sari and sandals, became familiar around the world. She died in Kolkata in 1997 at age 87.

Earning global recognition for her unending work and compassion for the poor, Mother Teresa was awarded the Nobel Peace Prize in 1979.

The Norwegian Nobel Committee said her spirit and the respect she had for the worth and dignity of human beings inspired constructive efforts to do away with hunger and poverty.

However, Mother Teresa’s legacy has been criticized. Her critics say her charity isn’t financially accountable and volunteers aren’t properly trained. And some doctors claim Besra was healed by modern medicine, not by prayer.

The nuns and priests from the Missionaries of Charity continue her work around the world, including some ex-communist countries where she was banned. Her order has offices in Europe, Africa, the Americas and Australia, as well as Hong Kong and Russia.

A group of nuns will travel to the Vatican for the canonization ceremony, and those who remain in Kolkata will mark the day with prayers of thanks.